By sticking together and supporting each other, owners can help in the battle against heartless dog thieves. Julie Hill reports.

While dog theft is devastating, it is still relatively uncommon.

In 2020 — when the pandemic saw a surge in demand for dogs — there were approximately 2,000 incidents of dog theft reported to police forces across the UK, which equates to around five dogs per day.

Statistics gathered by The Kennel Club through Freedom of Information requests, using figures from 36 UK police forces, show that was a seven per cent increase on 2019.

Arriving at any definitive statistics is challenging, as no national tally is kept, but mainstream media outlets latched on to dog theft during the pandemic, and momentum grew around the issue, giving it a high profile. With more cases hitting the headlines, awareness of dog theft has certainly increased, and that will hopefully put owners on their guard, and keep dogs safe. For example, Dogs Trust’s theft prevention page had 780 per cent more visits in 2021 than it did in 2020.

While the national situation remains vague, some facts emerge from comparing different regions.
The police force with the highest number of reported dog thefts is the Metropolitan Police, followed by West Yorkshire, Kent, Lancashire, and Northumbria.

Dog theft is a danger, and the degree of danger can vary depending on your postcode, and the breed, age, and size of your dog. Younger dogs, and smaller, more portable dogs are easier to steal and sell on.

However, beware of headlines trumpeting pet theft statistics, because they’re probably geographically specific, and not applicable to your area. The best advice is to stay calm, be careful — and be kind to other victims of this crime.

It’s one of the worst crimes that can affect people, and it changes your life forever,” said Debbie Matthews, who has run the Vets Get Scanning campaign since 2006 when her own dogs, Widget and Gizmo, were stolen.

Debbie and her father, Sir Bruce Forsyth, made television appeals, and thankfully the two Yorkshire Terriers came home. Since discovering the prevalence of dog theft, Debbie, who lives in Sussex, hasn’t left her dogs in a car, and has inspired countless others to follow suit.

However, in reality, situations occur and mistakes are made — everyday life is full of imperfection. Frequently, those whose dogs have been taken from a vehicle are heavily criticised, particularly online, but surely our wrath is better aimed fairly and squarely at the criminals, rather than unfortunate dog owners?

“It’s quite bizarre, because they’re actually attacking owners at their lowest ebb — of course they know they shouldn’t have left the dog in a car outside the shop or even in the garden alone — but these things happen. These people need support from other dog owners,” said Debbie, who has seen the positive results of a stolen dog being shared online, resulting in them being reunited with their families. 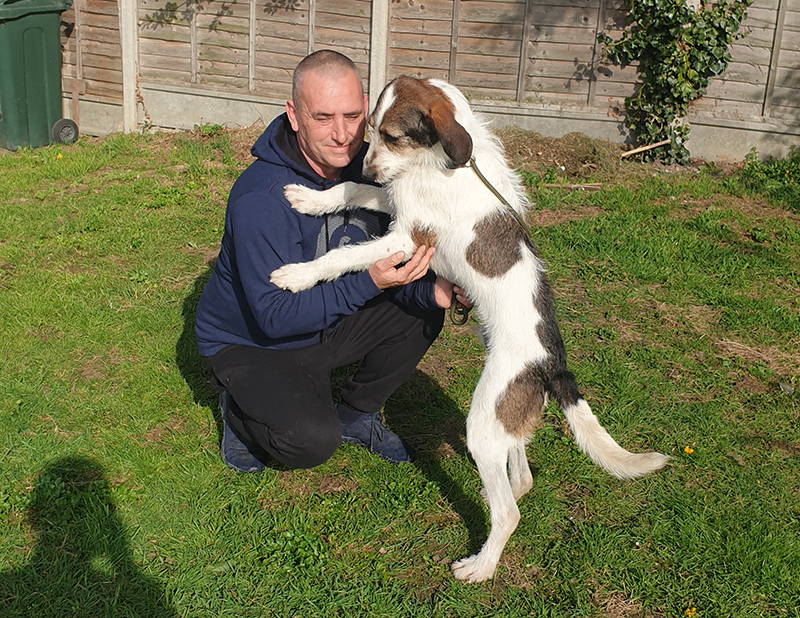 Wayne May devotes his life to keeping dogs safe and is the police liaison for DogLost and the Stolen And Missing Pets Alliance (SAMPA).

Wayne May, from Dartford, Kent, is the police liaison for DogLost and the Stolen And Missing Pets Alliance (SAMPA). He says he has seen “a massive rise” in the level of dog theft in the past two years.

“People think it won’t happen to them,” said Wayne. “Dog theft is rare when you look at crime in general, but a dog is still a member of your family and when it happens it’s devastating.” Wayne had six dogs stolen in 2008. “They ran me over to steal my dogs. We emailed every dog warden in the UK within three days, and
I only got three out of the six dogs back,” he recalled.

The DogLost website enables you to create and share a poster to raise awareness of your stolen or missing dog. DogLost was founded by Jayne Hayes after her French Bulldog was stolen in 2003, and offers practical help and advice to distraught owners. The fact that many who have their dogs stolen go on to devote their lives to helping fellow victims is a testament to the devastation wrought by dog theft.

As well as supporting other dog owners, there are steps you can take to minimise your own dog’s risk of being stolen.

“Every area has its own group for residents on social media, and you can meet up and go on a joint walk,” Wayne recommended. “When you take your dog for a walk, change your routine; instead of turning left every day, turn right. Don’t go to the same park every time and stay in a built-up area.”

Louise Lee, senior media officer for the animal charity Blue Cross, revealed: “The actual home is the most common location for dog thefts. Make sure gardens are secure and, if possible, not visible to passers-by. Always keep an eye on your pet when they’re in the garden.”

Certain attributes make dogs less attractive to thieves and Louise also suggested: “Make sure your dog is neutered and state this on their tag, in addition to your name and address. Report the theft to your microchip database so they can mark on the record that the pet is stolen.”

We buy health insurance but hope our dogs stay well, and similarly, although we all tend to think our dog won’t be stolen, it’s best to be prepared.

Debbie recommends storing relevant details on your phone. “I keep my dog’s microchip number on my phone. I’ve also got the phone number for the microchip database and the local animal warden. If something did happen when we were out, I’ve got the information with me at all times.”

Read the rest of the feature in the June issue, available to read instantly on our digital edition HERE or purchase the print edition HERE.