Canine courage - the dogs who have beaten the odds! When disaster calls, maybe we all need to ‘be more dog’ and carry on. Julie Hill reports on some amazing recoveries.

Alex was trodden on by a horse, but clung to life with terrier tenacity, and now you wouldn’t know he had been ill; Amaya was scheduled to be put down when her racing career came to an abrupt end following a leg injury, but now few people spot the fact that she has only three legs; and Mabli wolfed down a foam ball, which resulted in her having a fair chunk of her intestines removed, but is full of Lurcher liveliness once more.

When your dog suffers a life-changing injury or condition, it’s easy to despair. But nothing is certain in life — and these plucky dogs beat the odds and not only survived, but thrived. With loving owners by their sides, dogs can make amazing recoveries. 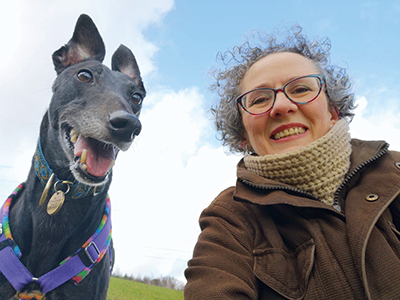 When Greyhound Amaya was just five years old, she fractured her hock. Her racing career abruptly ended — and so, almost, did her life.

“It’s quite a common injury because of the speed the dogs race at, the corners, and sometimes because of the quality of the track,” explained Amaya’s fosterer and now owner Rachel Jackson, from Stockport, Cheshire. “Amaya was examined, a nd was due to be put to sleep, but luckily a lot of the rescues have people on hand at some of the tracks, and basically they said: ‘Sign her over, we’ll take her.’”

Amaya was lucky in that charity Forever Hounds Trust got her the veterinary treatment she needed, but, sadly, her leg could not be saved.

“The vet decided she was better to have the leg amputated,” said Rachel. “The rescue didn’t want her to go into kennels after the surgery, so they were looking for a fosterer who would be able to manage because it’s a massive surgery. I’d fostered and adopted from them before, and I’m a physiotherapist, so I could do the rehab, and I wasn’t overly fazed by having a dog with an amputation.”

Initially, Amaya required a lot of assistance. “She needed help getting up for about a week. We used a sling and helped her to get in and out to go to the toilet. We put her in the dining room so that she didn’t have to have anything to do with the other dogs because obviously she wasn’t fully mobile yet. She was quite reliable at not licking or nibbling the wounds, but she wore an Elizabethan collar when we weren’t around. She did amazingly well, and she was great during physiotherapy sessions, quite settled and relaxed. I also used a lot of Tellington TTouch to help her find her balance and body awareness again.

“Her recovery was quite considerable; it took a good few months for the wound to heal, the stitches to be removed, and then to make sure she was moving the best way she could.”

Gradually, Amaya gained a good quality of life. “If the other dogs are standing around she prefers to lie down, but she goes on walks with them. We have to be careful with surfaces, because obviously she hasn’t got the same balance as the other dogs; we’ve got carpets in most rooms.
I don’t let her jump in and out of the van, I lift her in. But actually, so many people see her moving and say: ‘Oh, I didn’t realise she’d only got three legs!’ because she just gets on with life. She’s amazing, she really is, and such a character!”

Eventually, instead of moving on, Amaya found her forever home with Rachel, who finds her dog an inspiration. “She has  a very gregarious nature; she enjoys meeting people and other dogs. She loves hoopers, and we do some mantrailing, which she really enjoys as well. She’s an all-round lovely dog!”

Nine-month-old Lurcher puppy Mabli was enjoying a walk in a private, hired field when the seeds of disaster were sown. “She’s young, very excitable, and her recall is sketchy, so every so often I hire this local field where it’s all fenced in,” explained owner Helen Conway, from Wrexham, Denbighshire. “She can run around like an idiot, and I don’t have to worry about her jumping on strangers.

“Mabli found this tennis-ball-sized foam ball in the grass, and loved it. I don’t know why, but there was no way she was giving it up. No treat was good enough to swap for this ball, and in the end, to avoid us getting the ball off her, she swallowed it practically whole. She spent the next 24 hours vomiting it back up” — or so Helen thought.

Read the rest of the feature in the June issue, available to read instantly on our digital edition HERE or purchase the print edition HERE.