Your dog can be friends with the vet! 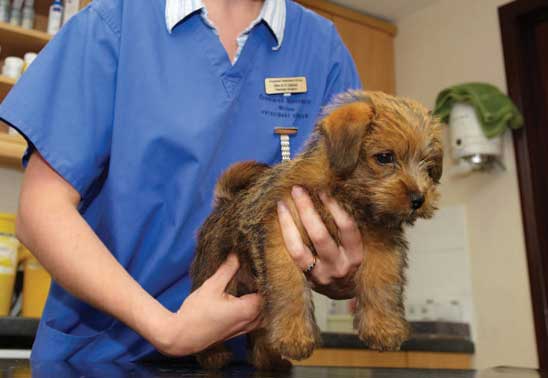 Behaviourist Jackie Drakeford explains how your puppy can be best friends with your vet.

It is difficult to make your new puppy's first experience of the vet a positive one.

Ideally you should work up to it in stages, having first accustomed puppy to the sights, sounds, and smells of the waiting room and surgery before any treatment. But in practice, he usually comes home to you and then sees the vet within a few days because of the imperatives of the vaccination schedule, plus your own desire to have him checked over for hidden health issues.

From the puppy's point of view, he has lost his mother, siblings, and everything safe and familiar, and is now under bright lights, surrounded by strange smells and noises, being checked over in a highly intrusive manner by a stranger, and then probably having a needle stuck into him. If compulsory microchipping before puppies leave their breeders becomes law, then this will be the second major needle experience, the third if he also had his first vaccination at the breeder's - and it's a rare puppy who doesn't put two and two together here. So you're fighting a rearguard action in trying to convince a puppy that going to the vet's is a good experience.

It is in your own interests and those of the puppy, and veterinary staff, that you get this right. You want to avoid the vet seeing your name in the appointments book and having to curb a desire to sneak out of the window!

At home, accustom the puppy to being checked all over his body every day. This doesn't have to be done all in one session. The puppy having a tummy rub can have his paws rubbed too, and when he has a snuggle, you can look into his ears and mouth, gently and briefl y, giving a tiny treat for a reward afterwards.

Aim to open his mouth and look inside, fold back each ear and peer into it, lift eyelids and look into eyes, lift his tail and check underneath, gently touch all over, every place without exception, rewarding each moment of contact at the time, and with a big reward at the end of each session.

It is also important to accustom puppy to the concept of being restrained, again very gently. He should be comfortable with being held by the scruff, around the chest, having you standing next to him with one hand around his chest and the other under the tuck-up where his tummy meets the hind legs, and him sitting with his back between your legs, just a second or so to begin with, then for a little longer, rewarding every time with a game or a treat.

Many people grab a dog by the collar when they are cross with him or want to move him in a hurry. This is a great way to make a dog fearful or snappy when he sees a hand coming towards his neck. Again, take time to accustom your puppy to being touched all round the collar area, and being gently restrained by the collar, but never snatch at this area. A hand on the collar should never precede a fearful occurrence. Then you will be able to do so much more with your dog's cooperation. 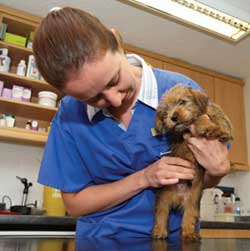 On the table top

The next phase is for puppy to feel comfortable off the ground, because he is likely to be examined on a table at the vet's. Again, start low, such as with a cushion or a plank on the ground, and build up to higher surfaces, lifting puppy on and off, preceded by a word that warns him that he is about to float through the air rather than taking him by surprise, which can become a cause of fear or resentment.

Never let a puppy jump off a high surface because of potential damage to his joints - although when older he can be trained to jump on to a table, which always impresses vets! Should you do this, make sure that he doesn't show off his new trick by extending his repertoire to the kitchen table, or indeed the worktops. I train my dogs to jump into the car on a specific command that isn't used in any other situation, and then extend that remit to the vet's table.

Do not keep your puppy on the practice table for any longer than is necessary, and always hold him while he is up there so that he is never tempted to jump off. Hold him by the collar or body, as a dog jumping off who has been held only by the lead risks injuring his neck.

Your objective is that your puppy finds being on a table and being checked all over is pleasant, doesn't last long, and is always very rewarding.

Then you have to move this behaviour to the vet's, and to the groomer's as well, if your dog is a type that will need professional grooming. As you are already taking puppy for a variety of short car journeys, stop in the vet's car park on the way back from one when puppy is fairly tired. Sit there for a few minutes, watching clients and their animals coming and going.

After a couple of these sessions, assuming puppy has had his injections, liaise with the practice to find a time when there are no other patients, and take puppy into the waiting room, up to the reception desk, give him a treat, and walk straight out again. If he is too overwhelmed to take the treat, don't persist, but go straight out and treat when he is ready to accept it, which might not be until he is back in the car.

With puppy setting the pace, arrange with the clinic staff to visit each day until puppy is completely confident with the waiting room, the reception desk, and the staff (who will love him). Gradually increase the time you spend in the waiting room.

When he is at home there, the vet can meet him, first in the waiting room, next in the surgery, and once confident in there, puppy can be lifted on to the table. Keep these sessions very short: one or two minutes is plenty at first, building up to longer. People tend to push boundaries too soon and too far: be happy with tiny victories and quell any temptation to push on to the next stage before puppy has absorbed the current one.

Many vets will begin a short clinical examination once puppy is more confident, which is a great way of getting him used to being looked over. As you are effectively using the veterinary staff to train your puppy, be sensitive to their schedules, and remember a tin of biscuits for their tea break never goes amiss.

Next comes the really tricky part - the waiting room with patients in it. As ever, start with small challenges, and avoid busy times. Your remit is not to have puppy excited and eager to meet all the other animals and people, but for him to ignore them as best he can (it is, after all, really interesting), and focus on you and your rewards.

Sit where he can watch while he feels protected under your legs or on your lap. If people want to come to greet him and you are happy he can cope with that, you can allow it, but he must not go to other people. In that waiting room there may be people who are very distressed and animals that are feeling vulnerable; they do not want a puppy, no matter how lovable, inspecting them. It can be trying when you have deliberately sat out of the way and a less aware person then sits next to you with a wailing cat or a frightened bunny, and even worse when others let their dogs lunge at other patients.

A few people let their children run riot in the waiting room too, which is extremely stressful to most animals when they are well, never mind when they are feeling below par, but of course the little ones have no understanding of this. Be conscious of how your puppy is reacting to any disturbance, and take him out if you think it's getting too much for him.

One surgery I know has a big notice in the waiting room which politely states that people should keep their pets and children away from others and not allow pestering, and this includes saying hello to other animals. The other matter to be aware of is that some selfish people may bring in a dog with an infectious condition such as kennel cough, and if you suspect this, don't wait for the staff to intervene, but take puppy back to the car, carrying him if necessary, and do not let him sniff noses with any other dog. 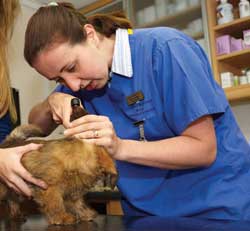 Before and after a proper consultation, there are ways to make the experience easier for all. First, make sure puppy has had plenty of opportunity to empty out, and take a urine sample if you think it would be helpful. Make sure your container is really clean, as it is all too easy to get a false sugar reading from a tiny speck left in a jam jar.

Allow enough time to give puppy another opportunity to empty out upon arrival. Take something familiar for your puppy to lie on in the surgery, such as a towel, so that he settles while you and your vet are consulting.

Do not feed puppy for a few hours before your appointment; he won't starve to death from one missed meal, and if he does need treatment involving an anaesthetic, it can be given sooner. If he has an accident in the waiting room, tell the staff right away so they can clear up and disinfect. They won't be angry, they've seen it all before, but they do need to know before someone else steps in it and makes even more mess.

Familiarising your puppy to the veterinary surgery takes time, because you can only go at the individual puppy's pace. It is a lot of work but well worth doing, and you will become one of your vet's favourite clients.