Your Dog chats to Sean Laidlaw about his rescue dog, Barrie 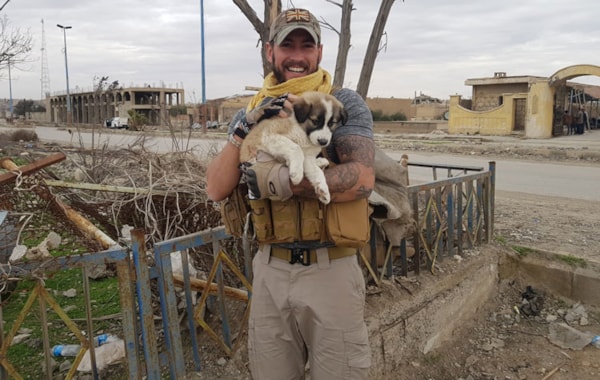 When former Royal Engineer and bomb disposal expert Sean Laidlaw heard whimpering from the rubble of a collapsed school in Syria, he found a tiny, abandoned puppy.

It was hard to work out who was the most scared — Sean, who’d been bitten by a dog as a child, or the puppy, who was surrounded by her four dead siblings.

But Sean felt a deep sadness for the puppy, whom he named Barrie, and started bringing her food and drink. Slowly, Barrie grew to trust Sean and soon the pair became inseparable.

Three months later, Sean had to return to the UK, leaving Barrie behind. But when his contract wasn’t renewed, he knew he had to bring her home, and the two were finally reunited in emotional scenes that made headlines around the world.

‘Barrie: How a rescue dog and her owner saved each other’ charts the pair’s story and Sean’s battle with PTSD, and is a heart-warming reminder of the power of this incredible canine-human bond.

Q) How hard was it for you to make that first approach to a stray in a war-torn country when you had been attacked by a dog as a young child?

“Pretty nerve-wracking. I mean, I’m stood there with a few of my Syrian team mates, a big English steely-eyed bomb disposal soldier, making ridiculous noises as I extended my hand out to Barrie. Every tiny movement she made, I jumped, but I employed the use of my Kevlar gloves and long clamps to entice her with food. In the end, I actually managed to stroke her with my hand, but it took some time and an embarrassing amount of noise.”

Q) Looking back, do you think meeting Barrie was fate?

“I’m not religious, but I do think a lot of things conspired for me to meet Barrie. I had to be a soldier, a specialist in bomb disposal; I had to know the guys I knew to get the contract; and I had to be broken enough to want to run away to a war zone to even think of taking the contract. Then I had to be that one team out of nine to pass by at that moment she was making noises. It took a lot of moving parts for me to be there, that day, at that time, and to be in that emotional headspace to yearn for something to love unconditionally.”

Q) Are you able to sum up what Barrie means to you in three words?

Q) What would be a typical day for you and Barrie now?

“She wakes me up about 5am wanting to play or barking at squirrels. If I’m working, her mum Aneta takes her for a walk and then to day-care where Barrie LOVES playing with the other dogs and especially the staff, who are her best mates. If I’m not working, she still wakes us up at 5am. We play a little in the garden, then I take her for a walk where she loves to find the wettest, muddiest puddles to roll around in. When we get home, she naps while I do some work. Later, we go for a long walk with Aneta, when Barrie will again find a puddle to roll around in and perform lots of ‘zoomies’ (her version of crazy running!).

“Back at home, Barrie has a shower, which is quite eventful now she is 25kg! Then she’ll fall asleep on us in her dressing gown, all snuggled up and warm.

“We figured out early on that she is very much an outside dog, so every night she has a choice of sleeping inside or outside. That took some getting used to on my part, as I didn’t want her sleeping outside, but that was just me being a human and not understanding Barrie is actually a dog — not my child!”