What is it like living with a deaf dog? It is often remarkable how dogs can adapt to a loss of hearing, as owners Keith and Stephanie have discovered. Plus, we share coping tips for dealing with deafness in dogs...

Above: Nutmeg with Asha.

Stephanie says: “Meg came to us when she was six months old through a Cavalier King Charles Spaniel rescue in South Humberside. She was taken to a vet at 10 weeks old and her owner told him to put her to sleep as she was poorly with a stomach bug and they wouldn’t, or couldn’t, afford to treat her. The vet persuaded the owner to sign her over to the rescue, and three months later, she came home with us. We don’t judge her previous owners; we just see it as their loss and our gain.”

Meg settled in with Keith and Stephanie at their home in Nuthall, Nottinghamshire, straight away. She was very wilful and cheeky, especially with the couple’s other dog, a Cavalier-cross named Kizzy.

The couple took her to a puppy training class at Inline Dog Training in Nottingham, and it was here that they realised how bad her hearing was.

“I’ll be forever grateful to the trainers, Marie Holt and Bev Smith, as they noticed that there was a problem with her hearing,” Stephanie says.

“We had been having problems with her recall, and they said they didn’t think she could hear us. We were in a church hall and the trainer walked slowly towards her with a squeaky toy, and Meg couldn’t hear her until she was literally about two yards away. We knew her hearing wasn’t great, but we didn’t realise how bad it was.”

After watching Meg back at home, it became more and more apparent to her worried owners just how little she could hear, so they asked for a referral to Pride Veterinary Centre in Derby where she had a brainstem auditory evoked response (BAER) test. This confirmed that she was totally deaf in her left ear and had minimal hearing in her right.

“The reason we didn’t realise straight away is because she was following Kizzy’s lead all the time — if Kizzy jumped up when the doorbell rang, then so would Meg,” Stephanie explains. “The vet said that it was just one of those things.

“Once we knew there was a problem, we started to use hand signals with her and she now understands ‘Sit’, ‘Lie down’, ‘Stand’, and so on. If she can see us, she has a recall signal as well. We train her the same way you’d train a hearing dog, only instead of a vocal command, you give a visual command.”

So far, the biggest downside to Meg being deaf, Stephanie says, is that she can’t be let off-lead sometimes as she won’t know when she is being recalled, and at agility she has to watch her owners at all times.

“We do have a walk we can take her on where we can let her off. It’s a lane that’s got hedges on either side, so she can’t wander off. But we’d never let her off in an unknown place — if she spotted a squirrel, she’d be gone!” Stephanie laughs.

She says that Meg copes absolutely fine with being deaf: “It’s like no one has told her that she has a disability, and she doesn’t know any different.”

Meg has adapted so well to these training methods that she has passed her Kennel Club Good Citizen Bronze, Silver, and Gold Awards!

After Kizzy died in 2016, Meg and her owners were heartbroken, so they introduced 17-month-old Cavalier, Asha, to the family.

“We’re training her whereby if we ask Asha: ‘Where’s Meg?’, she’ll go and find her and we hope, with time, she’ll be able to bring Meg back to us,” Stephanie explains.

“I’d have no hesitation at all in having another deaf dog — she doesn’t know she’s different, and we treat her the same as our other dog. I’m so proud of my special girl.”

Deafness is the partial or total loss of hearing in one or both ears, and can be temporary or permanent, depending on the circumstances.

Symptoms of hearing loss in dogs can include: a change in obedience levels (including inability to follow familiar commands); incessant barking; not responding to noises such as squeaking toys, other dogs barking, and doorbells; difficulty in waking; smelly discharge from the ears; and painful ears.

What are the causes of deafness in dogs? 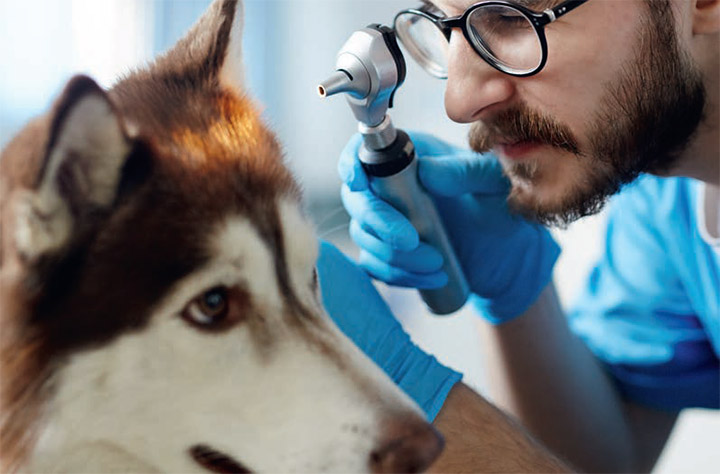 How is deafness in dogs diagnosed?

If you’re concerned that your dog’s hearing may be compromised, you must first take him to see a vet.

If your vet suspects that your dog is deaf, he or she may send him for a brainstem auditory evoked response (BAER) test, in which headphones are inserted into the dog’s ears. The device emits a sound, and your dog’s brainwave response is detected by tiny electrodes, which have been placed at specific sites on his head and shoulders. The resulting computer read-out shows the extent of his hearing loss.

What are the treatments for deafness in dogs?

If your dog’s deafness is caused by a build-up of ear wax or an infection, then this can be easily treated by your vet, who will examine and take a swab from inside the ear to determine the best course of action. The simple removal of a foreign body or build-up of ear wax should help to solve these conditions. Infections can be treated by flushing the ears and prescribing a course of antibiotics, while surgery may be required to remove growths or tumours.

Unfortunately, if the deafness is congenital or related to old age, there may be no treatment options available.

How can my dog adapt to becoming deaf?

If your dog has only recently lost his hearing, he will learn to adapt quickly to his new situation.

For his safety, a deaf dog must not be let off-lead unless it is in a safe and enclosed space, as his lack of hearing means he won’t know you are calling him back, and he will be at risk of running into danger. It’s also important to ensure your garden is fully enclosed.

Buy a tag for your dog’s collar that clearly states he is deaf, and include your contact details in case he does get lost. You could consider fitting a bell to his collar so it will be easier to find him.

Wake a deaf dog by putting food under his nose, or by gently touching him somewhere other than his face — some dogs will bite if startled when they are asleep. 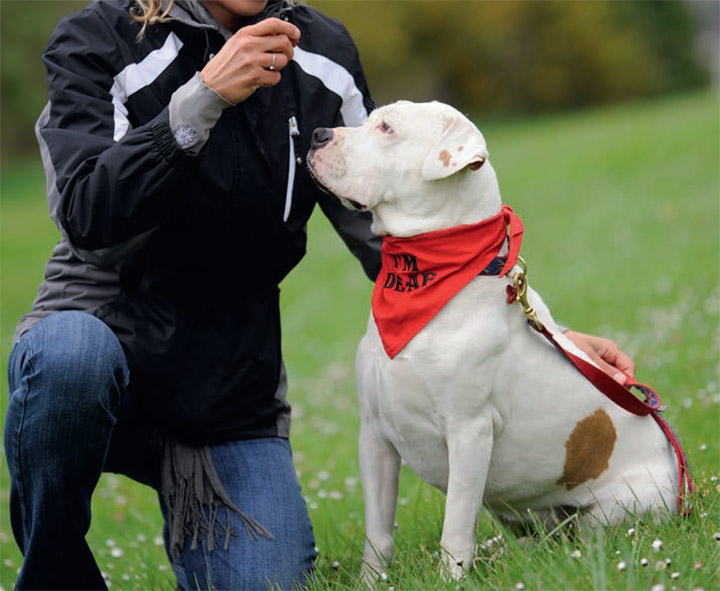 Can I train a deaf dog?

If your dog has recently become deaf, or you have adopted a deaf dog, training him can be as simple as using the spoken word, except you substitute a verbal command with a hand signal.

It is vital that you are consistent and use the same signs for each command every time.

Start by speaking to your dog as though he can hear, and begin with a pleasant command he’ll enjoy such as ‘Food time’. Get your dog’s attention using the sign for food, and then place his bowl in front of him straight away. Repeat this at each mealtime for a day or two, and then just use the sign for food. If he reacts with excitement it means he understands the command.

Next you can move on to basic training, starting with simple commands such as ‘Sit’ and ‘Stay’. Make sure you say the command as well as sign, and reward your dog whenever he correctly follows a command.

The Deaf Dog Network, founded in 2011, offers advice and support to owners of deaf dogs.

“We set up The Deaf Dog Network because there were very few rescue centres with foster carers experienced in handling deaf dogs, because people were so wary of them. Yet it’s quite easy to train a deaf dog — they will check in with you and look back to you frequently for instructions, and it’s just a case of using hand signals instead of your voice.”