Smell your way round

Dogs live in a world of scent as rich and varied as your world of sight. Everything you can see, and much that you can't, your dog can scent. So start your walk by assessing wind direction and speed, to find from where your dog is getting his airborne information, in addition to scents lying on the ground. Is the wind sweeping through the woods? It will be carrying information about wild creatures living there, so if you have a prey-driven dog, he will be much more on his toes than normal. On days like these, the difference between a happy walk and a fraught one can be as simple as walking the route in the opposite direction, so the scent blows from you to the woods instead.

Scenting is a huge part of the pleasure of a walk for the dog, and ‘checking the weemails' is as absorbing for him as catching up on the social networks is for you.

Dogs should be allowed to stop and sniff and, if necessary, add to the comments, because all this is mental stimulation for them. Watch, and the dog will tell you about each message, whether the carefully positioned scent mark over that of another dog, or the chittering teeth and drooling that means a bitch in or close to her season, has passed by. Staring hard into undergrowth indicates the presence of wildlife, and the sweeping of the dog's face sideways along the ground means you need to look lively before the whole dog follows suit and you have a ‘rolling in fox muck' incident. 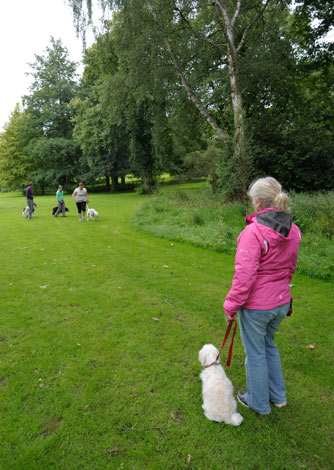 Assessing approaching dogs and owners is important. Do they look comfortably together or is the dog doing his own thing while the owner texts, phones, or listens to a headset? If the owner isn't paying attention, then it's up to you to decide whether the dog is friendly or could prove a problem, and act accordingly.

Is the dog on an extending lead? If so, he is likely to be only partially trained, or he may be recovering from injury. Though dogs on such leads should, out of courtesy, be held back on a short lead when other dogs approach, they very often are not, so keep your dog well away, on the side furthest from the approaching dog, and be especially aware that some dogs will pass and then dive round the back of yours. I once saw someone embraced by a total stranger when the dog on his extended lead went one side of her, and the owner the other, simply because neither of them was paying attention.

If someone calls their dog to heel or puts him on the lead as you approach, do the same with yours and do not allow interaction. This is a sensible approach anyway with unknown dogs, because most people are sure their dogs are friendly, while most dogs are sure that they are not. Your own dog will read the other dog accurately, so watch his body language as well as that of the approaching dog. If there is stiffening, staring, crouching, raised tails, or ear lifting, they shouldn't meet, no matter how sure the other owner is that their dog wants to play. Some breeds, such as sighthound types and primitive breeds like the Shiba Inu, are aloof with strange dogs; some such as Labradors or Flat Coats love a good bounce around together; while herding breeds favour a charge-and-drive approach that may have a nip in it. This is all very well with compatible breeds that understand each others' social customs, but it can be disastrous between different types, so include breed behaviour when you assess other dogs in order to avoid fighting or intimidation.

Terriers, while small, are feisty, and are bred to go into rather than back off from challenge; where some breeds might avoid what they read as confrontation, terriers will usually respond with "you and whose army?" and react with spirit. Some breeds, such as Boxers, have had their natural doggy features so altered that they can't express normal canine body language, and so other dogs may find their looks threatening even though the dogs themselves are not.

Many walks have natural flashpoints. To dogs, space is as important as substance, so they should never meet in gateways, going through stiles, over narrow bridges, or any other place where they are forced into close proximity. It is better to turn back or wait a few seconds than to trigger reactivity. Where people stop and gossip in a bunch, which is part of the fun of dog walking for owners, beware the dog who guards or patrols the confined space.

Blind corners, brows of hills, and other places where you can't see clearly ahead are best approached by calling your dog back behind you until you're sure that the route is safe. Letting your dog barrel ahead and out of sight isn't wise walking; being prepared for the unexpected saves a lot of red faces and keeps your dog safe. Not only will you increase your bond by reading the walk with him instead of leaving him to read it alone, you'll be setting a great example to other owners.