History has a strange habit of repeating itself, and in the case of Lesley and Simon McHugh, this has never been further from the truth when it comes to dogs.

Growing up in their respective family homes, Simon remembers his childhood black Labrador, Beauty, with affection, while Lesley has fond memories of her yellow Labrador, Butch.

Fast forward four decades and, thanks to fate and good fortune, they now own one-year-old black Labrador Luna and her yellow brother Storm, who have been the couple’s saviours over the past 12 months.

Lesley and Simon, from near Llangedwyn, Powys, have suffered a catalogue of bad luck, sad circumstances, and ill health for a good proportion of their lives.

After initially being diagnosed with pancreatic cancer in 2010 and given no hope, Simon (58) sought a second opinion and was told he had a rare neuroendocrine tumour. Following a six-hour procedure to remove half of his liver and pancreas and part of his bowel and intestines, plus further surgery to correct post-operative complications, he was given a 50:50 chance of survival.

“Although the surgery was successful, Simon’s cancer returned less than two years later and it has now spread to the rest of his liver, stomach, and jugular vein,” explained 53-year-old Lesley, who struggles with the painful condition fibromyalgia, along with arthritis in her neck, which causes almost daily migraine-like headaches.

“Thanks to a trial chemotherapy drug and monthly hormone injections, Simon’s tumours have been kept at bay for the last six years. But the treatment has taken its toll, and leaves him feeling tired, fatigued, sick, depressed, and often tearful.” Losing their 14-year-old Welsh Collie, Reg, due to a mast cell tumour in his throat in 2018, only served to make life feel even more of a challenge.

“We needed to bring fun, laughter, and life back into our home,” continued Lesley, who works part-time as a support worker for people with disabilities.

“We have always had dogs and a year without one was just horrible — the house felt so empty.”

So when Lesley came across a litter of eight-week-old Labrador puppies advertised by a well-known local breeder last February, she and Simon jumped at the chance to view them.

Faced with so many endearing puppies, the couple knew they would be in for a hard time choosing, but when a pretty black bitch wobbled over to them, they knew she was the one. Then, to confuse matters, a super-cute yellow dog puppy headed over, sat down and cocked his head. 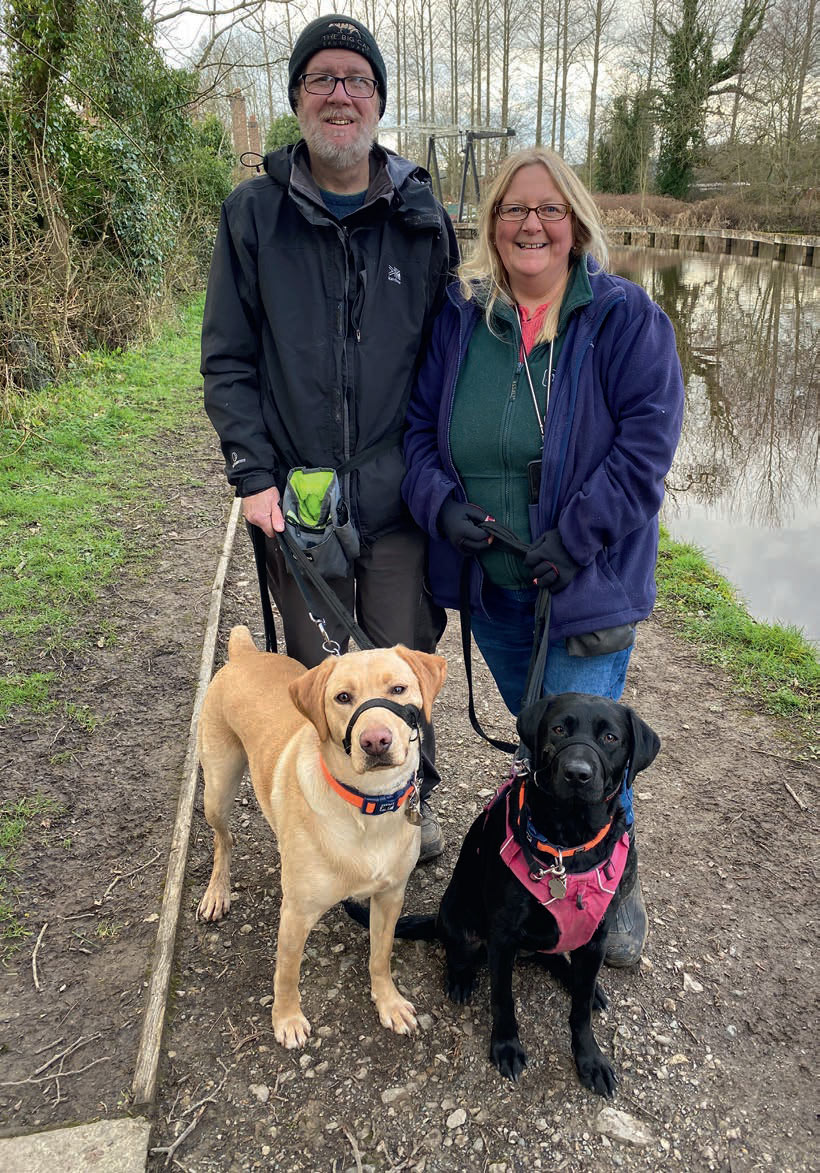 “The two little puppies picked us,” continued Lesley. “Within 24 hours we were bringing them both home — we must have been nuts having two, and it was hard work at first, but our friends and son, Aaron, helped us a lot.”

Lesley explained that the pups, who they named Luna and Storm, were very easy to house-train, and despite having totally different characters, they share an uncanny ability to detect when their owners are having a bad day.

“It’s like they just know,” said Lesley. “They’re very intuitive and well behaved for their age — quieter than you would expect for typical one-year-old Labradors. They don’t pull on their leads and try to help us out if there’s tricky terrain, such as a slope, hill, or steps. Storm knows when I’ve got a headache and manoeuvres himself behind me so I can rest my head on him.

“If they see us struggling, they will spontaneously pick up items we have dropped on the fl oor, like socks or washing. Although she can be a bossy madam, Luna is particularly good at this, while Storm is a real softy and likes sitting on our laps. Both are very loving — there’s often no room in the bed for us!”

PICKED BY THE PUPS

Lesley, who would like to train Luna and Storm as emotional assistance dogs “because that’s what they are to us”, is convinced the dogs came into their lives at the right time for a reason.

Last year was particularly tough for the couple — Simon’s stage 4 cancer worsened, while Lesley was caring for her chronically sick mum until she passed away after a six-month illness.

“Luna and Storm were a great comfort to me when my mum died,” added Lesley, who also struggles with anxiety and PTSD after losing baby Callum at four-and-a-half hours old in 1996, and another son, Dan, aged 10, on Mother’s Day 12 years ago.

“Our dogs give us a reason to get up in the morning. They help focus our minds away from Simon’s illness — before, there was just the TV.

“We are motivated to take them for walks and although we are often tired or in pain, we will pace ourselves and only go so far, before resting or taking turns with the mobility scooter. Plus, friends and people in the village help us out.”

Whether it’s cuddling up to Luna and Storm on the sofa or going for walks at local National Trust properties or on a beach, Lesley and Simon cannot imagine life without their two special dogs.

“When we are walking them, we love to look at wildlife and other animals around us,” explained Lesley. “Whether it’s stopping to listen to birdsong or a babbling brook, watching a heron on the river or a red kite circling above, feeding the swans or saying hello to a herd of Highland cattle, it’s really good for our mental well-being.

“Before, life sometimes didn’t feel worth living but having two dogs, three rescue cats, chickens, and a miniature horse means our animals need us as much as we need them.

“Luna and Storm make our house feel alive. They are a blessing and have enhanced our lives a billion per cent. We only have to look at them and they make us smile — they have got me through hell just because they’re there.”