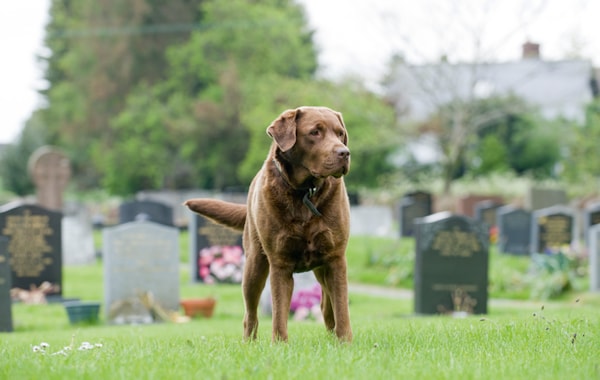 Hankies at the ready, as Karen Bush investigates the incredible faithfulness of dogs.

It’s not just wishful thinking that has made Fido — which translates as faithful — one of the traditional names for dogs over the centuries. Napoleon was said to have been moved to tears by the sight of a dog standing by his slain master’s body after a battle, licking his face and howling — just one of the myriad tales of dogs who have demonstrated unwavering loyalty to their owners even after death.

There are numerous battlefield accounts of canine courage and fidelity; the legendary mastiff of Sir Piers Legh stood guard over him when he was wounded at Agincourt in 1415, until his squire could reach him. When Sir Piers died in Paris in 1422, after being injured again in another military action, she still refused to be parted from him, accompanying his body back to England.

Dogs were pets as much as working companions during the Middle Ages, and stories about their devotion and intelligence were passed around, marvelled at, and enjoyed just as much as they are today. When the famed Duke of Berry heard of a dog who refused to leave his master’s grave, he went personally to see him, and left a sum of money to keep him fed for the rest of his days.

If that sounds familiar, it’s possibly because there are so many tales of dogs who have maintained a graveside vigil. One of the best known of all is Greyfriars Bobby, the faithful terrier who spent 14 years guarding the last resting place of his owner, night watchman John Gray. His story has been told in books and films, and the memorial erected to his memory in 1873 has the honour of being Edinburgh’s smallest listed building. A popular attraction with tourists, the nose has suffered wear and tear over the years from being rubbed for luck, and recently required a £400 restoration.

Another account tells of a widow who travelled from her home in Illinois to find the remains of her husband who had fallen at Shiloh during the American Civil War. With casualties numbered in the tens of thousands and hastily buried, no one knew where his grave was. After a day of looking for clues, she was in despair when she spotted her husband’s dog walking towards her. Sobbing, she sank to her knees, hugging him and burying her face in his fur, until he drew away and led her to an unmarked grave. She later learned that the dog had been by her husband’s side when he was shot, and had remained at his burial site for 12 days, only leaving for long enough each day to find food and water.

No name could have been more apt than that bestowed on the injured dog an Italian brick kiln worker found lying by the roadside on his way home. Carlo Soriani and his wife nursed the dog back to health, christened him Fido, and adopted him. Every day for two years he accompanied Carlo to the bus stop, watched him board the bus to go to work, and then waited for him to return in the evening, greeting him rapturously. In December 1943 disaster struck, and along with many others, Carlo was killed in a bombing raid. Fido waited as always for his beloved owner, and when he failed to arrive dejectedly went home. But the next day, and every day thereafter for the next 14 years, he returned to his post, waiting hopefully at the bus stop. Articles about his devotion appeared in newspapers, he was awarded a gold medal, and a monument was erected in his honour. When he died it made front page news, and like Greyfriars Bobby, he was buried just outside the cemetery where his beloved owner lay.

In April 1805 a young artist named Charles Gough set out to walk over Helvellyn in the Lake District, accompanied only by his dog, Foxie. They never arrived at their destination, and it wasn’t until three months later, when a shepherd was alerted by a dog barking, that anyone knew what had become of them. Gough appeared to have fallen and died of head injuries, but incredibly Foxie was not only still alive but had produced a pup. The loyal dog, who refused to leave her owner, went on to become a legend; the story made Wordsworth cry and inspired him to write the poem ‘Fidelity’, a part of which is reproduced on the Gough memorial erected on the mountain in 1890.

Sir Walter Scott also wrote a poem ‘Helvellyn’, and, in later years, artists Francis Danby and Sir Edwin Landseer paid their own tribute to Foxie’s loyalty by immortalising her in their works ‘The Precipice’ and ‘Attachment’.

Fido is not the only dog to have become famous for waiting for his owner to return — many other examples have captured the hearts of the public. Celebrated around the world in books, films, and statues, the tale of Hachiko the Akita is well known. For over nine years he waited at Shibuya Station in Japan for the return of his owner, Eizaburo Ueno, who had died while at work. When Hachiko died at the age of 11, he was finally reunited with Eizaburo, when his ashes were interred next to him. Such was the power of his story that 59 years after his death, millions of radio listeners tuned in to listen, spellbound, to a recording that modern technology had been able to retrieve of him barking.

For some dogs, the grief of being parted from a beloved owner is too much to bear. When Captain John McNeill Boyd was lost in February 1861 while attempting to rescue drowning seamen at Dun Laoghaire, near Dublin, during one of the worst gales of the century, his devoted dog was inconsolable. The loyal Newfoundland was with the rescue crew when Boyd’s body was recovered, he walked beside the coffin during the funeral procession, and when the captain was interred, lay down beside the grave and refused to leave, eventually dying of starvation. But that isn’t the end of the story; shortly afterwards a memorial statue was erected to Boyd in St Patrick’s Cathedral in Dublin. The ghost of a black Newfoundland dog has been seen many times sitting at its base, as well as continuing to keep a vigil at the nearby cemetery. Sometimes, it would seem, canine fidelity transcends even death.