Kate Wright tells Joanne Bednall why adopting an abandoned and malnourished disabled dog was one of the best decisions of her life.

With her dirty, matted coat, infected ears, twisted spine, and deformed front legs, little Emerald didn’t look much like a dog at first. But to 42-year-old Kate Wright, she was beautiful — inside and out. It was late February 2018 and the Maltese-cross had been found dumped in a carrier bag outside a pub.

“The moment I first saw her, she just melted my heart,” said Kate, who at the time was working as an animal collection officer for the RSPCA. After 18 years of dealing with a vast array of abused and neglected animals in often harrowing circumstances, Kate, from Dunstable, Bedfordshire, felt there was something extra-special about this case.

“A colleague had picked her up and taken her to a local vet’s,” she explained.

“I collected her the following day to take her to my own vet for further investigation. But the moment I saw her, I knew she wasn’t going anywhere else.”

Weighing less than 2kg, ‘Emmie’ was clearly in a bad way. Aside from obvious malnutrition, the tiny dog’s coat was thickly matted and she was suffering from painful ear infections. But of even greater concern was Emmie’s physical state. Both her front legs bent inwards, and she was unable to use the left one at all, other than for balance. Her spine was twisted in an ‘S’ shape, which Kate says reminded her of a child with scoliosis.

“Vets estimated her to be about four or five months old, but at first they weren’t sure what had caused her problems,” continued Kate, who’s devoted much of her life to hand-rearing and caring for an assortment of animals and wildlife, as well as running a guinea pig rescue, Guinea Pig Rescue and Rehome.

“Emmie had no obvious physical injuries so the eventual conclusion was deformity. Despite there being so much wrong with her, she was the happiest, friendliest little thing; I knew she would be with me forever.” 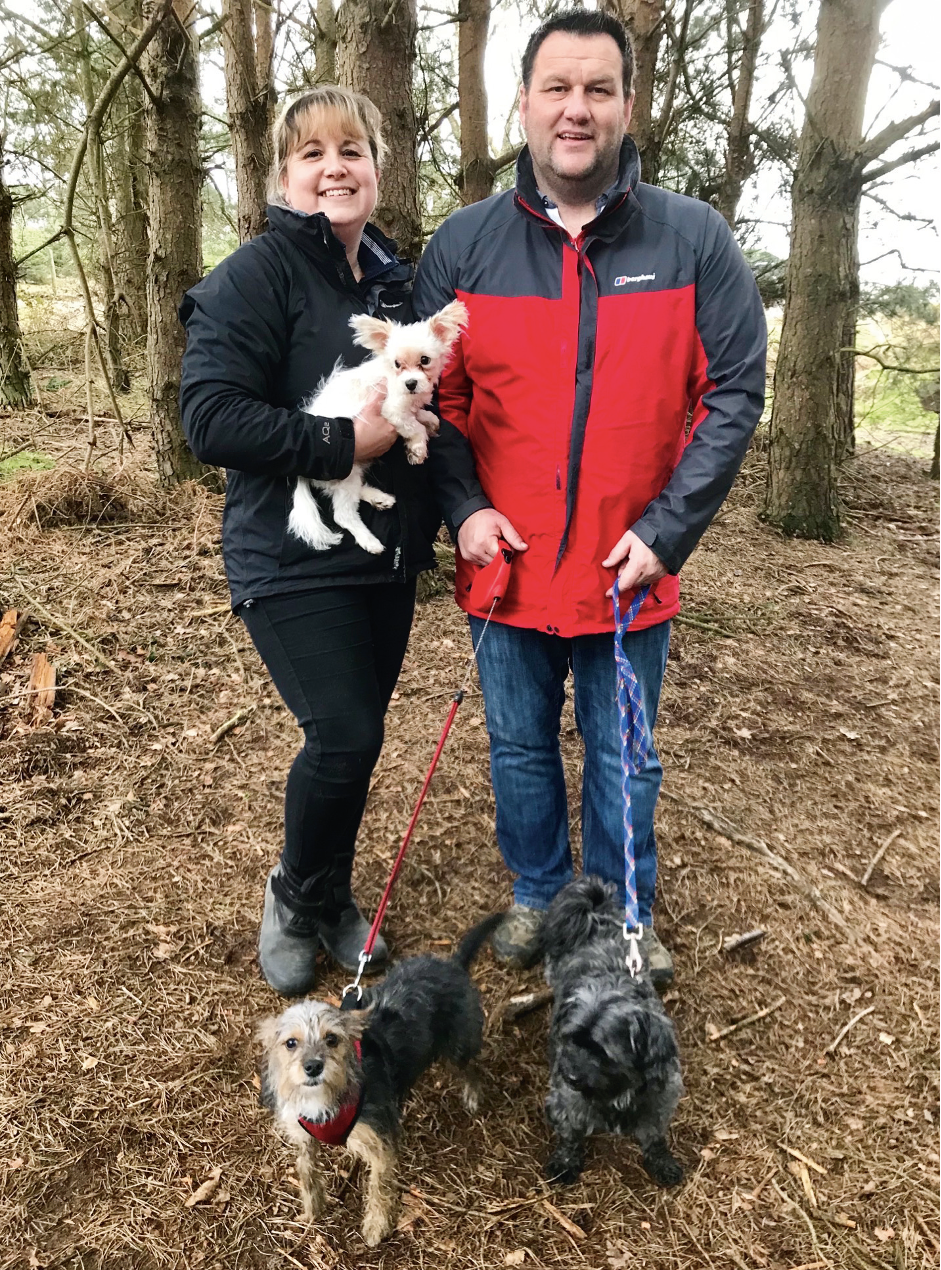 Although Kate had been searching for a canine companion for her 12-year-old Lhasa Apso X Shih Tzu, Sapphire, Emmie wasn’t the perfect match on paper.

“I wanted a dog who was small, female, friendly, good with little furry animals, and not a puppy,” said Kate, who was already committed to rehoming Ruby, a terrified six-month-old Yorkshire Terrier X Jack Russell, who’d been living with a heroin addict and was due to arrive the following day. However, despite having reservations about rehoming two rescues with entirely different needs at the same time, Kate says all three dogs ended up benefiting from each other.

“They got on really well from the outset,” continued Kate, whose life was turned upside down when she was made redundant from her role at the RSPCA in September 2020.

“Although Emmie is the smallest, she’s the boss — she’s very vocal and playful and had a strong character right from the start.”

At first, Kate focused on giving Emmie “lots of food and love” to build her strength and confidence. She treated her ears and clipped her matted coat little and often, so as not to traumatise her further. The tiny cross-breed was X-rayed six to eight weeks later after she’d put on some weight and was feeling better. But Kate says the results were shocking. “It turned out her ‘good’ front leg wasn’t good at all,” said Kate, who secured the position of patient care assistant at Hertfordshire-based small animal referral practice Davies Veterinary Services (Davies), soon after leaving the RSPCA.

“Although the vets think Emmie was born like it, they don’t understand how she can be OK and manage so well. But the truth is she doesn’t know any different.” Kate, who now works as a diagnostic technician at Davies, describes Emmie’s movement as a series of bunny hops on her back legs. Yet despite her disabilities, the little dog’s enthusiasm remains undimmed and she’s determined to accompany Saffy and Ruby on walks.

“I do have to carry her for much of the way, though,” said Kate, “and a lot of the time is spent picking her up and putting her down again — but she stops and looks at me if she’s had enough.” Now aged four, Emmie also has to be carried up and down stairs and is unable to get on and off the sofa by herself, so Kate has hit on a novel way to help her.

Using foam bought from Ikea and covering it in soft fabric, Kate has created three steps so Emmie can scale the sofa at her leisure. Kate believes the key to Emmie defying her disabilities and doing so well is treating her like a normal dog and not an invalid.

“She loves the beach and coming with us on doggy holidays on a canal boat, but I obviously have to be very careful she doesn’t fall in the water because she wouldn’t be able to swim.”

It seems Emmie attracts interest and fans wherever she goes. “She’s a real crowd-puller,” laughed Kate, who admits that when she comes across an animal no one wants, it makes her want them more. “People think Emmie is a cute puppy initially and ask if she’s OK when they see her limping. They’re sad to hear her story, and some even suggest that perhaps I should take her to the ‘Supervet’ to make her better.

“Other dogs don’t know what to make of her either, and seem unsure whether she is a dog or a rabbit at first! “I think Emmie is a 100 per cent good advert for disabled dogs and rescues — I’ve always recommended people go down the rehoming route first. My mum jokes that all the sick and needy animals seem to single me out somehow. All my three are wonderful rescues, but it’s Emmie who’s the first to greet me in the mornings. She’s always super-excited to see me and is the happiest little dog ever, despite her deformities and poor start in life. Emmie is an absolute joy and brings my husband and me so much pleasure. I feel so lucky to have her.”