The dogs of Chernobyl The Chernobyl disaster has been the topic of conversation by many over the last few weeks with the release of historical drama series 'Chernobyl' on Sky Atlantic and HBO. But what happened to all the dogs that were left behind?

The explosion of reactor four at the Chernobyl Nuclear Power Plant in Pripyat, Ukraine, on April 26, 1986, is regarded as the worst nuclear catastrophe in history, and made headlines all over the world. Over 120,000 people from 189 towns and villages within 30 kilometres (19 miles) of the power plant — known as the Exclusion Zone — had to evacuate, leaving all their worldly possessions behind, including their pets.

Once the extent of the devastation became apparent, owners were forbidden from re-entering the area to recover their animals, who were now contaminated with radiation and left to fend for themselves. The dogs retreated to the surrounding woods, but packs of wolves and food scarcity forced them back to the abandoned city and towards the still active nuclear plant.

Dogs were left behind

It’s not clear how the animals were affected by the radiation or how they survived the initial fallout, although it is thought that some did suffer side effects, such as damage to their nervous systems. Fearing the spread of rabies from the stray dogs, the government sent soldiers into the Exclusion Zone to eradicate the problem. Many dogs, however, managed to stay hidden, and went on to survive the harsh winter conditions that followed, with little in the way of shelter or food.

Today, it’s estimated that over 250 stray dogs, descendants of those abandoned pets, live around the nuclear power plant in the ghost town of Pripyat, with another 225 in the city of Chernobyl itself 20 kilometres (12 miles) away. Hundreds more inhabit the various security checkpoints throughout the Exclusion Zone, an area which stretches to around 2,600 square kilometres (1,000 square miles).

Severe malnutrition is just one of the problems these dogs face. Due to the many wild animals that live within the Exclusion Zone, including wolves, deer, bears, and boars, these strays are often exposed to and infected with rabies.

More than 3,500 people now work within the Exclusion Zone — primarily construction workers who at the power plant — and around 200 people live there permanently (former residents who refused to leave following the disaster).

They have in a way adopted these stray dogs as their own, feeding them scraps of food and caring for them when they are ill or injured, despite the risks to their own health. 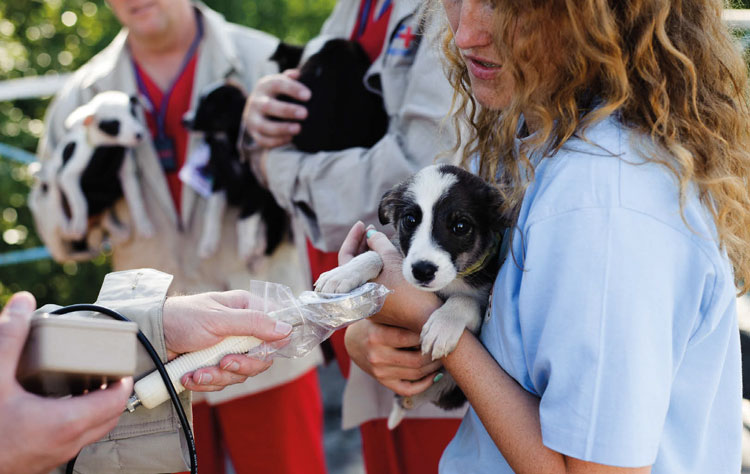 Reducing the spread of rabies

A lack of funds for an alternative solution forced the nuclear power plant to hire a worker to cull the dogs, but thankfully another option has become available. With the help of international animal welfare organisation FOUR PAWS and eight other partners, US charity Clean Futures Fund (CFF) has stepped in and implemented a five-year plan, named Dogs of Chernobyl, to help the animals within the Exclusion Zone.

The project aims to catch, neuter, and medically treat up to 500 stray dogs over the next five years. This includes vaccination against rabies, in an attempt to protect both the animals, and the workers who can’t help but care for them.

Lucas Hixson, co-founder of CFF, explains: “The priority is to vaccinate these dogs against rabies, as well as parvovirus and hepatitis. We’re also treating them for worms and mange, which are big issues in the area.”

Julie Sanders, international director of the companion animals department at FOUR PAWS, says: “By vaccinating the stray dogs, we are also protecting the 3,500 nuclear power plant workers who come into contact with the dogs. By neutering the strays, we will also achieve a long-term reduction in their population, improving their welfare. This is important because their chances of survival are greatly reduced if their numbers increase, due to lack of food and shelter in the extremely cold winters.”

Lucas adds: “These animals are very deprived and aren’t receiving any treatment, especially for mange. We’ve seen a few litters where the puppies are hairless; it’s so sad. The locals are rather limited in what they can do, as there is a lot of poverty in Ukraine, but they do what they can. Our mission is to support them and these animals.”

CFF also plans to microchip the dogs, so they can be monitored in the future. FOUR PAWS has sent a vet to join the Chernobyl team, and has provided medicines and equipment to help the project.

Plans for the future

But how is the team being protected from radiation in the atmosphere? Many workers can only stay in the Exclusion Zone for up to 15 days at a time, and visitors and tourists to the area are only allowed in for a certain amount of time. Before the start of the project, extensive research was carried out to minimise the health risks from the environment.

Lucas explains: “We are following strict health and safety protocols to ensure the safety of our team. As part of this, it is mandatory to wear appropriate clothing to ensure the team is protected from the radiation levels.”

On top of this, the stray dogs will be thoroughly washed and scrubbed before every medical treatment to reduce the risk of contamination.

“There is also no risk presented by surgery and open wounds. The radioactive contamination of the dogs is very low, so it poses no risk to humans,” adds Lucas.

In June 2018, CFF sent a team to Ukraine for four weeks, focusing on caring for the dogs in the power plant, the Exclusion Zone, and the city of Slavutych, which was purposely built for Pripyat evacuees after the 1986 disaster.

“It’s so important to improve the quality of life for these animals,” says Lucas. “With the microchips, we can follow the dogs’ progress and how they are faring when we return.” 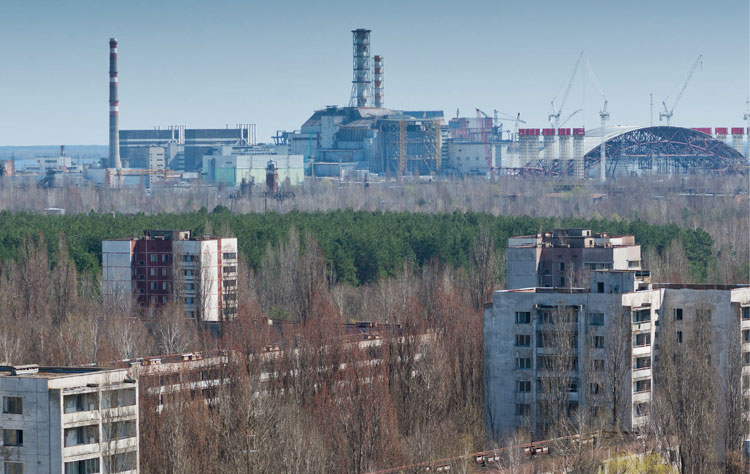 About the Chernobyl disaster

In the early hours of April 26, 1986, reactor four at the Chernobyl Nuclear Power Plant exploded during a safety test, spewing more than 400 times the amount of radiation produced by the bomb dropped on Hiroshima.

The disaster killed two people and hospitalised 134 more, including firefighters and employees who went back into the plant to help. Twenty eight later died as a result of acute radiation.

A concrete sarcophagus was erected over the reactor to contain the worst of the radiation, and the Exclusion Zone was put in place. A new city, Slavutych, was built 45 kilometres (28 miles) away to house the thousands of Pripyat evacuees.

The abandoned town of Pripyat is now something of a tourist attraction, with sanctioned tours offered under strict observation and guidance from licensed tour operators. A New Safe Confinement structure was erected to contain the now unstable sarcophagus and the surrounding area. This work was expected to be completed in late 2017. It’s estimated that the Exclusion Zone will be contaminated by radiation for thousands of years to come.

According to CFF, over 90 per cent of Chernobyl’s dogs are aged three to five years or younger, with very few living beyond eight years.