My dog saved mine and my son's life

"As if this wasn't enough, my wonderful dog has changed my life completely - all for the better.

"Nine years ago, life was rosy. I worked as a PA and enjoyed keeping fi t by going to the gym and kick-boxing. Then, on November 5, 2001, everything changed when I fell down a pothole. Although I'd dislocated my knee, a strange pain persisted in my chest which doctors at fi rst thought might be a pulmonary embolism. Following CT and MRI scans, shadows were spotted on my lung, but it wasn't until 2004 that a biopsy revealed I had chicken pox calcification, granulomas, and small non-cancerous tumours covering 90 per cent of my lungs. Experts had never seen it before. Because doctors in the UK and Europe don't know what's caused my condition, they can't treat it and the only way to dull the pain is by taking strong painkillers. It would cost £20,000 to travel to America and speak to the world's leading consultants.

"By 2006, I was living on my own and spending all day, every day, in bed trying to get away from the pain. I got more and more depressed and my only relief was spending one day a week shopping with my mum and dad - but it took me the following three days to recover. 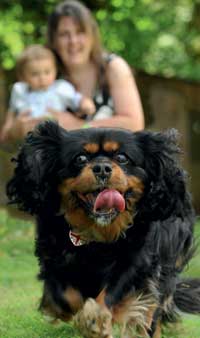 "It was around this time that Dad suggested I should think about getting a dog as an incentive to get me up and about. I'd grown up with a lovely yellow Labrador called Barney, who still lived with my parents, and I loved dogs but was worried about whether I'd be able to cope.

"I knew I wanted a small dog who wouldn't need a great deal of exercise and would be good with children, and could play with my niece and nephew. I checked out the local Dogs Trust centres. Ideally, I wanted a rescue, but there weren't any suitable dogs, so I meticulously researched breed after breed and decided on a Cavalier King Charles Spaniel.

"Before I knew it I was in Sheffield checking out a litter of black and tan puppies advertised in the local paper. There were just two 12-week-old puppies left - a dog and a bitch - but the dog seemed a little too lively. The bitch, however, just came and sat next to me quietly. ‘That's never happened before,' the breeder told me, ‘she's normally as loopy as her brother!' But it was too late - I'd fallen in love with Millie and soon she was sitting on my lap in the car, fast asleep on the journey home. She was so easy to train, really affectionate, and never pulled on the lead when I took her out on my crutches, although she pulled when anyone else took her for a walk.

"Millie seemed to instinctively know if I was in pain and wasn't able to play with her, so she'd be content just to snuggle up close to me.

"Because I constantly felt guilty about whether I was giving Millie enough exercise, I took more painkillers and soon found it easier to get out. I started talking to people on walks and I grew in confidence. She went everywhere with me - even to the supermarket, where she fitted snugly into a pet bag in the front of the trolley!

"While I had lost a lot of friends, Millie - along with my immediate family - provided me with consistency and unconditional love. She didn't judge me and lifted my spirits no end.

"She gave me the confidence to go out with Mum to bingo every Tuesday. It was there that I first noticed Darren. We hit it off instantly and before I knew it, I was falling head over heels for him and he proposed after two weeks! Two months later, Darren had moved in and he gave up his job to become my full-time carer - thankfully, Millie just accepted him as part of the family. 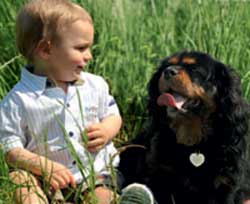 "On November 8, 2008, after doctors had warned I'd never be able to conceive due to having endometriosis as a teenager, I gave birth to James. I'd never been happier, but four weeks later I was devastated when Dad died suddenly. Then in August last year, I noticed that Millie's eyes had become cloudy. The vet explained that she'd got ulcers and gave her some medication, which cleared them up by November. But in March this year the problem returned and she was diagnosed with a deep eye infection, which necessitates expensive weekly trips to the vet's for drops, ointments, antibiotics, and painkillers. The worst case scenario is that Millie could lose both eyes, Millie has had a massive impact on the whole family. but for the moment at least she is stable.

"I'd do anything for her - we owe her everything. Any dog who loves his owner would do what she's done for me, but she's gone way beyond that. Millie's actions meant James didn't become another cot death statistic. If it wasn't for this loving little dog, I would never have met my life partner, got engaged, and had James - I'd still be stuck in my bungalow in bed all day.

"I'm slowly reducing my painkillers and don't even need my crutches any more. Walking Millie is pleasurable physio, not a chore. I'm so proud of her that I nominated her for this year's Dogs Trust Honours - although we didn't win, she will always be a winner in my eyes.

"My mum, Darren, James, Millie, and I are now looking forward to a new life on the south coast where we have found a house not far from the sea. I'm hoping that the clear air will benefit my condition, while Millie will be beside herself with the beach walks. It's the very least she deserves."