At last, the benefits of owning and walking a dog are being recognised, says Stephen Jenkinson. Nothing beats a good dog walk for both mental and physical well-being.

Dog owners have lots to be cheerful about as the COVID-19 access restrictions are increasingly lifted across town, coast, and country.

The last time dog walking was so severely curtailed, due to foot and mouth disease (FMD) in 2001, attempts were made in some areas to make the temporary restrictions permanent — not so today.

While there’s no room for complacency, we can rightly celebrate the progress that’s been made in the last 20 years to recognise and promote the many ways dog walking improves physical and mental well-being for ourselves and our canine companions.

Back in 2001 things looked very different. While new laws had just been passed in England and Wales to better protect inland access to the outdoors, some land managers tried to permanently reduce where dog walkers could go and what they could do, by retaining what were originally stated to be only temporary restrictions to stop the spread of FMD.

A now legendary flashpoint was the New Forest in Hampshire, where returning dog walkers were greeted with new official demands to keep even the most well-trained of dogs on short leads. People felt betrayed. For months they’d reluctantly reduced where they walked their dogs for the greater good, only to find their public-spiritedness in respecting the FMD restrictions was exploited to impose permanent restrictions.

While some officials claimed the new laws to enhance public access required these additional on-lead restrictions and dog bans, Defra guidance made it explicitly clear that the legislation didn’t reduce long-standing access rights and traditions.

The New Forest Dog Owners Group (NFDOG) was formed to give dog walkers a more powerful and coordinated voice. It wasn’t a happy time.

Fast-forward nearly 20 years, and the 1,300 members of NFDOG are now part-funding a countryside ranger, erecting responsible dog walking posters, and distributing information cards to prevent ill-informed or irresponsible dog walkers getting everyone a bad name. Its mantra of ‘on the forest, off the lead but under control’ makes it very clear the ethos is one of promoting rights and responsibilities, and not a doggy free-for-all.

So, what’s changed? It’s very much a tale of carrots and sticks. The ‘carrots’ come from nearly two decades of research across the UK and internationally, which shows the benefits to individuals and society as a whole from dog walking and pet ownership (see ‘Dog walking — what we know now’). Such evidence has greatly supported those decision-makers who always knew dog walking was about benefits for the many, and not just problems caused by a few.

Even for those in power who don’t like dogs, updated Government-endorsed research made a compelling case for protecting dog walking as it reduced the burden on the NHS, supported rural communities through dog-friendly tourism, and aided the early reporting of rural crime, anti-social behaviour, and fires. It’s no surprise that a spike in anti-social behaviour and heathland fi res occurred in Dorset when dog walking was curtailed during the COVID-19 restrictions.

As for the ‘sticks’, the ability of social media to help dog owners make contact, co-operate, and campaign against excessive and ill-thought-out local restrictions has been a major factor. Protest marches, persuasive public relations, and lobbying of decision-makers all made a difference, as was the case in the New Forest and more recently on the Fylde coast in Lancashire.

So, there truly are reasons to be cheerful, but there’s no room for complacency.

There’s still plenty of local councillors and land managers who, through lack of knowledge or just plain prejudice, wrongly believe the best or only way to manage dog walking is to ban or restrict it, with little thought as to the wider consequences.

But as NFDOG and all responsible dog owners have shown, as we put COVID-19 restrictions behind us, there’s no better time to promote and protect the benefits of happy, healthy, hassle-free dog walks alongside all other interests such as wildlife, farming, and those visitors without dogs.

COVID-19 has, without doubt, been a tragic yet powerful reminder of how dog walking and access to the outdoors for all is essential for our health and well-being, whether you’ve two legs or four. That’s something to treasure every day, but never take for granted.

Dog owners who love coast walks and beach swims are also benefiting from this more enlightened thinking, because Government-funded Natural England will soon have protected and enhanced access along England’s 3,000 miles of coastline. Unlike the enhancement of inland access rights immediately after FMD, when dog walkers were told to keep their pets on a short lead everywhere from March 1 to July 31, and banned from 25 per cent of the new access land entirely, canine restrictions on the England Coast Path are only being imposed on a case-by-case basis where truly needed and for the minimum time possible.

Restrictions on dogs are in truth restrictions on people — people who vote. And with a dog in a quarter of all homes across the UK, that’s a lot of dog-friendly voters.

EU wildlife laws have greatly helped too, demanding extensive dog-friendly greenspaces, including canine activity trails and doggy drinking fountains, be provided if local councils allow new houses to be built near sensitive sites for protected plants, birds, and mammals. These days it’s neither acceptable nor effective to just ban dog walkers from such areas or impose year-round, on-lead rules on everyone.

Award-winning schemes such as the housing developer-funded and council-run Dorset Dogs project are a shining example of how making places for people and wildlife really can work.

DOG WALKING — WHAT WE KNOW NOW

Find out more about the New Forest Dog Owners Group by visiting www.newforestdog.org.uk 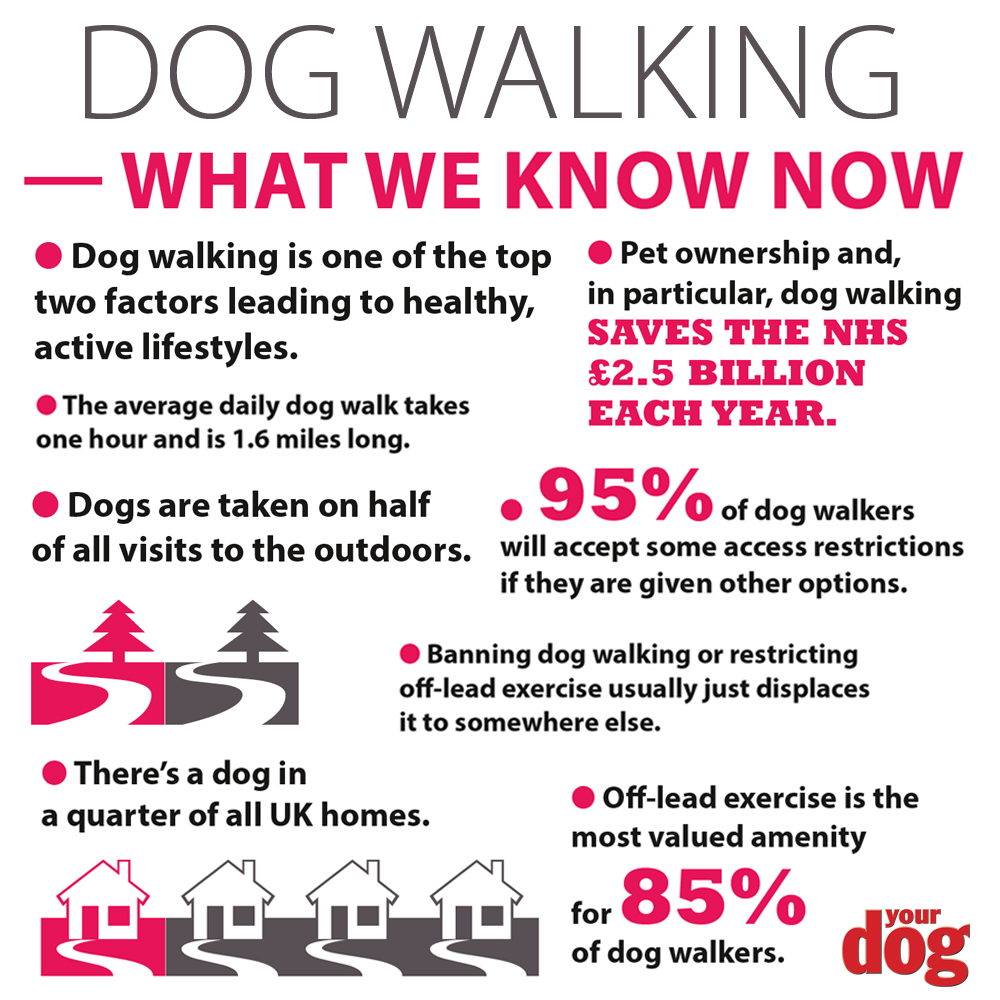