Jenny Lane knew that it was out of character for her 11-year-old Yorkshire Terrier Oscar to be unenthusiastic about his daily walk, but she put it down to his advancing years and the summer heat. It wasn't until he started sitting down on walks two weeks later and going off his food that Jenny became concerned. "At first, I thought Oscar was starting to feel a bit stiff, but when he refused to eat his favourite meals of tuna and rice and chicken and rice, I became worried," said Jenny, from Woburn, Bedfordshire.

So she took Oscar to her local vet, who thought that the terrier might have a gut problem and prescribed some tablets. But two days later, Oscar was lying still and refusing to get up. "He just wanted to sleep all the time so I took him straight to an emergency vet," said Jenny. "They thought that there might be a problem with one of the discs in Oscar's back so they kept him in over the weekend so that he could be sedated and X-rayed. That was the longest weekend I've ever endured." By Monday, the X-rays had come back clear and, with no other obvious explanation for Oscar's condition, he was immediately referred to Davies Veterinary Specialists (DVS), one of the largest and most diverse private small animal referral practices in Europe.

"On the way to the car, Oscar kept falling over and was crying but I hoped against hope that this was because he had been sedated," continued Jenny, who by now suspected that her dog was seriously ill. On arrival at the veterinary hospital, luckily just a stone's throw from Jenny's home, they were met by the reception staff and neurologist Cristian Falzone. After being ushered into a consultation room, Oscar's lead was unclipped and almost immediately he walked into a wall. Jenny was stunned when Cristian, who'd been studying Oscar's every move, told her: "This dog is blind but I think I know what might be wrong with him."

Cris explained that there was a good chance that Oscar was suffering from a very rare condition called eosinophillic meningoencephalitis, which causes brain inflammation and swelling. But waiting for confirmation of the condition would take up precious time so Cris started treatment immediately. Oscar was given a high dose of steroids intravenously in the hope that this would reduce the inflammation in his brain.

"An MRI scan and spinal tap confirmed the condition but Cris told me that he wouldn't know for 24 hours if Oscar's sight would return partially, fully, or not at all," said Jenny. "It hadn't crossed my mind that Oscar had gone blind, but Cris assured me that he wasn't in any pain and had been crying because he was distressed at not being able to see. At this stage, there was still a good chance that Oscar wouldn't survive as most dogs with the condition die - Cris said that eosinophillic meningoencephalitis is known as the ‘silent killer' because it can have no symptoms, advance quickly, and kill instantly. Another hour or two and Oscar would have died."

The shock and stress of this news took its toll on Jenny. When Oscar was taken away for treatment, she was convinced that she wouldn't see him again."I thought that I was going to lose Oscar and for the first time in my life, I had a panic attack," she said. "I couldn't get my breath and my chest went tight - at first I thought I was having a heart attack."

But, poised to call an ambulance if necessary, the veterinary nursing team sprang into action and instructed Jenny to breathe into a paper bag until her breathing levels returned to normal.The vets' prompt action, combined with Oscar's positive response to steroidal treatment, not only saved the Yorkie's life but also returned his vision to normal."In just three months, the inflammation reduced from the size of half a tennis ball to a 10p piece," said Jenny. "The vets can't believe how well he's recovered."

Despite the steroid dosage being gradually reduced over the next six months, Oscar started drinking "unbelievable amounts" of water and was diagnosed with diabetes - a common side effect of the drug.He now has an insulin injection morning and night, although recent tests have shown that his glucose levels appear to be returning to normal. The steroids have since been replaced with a chemotherapy-based drug, which is given every five weeks and has been shown to keep canine patients stable.

"Oscar will always have the condition, it's just a question of managing it, and he'll be on drugs for the rest of his life," said Jenny. "He'll have another MRI scan in November to check on the size of the inflammation." And, as if Oscar hadn't been through enough, he's now on a strict diet to counteract the main side effect of steroids - weight gain - and is receiving lots of attention to help ward off depression, a typical reaction to the drug he's currently on.

Although the terrier should ideally tip the scales at 7.5kg, he ballooned to 10kg, but thanks to Jenny feeding him three small daily meals of Royal Canin Obesity Management dried dog food with half a teaspoon of low-calorie cottage cheese, he now weighs 8.4kg. "Dogs taking this drug can get depressed, and I've noticed that if I leave Oscar on his own for more than three hours, it takes half an hour for him to cheer up," added Jenny. "It requires lots of love and commitment to care for Oscar but I wouldn't have it any other way. He's endured such a lot and is extremely lucky to have regained his sight. It was such a dreadful experience for us both and I can't believe how well he is now. I thank God every day that he's healthy and happy and enjoying life. Words can't express how grateful I am to the staff at DVS for saving my dog." 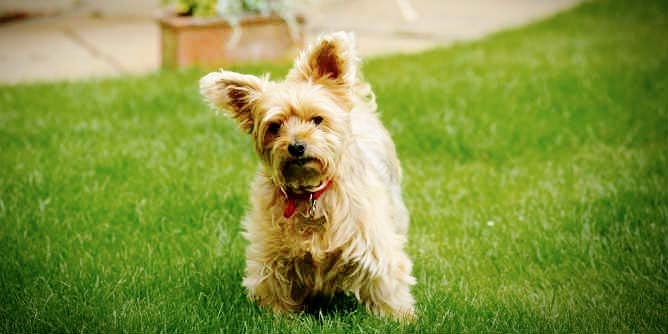