"I don't think the focus on whether you work is important," she explained. "It's how much you're prepared to make compromises in your life, just like adjusting a lifestyle to have children.

"The problem is when you have an owner who doesn't understand that they have to make some allowances, or if they're not prepared to.

"It also depends on your lifestyle; if you want to go out and socialise then don't have a dog. Most people who have dogs will know that it's a dedicated, life-long commitment.

"I think it's wrong to condemn everybody who works and has a dog; it's not reasonable or fair. In some cases their dogs get more attention than if the owners are at home all day."

Elizabeth advised people not to let the fact that they work necessarily rule out owning a dog.

"Circumstances change and not every job is inappropriate for having a dog," she said. "People who work often make the best dog owners because they're the people who really want a dog."

According to Oxfordshire-based trainer Tony Orchard, most of the people who attend his classes are working owners.

He believes it's possible to work and own a dog; it's just a case of being a responsible owner.

"A dog shouldn't be left alone to become bored, but hundreds of thousands of people work and have dogs and those dogs have really happy, unstressed lives," Tony explained. "I wouldn't want a dog to be left from morning until evening with someone just popping in for 10 minutes at lunchtime, but then that might be what an older dog needs."

Tony said aspects such as how long you work for, whether you could work from home, or take your dog to work sometimes were important factors. He stressed the importance of choosing a breed suitable to your lifestyle, as well as employing a dog walker or asking a friend or neighbour to pop round to let your dog out.

"Lots of people work but still get time to attend my classes," he said. "It means their lifestyle is suited to a dog.

"It's all about being a responsible dog owner. If you work you will devise a strategy so that your dog has a good life, and you benefit from having a dog in your life."

Fellow trainer Stella Bagshaw explained it was a matter of a dog getting into a routine, but said she didn't advocate long days where pets were home alone.

"There are so many types of work these days - people work part-time, full-time, and from home," she said. "Even if you work full-time it all depends on a dog's age, breed, and personality. Many dogs live happy, fulfilled lives with people who work full-time because the time they spend with their dogs is good quality."

Full-time workers should think seriously about the impact and implications of a dog being left home alone, advised Devon-based trainer Kirsty Peake. "If you work full-time and want to have a dog you need to have an enormous amount of back-up, such as a dog walker coming in while you're at work," she explained.

"The maximum amount of time a dog should be left alone is four hours and that's pushing it. Dogs have got to have lots of activity toys and lots of stimulation.

"Some breeds need lots of mental stimulation, such as the Border Collie - that's not a breed people who work full-time should have. Look at the type of dog you want and look at the lines of the breed. I've got several clients who work shifts and that works really well for the dog. Part-time can also work. The big problem is when people work 9 – 5."

Give a dog a home?

Many people assume animal charities are reluctant to let people who work rehome a dog. But is this really the case?

Wood Green Animal Shelters has a strict rehoming policy to ensure all dogs are placed in suitable environments and are given the best quality of life possible.

But Sue Ketland, behaviour and training consultant at Wood Green, said the charity would consider both full and part-time workers, depending on various factors including the support network available and their working hours.

"We have a small percentage of dogs at any one time who are eligible to be left all day, but a big percentage of people who visit us work, which means they're not always successful when they come here," explained Sue. "All our policies were revamped within the last decade - we started out much stricter. If someone's desperate for a dog then contact some golden oldie groups and go for a dog in his twilight years who's happy to sleep for many hours a day."

For puppies, the charity looks for rehomers who would leave them up to four hours and no longer. Likewise, them charity Dogs Trust is very reluctant to rehome puppies to full-time workers. Shauna Stedman, supporter relations officer at the charity's Evesham site, said the centre considers people who work but insists that full-time employees provide a break in their dog's day where somebody will let him out or take him for a walk.

"It's not a black and white subject," she said. "Our policy depends on the person and the dog. There are ways that people can own a dog and work as well. There are certain breeds and certain dogs who come in and can be left for longer. We match a person to the dog."

Sieglinde Schuster, senior rehomer at Battersea Dogs & Cats Home, explained that the charity feels its dogs would be happier in homes where they're not left alone all day, and won't rehome dogs to people who are out of the house for a full working day.

However, it does place dogs with owners who can provide what it calls a ‘working day with a break', where someone takes the dog for a walk to break up the day. These are normally older dogs who don't require as much physical and mental stimulation as youngsters.

Smaller charities often have varied views when it comes to rehoming policies. Three Counties Dog Rescue imposes strict policies, according to Gyll Mauchline who runs the Lincolnshire-based charity, to prevent a vicious circle of animals being sent back to them. If someone works longer hours the charity suggests they get an older dog. "We go into each case in great depth to try to get it right," said Gyll.

Requirements the charity takes into consideration include the hours people work and whether they come home at lunchtime.

However Ros Norman, who runs Animal Helpline in Wansford, Cambridgeshire, said she thinks dogs are better off in homes than left in the rescue centre. She looks for owners who are committed, responsible, willing to get up early to exercise their pet before work, and provide a good amount of exercise when they get home.

"We don't have any blanket rules," explained Ros. "If people are prepared to give a dog a good home we're happy to let people who work rehome. Working people can make arrangements; they can get a dog walker or relative to come in during the day."

Sue Gibbins, from Banbury, Oxfordshire, successfully juggles working four days a week with looking after her two-year-old Cocker Spaniel, Mizzy. "When she was a puppy she used to come to work with me," said Sue. "I had my own office and my company was very flexible. Now she's older she's OK to be left on her own. Someone goes home at lunchtime and sometimes my husband is home in the afternoon. If no one can get home at lunch she'll come to work with me."

Sue gets up at 6am to give Mizzy an hour-long walk before she leaves for work. "By the time she gets home she's tired and wants to sleep," explained Sue. "It works really well. At weekends and evenings I spend more time with her. On the day I don't work we do a training class in the morning.

"I think you need to be able to go home at some point during the day to give your dog some exercise so he's not left for any great length of time. As long as you can do that or a neighbour can let him out then I think that's fine."

"The dogs are hardly ever in the house alone"

Carol Fullerton is a full-time police officer who works shifts and her partner, Steve Smith, is a self-employed builder. The couple, from Woodford Halse, Northamptonshire, own two Springer Spaniels: Matt, who's 10 years old, and Louie, who's nearly one. 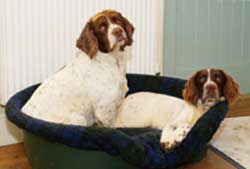 "We share dog ownership like people share caring for children," said Carol. "The dogs are hardly ever in the house alone because of our shift-working pattern."

When Carol is at home she has responsibility for Matt and Louie; if she's home in the morning she will take them for a 50-minute walk at a nearby reservoir. At other times both dogs go to work with Steve.

"His work is all local so if he can't take them he will always pop home, let them out, and go for a walk," added Carol. "When we got Louie we worried how we would cope but he fi tted in with Matt just fine.

"It's difficult to understand people who own a dog and leave him for eight hours a day. I couldn't do that. Some dogs get used to it but I would just panic and think he's bored."

"I make sure I do lots to keep Jack happy" 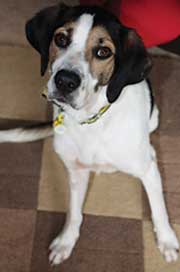 Nik Roddis, from Brackley, Northamptonshire, is a part-time secondary school teacher and part-time sports massage therapist. She always wanted a dog but thought she couldn't have one and work at the same time. However, she managed to rehome a dog through Dogs Trust several years ago and recently rehomed her second dog through the charity - two-year-old Trailhound Jack. He's normally left alone for three hours twice a week. When Nik does her massage therapy at the gym Jack is allowed to accompany her.

"I work part-time and I make sure I do lots to keep Jack happy," said Nik. "I'm only away one whole day a week and then he'll go to a doggy day care centre. I make sure that on the days I work I take him for a walk in the morning, leave him a Kong toy and the TV or radio on, and my neighbours keep an eye out. Every day he gets three long walks. I think it works quite well. Ben, my previous dog, was old and he wanted a quiet life."