Stimulate your dog's senses with his very own sensory garden The idea came from zoopharmacognosy specialist Caroline Ingraham, who helped put together a list of plants to include in the garden. Zoopharmacognosy is the process by which non-human animals self-medicate, using their sense of smell and influenced by their physiological and psychological needs.

Steve Hill, Bath Cats & Dogs Home's head of behaviour and welfare, who spearheaded the sensory garden project, said: "We were thinking about putting in a bit of lavender to have a calming effect on the dogs, but then Caroline gave us a whole list of other things.

"The animals are in a position to decide whether they want something or not. They might just want to inhale a plant, or they might want to ingest it.

"We've got lots of different plants in the garden. They are planted in tyres which gives the dogs a nice shelf to stand on while they self-select. They are in a quiet corner where dogs can come to make their selections.

"Valerian tends to be very popular, and hops is a popular one too, but more so for inhaling. Dogs will come into the garden and have a graze on wheat grass and barley grass."

The textured surfaces vary from logs under the dogs' feet to paving slabs with bottle tops embedded into the surface (smooth side uppermost).

Steve was inspired to create different surfaces after taking out stressed dogs for walks around a field. "Very often a dog will just pull, panting on the end of his lead, and he is not relaxed enough to sniff," he explained.

"However, if I take the same dog to an area where there is a narrow stretch of trees, slopes to walk up and down, and logs to climb over, straight away he's got to engage with his surroundings."

Other features in the sensory garden are a sandpit, which is very popular with terriers; a bamboo forest for dogs to fight their way through; a raised platform which is a kennel on stilts; a willow igloo which makes a nice tunnel for dogs to run through and is a place to shelter from the sun; an interactive ‘highline' in the more active part of the garden (a pulley operated wire on which toys are hung); a pond; a scent wall; and a doggy mound and cave - another hidey-hole to explore.

"Because we are such a large centre, stress is a big concern" explained Steve.

"The main reason for the garden was to have somewhere to take the dogs to de-stress. It is a quiet corner where you can take dogs for a run or to work them.

However, we've been using it in other ways too. It can be a good place to take potential owners to meet a dog for the first time. We take them down to the garden and let the dog off the lead and watch him interact; straight away the visitors see a much calmer dog. So the garden can also help with rehoming.

"Occasionally, we do things in the garden that dogs find stressful, such as having their back end groomed. We have also done vaccinations in the garden."

Behaviourist Ray Hobbs, who runs Canine Harmony Wales, based in Carmarthenshire, is passionate about sensory gardens. Over the years he has helped create sensory areas for several animal shelters.

"Sensory gardens are an opportunity for dogs to use their natural canine skills," he explained. "Dogs are naturally curious, and a sensory garden can give them that mental stimulation."

Ray has written a document outlining to rescue centres and dog owners, who are thinking about developing a sensory garden, what they should consider before rushing into the project. His aim is to help others develop a sensory environment where dogs can relax, and he can assist in sourcing enrichment equipment and suppliers, raising funds, and encouraging volunteers. Ray praised Bath's sensory garden and said he was particularly impressed with the zoopharmacognosy area. But he added: "Many rescues that put in a sensory garden do no evaluation of their dogs following its installation, which I think is very important. 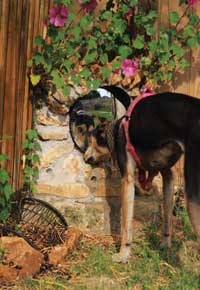 "That data could be fed back to other rescues."

With a little planning and consideration, it is possible for dog owners to make their own mini sensory garden.

Both Steve and Ray agreed that there were many things dog owners could replicate at home, easily and cheaply.

"The idea of having something simple to enjoy with your dog, such as a sensory garden, will inspire many owners," said Ray.

"Think about your dog and his needs. If you own a spaniel this is a busy type of dog who uses his nose. Rather than feeding him from a bowl, have a patch in the garden where you let the grass grow longer and throw his food into the long grass, allowing him 20 minutes to hunt the food out.

"And if you are going to create a garden, why not put in plants that will benefit your dog? Even if you just have room for one lavender plant that can still help your pet. Or perhaps plant a few pieces of willow which can be self-medicating; at Bath Cats & Dogs Home the dogs peel off the bark of the willow and chew on it.

"It's all simple stuff and it's harmless. And, best of all, people can have fun creating a small area for their dog.

"One idea is to create a sundeck which is a couple of feet off the ground. There could be steps and a ramp leading up to it, walkways, and tunnels. Your dog gets to exercise his body and it will give him a bit of height.

"Start hiding treats around the garden and make it a game. Lay down different surfaces, so your dog gets used to a different feeling under his feet.

"A digging pit is also nice. You can use a child's oyster shell paddling pool which you can put sand in, and then bury treats in the sand. It can be shut up to keep out rain and cats.

"I think cost is an important element but it doesn't have to be expensive.

"People need to anticipate that plants will get bent or trashed and might need replacing, but this is all part of a sensory garden - dogs enjoy that sensory experience of engaging with the plants."

In the first instance, Steve recommended looking at your dog and identifying which plants he might want to self-select.

"Different things will be popular with different types of animal," he said.

"I would recommend grasses such as wheat grass and barley grass, as every dog will get something out of these.

Marigold is really easy to grow and many dogs enjoy being around it.

"If you want to build something in your garden, then maybe a two-storey kennel so your dog has somewhere to climb up to, but make it safe so he can't jump off.

Ours has mesh on the outside.

"A sand pit and water area are easy features for people to create at home.

"The main instant benefit of a sensory garden is enrichment. Even if you only plant one new plant it's another smell for dogs to explore." 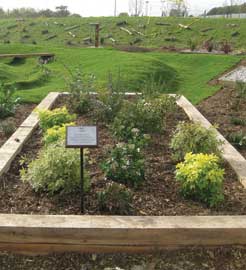 Best plants for your sensory garden

Here are some of the plants featured for self-selection in Bath Cats & Dogs Home's sensory garden: