The father of psychoanalysis, Sigmund Freud, devoted his life to studying the unconscious human mind, but in the end he much preferred the uncomplicated company of dogs, says Isabel George.

When Wolf, a huge black German Shepherd, joined the Freud household at Berggasse19, Vienna IX, he had one job — to protect Anna, the youngest of the professor’s six children, who loved taking long walks through the city’s winding streets.

Wolf was Freud’s gift to Anna, but it wasn’t long before the therapist’s curiosity fixed on the dog’s instinctive and pronounced drive to protect. In therapy terms, Freud experienced ‘transference’; he saw his own protective feelings towards his child projected onto Wolf.

But where Freud had to hold back from scaring away Anna’s unsuitable suitors, the dog happily gave them a little ‘nip’ to send them quickly on their way! Ironically, and to Freud’s amusement, this included his English biographer Ernest Jones.

As Freud observed: “Dogs love their friends and bite their enemies, quite unlike people, who are incapable of pure love and always have to mix love and hate in their object relations.”

Wolf’s arrival in 1925 changed the Freud family dynamics in a way they had probably never anticipated. Almost immediately the dog became the focus for emotional support. Freud’s affection for Wolf was fuelled by the loss of his grandson, Heinele, who died young, and Anna’s love for her father was often communicated much more freely through their mutual affection for Wolf, until Freud acquired a dog of his own.

The idea of having a Chow Chow was inspired by Freud’s close friend, the author and psychoanalyst Princess Marie Bonaparte. Following surgery for cancer in his jaw in 1923, Freud was comforted in his recovery by the princess’s own pet, Chow Chow Topsy.

In a strange twist of fate, man and dog were suffering from the same condition in the same part of the body, at the same time, and endured similar surgery followed by radiation. For Freud’s wife and children, the golden-haired Chow Chow came to represent a vision of hope for his recovery, something which Topsy’s owner later wrote about in her book ‘Topsy Chow-Chow au Poil d’Or’.

But it was Jofi, a large orange-brown Chow Chow who embodied the power of canine companionship for Freud. Jofi arrived in 1930 and slipped into the rituals already created around Wolf. For instance, every year on May 6, Freud’s birthday, the dogs presented him with poems (‘written’ by them through Anna) and attached by a ribbon to their collars. These became the highlight of the special day, and even if Freud happened to be working away from home at the time, the verses were still created for him.

For seven years Jofi never left her master’s side, and that included the hours that he spent talking therapy in his office with his clients. Just as Wolf had always been a good judge of character, Jofi was an excellent timekeeper, who yawned and then wandered towards the door when the client’s hour was up! Sometimes she would get excited and jump on the client, prompting Freud to say: “You see, Jofi is so excited that you’ve been able to discover the source of your anxiety!”

Freud adored everything about Jofi and often mentioned her exploits in his diaries. She was the centre of his universe, and her happiness and health were his priority, which is why, in January 1937, he arranged for her to undergo a complicated operation to remove life-threatening ovarian cysts. Sadly, although the procedure went well, Jofi suffered heart failure and died a few days later. Freud was inconsolable, saying: “…one cannot easily get over seven years of intimacy.”

Immediately confessing that, at this time of his life, he could no longer bear living without a dog, Freud welcomed a Chow Chow called Lun into his home  the following day.

By the summer of 1938, Vienna was in political turmoil. Already the Nazi party had publicly burned a number of Freud’s books and the family’s large city apartment was looking increasingly attractive to the enemy.

Unable to watch the uncertainty that was surrounding her friend, Princess Marie Bonaparte arranged for Freud and his family to escape, first by train to Paris and then on to London. Lun travelled with them. 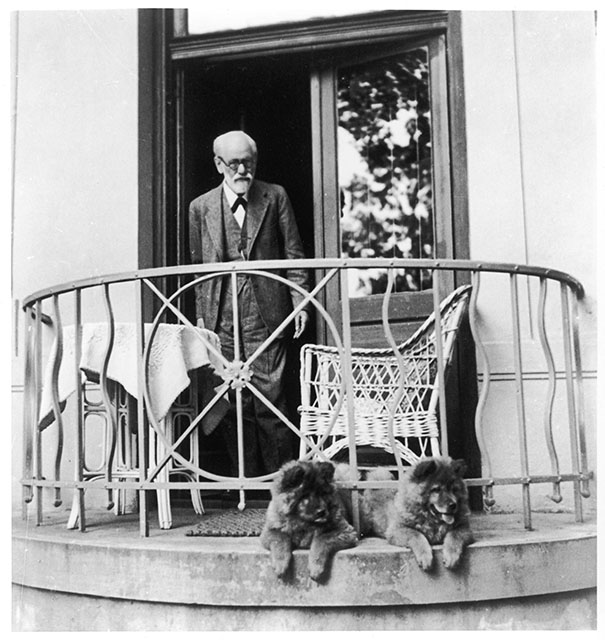 Freud with his beloved Chow Chows.

On arrival at Dover, the dog was taken by the authorities and transported to quarantine kennels in Ladbroke Grove in London to start six months of isolation. Freud, now 82 years old, was devoted to Lun and just days after settling into his new home, made the journey across the capital to the kennels, which he called the dog’s ‘prison’. The kennel manager reported: “…I have never seen such happiness and understanding in an animal’s eyes. He [Freud] played with her, talked to her, using all sorts of little terms of endearment, for fully an hour… he is resolute in coming to see Lun as often as he can.”

A Pekingese called Jumbo was brought in to keep the professor company at home while Lun was away, but the well-intentioned plan didn’t work. Freud remained loyal to his Chow Chow and on December 2, 1938, Anna and Princess Marie Bonaparte collected the dog from quarantine where the world’s press had gathered to cover the event. As the images of
the release winged their way across the globe, an excited Lun was reunited with her now ailing master. Freud’s cancer had returned with a vengeance and while morphine could help with the physical pain, there was no easing the emotional hurt that he experienced on the day Lun turned away from his face — most likely due to the odour.

The man known for straight talking in his profession had grown to admire dogs for their honest reactions. And, at the same time, he became disillusioned with human beings who could march mankind into a second world war. 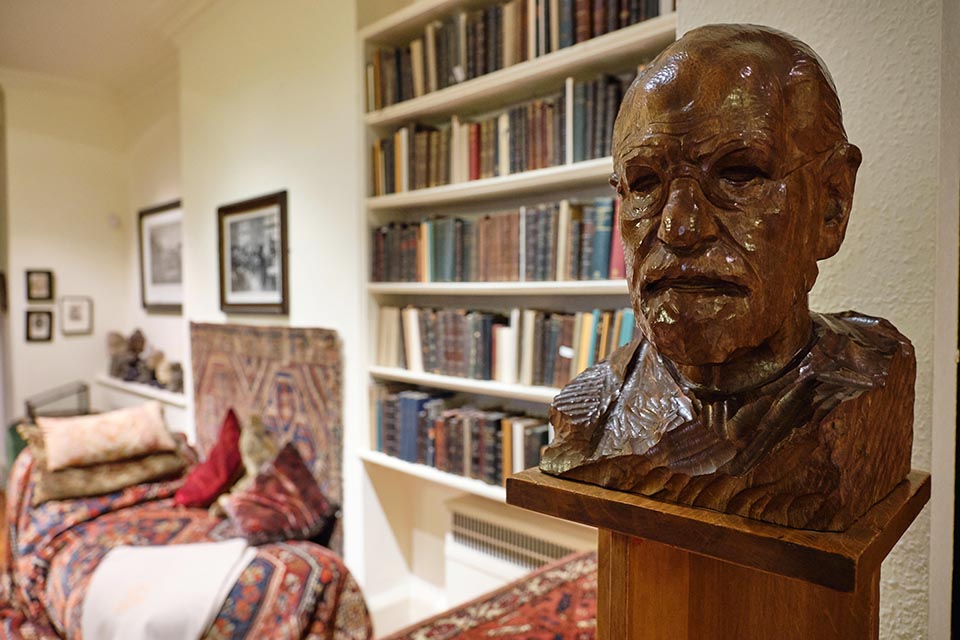 Freud’s former home, now the Freud Museum, with the psychoanalyst’s couch in the background.

Sigmund Freud died on September 23, 1939, aged 83. His daughter, Anna, stayed on in their London home in Maresfield Gardens, now the Freud Museum, where Lun and the other dogs enjoyed their walks on nearby Hampstead Heath. At the time of her death in 1982, Anna still had Chow Chows, including one she named Jofi in honour of her father’s favourite.