Tyber Cranstoun, lead singer of chart-topping band The Dualers, tells Joanne Bednall how he juggles dog ownership with appearances at gigs and festivals across the country. 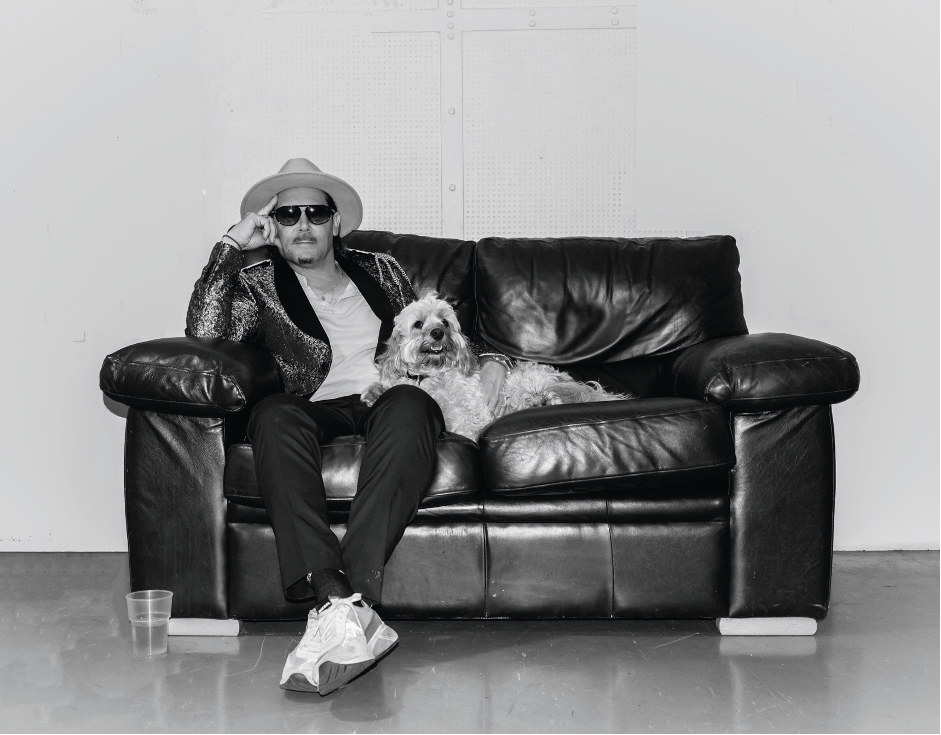 From living in a lock-up garage in South East London to headlining at Wembley Arena and boasting 20,000 Instagram followers, former street busker turned ska and reggae musician Tyber Cranstoun, has fi nally achieved his dream of making it in the music industry.

The nine-piece Dualers’ lead singer and founding member credits much of his success to the band’s loyal army of fans, and his three dogs. Famous for hits such as ‘Kiss on the Lips’ and ‘Truly Madly’, the musician can often be seen backstage with his gig-loving Cavapoo/ Cockerpoo, Gigi.

When he’s not playing in front of sell-out audiences as part of the band’s current ‘Road to Wembley’ tour, Tyber, 42, loves nothing more than relaxing at home in East Sussex with Gigi, one-eyed French Bulldog Claude, and eight-year-old German Shepherd Apollo.

Q) Have you always been a dog lover?

A) “I grew up with a Dobermann called Pamsy, followed by Rottweilers, an American Bulldog X terrier, a Chow Chow, and Bull Mastiff s.”

Q) Tell us about your current dogs.

A) “I bought German Shepherd Apollo for security and as a family dog for my daughter Ella’s fifth birthday. He’s very protective and particularly loves my dad and the gardener.

“Claude is an eight-year-old French Bulldog, who we got as a puppy after Ella became obsessed with the film, ‘The Hangover’. He needed surgery a year ago to remove one eye but he has adapted well. Claude is toy and ball mad and wants to fetch a ball like his life depends on it.

“Gigi was sold to me as a Cavapoo — but she could be a Cockerpoo — as a ‘pick up and cuddle dog’ for Ella.

“She’s been in music videos, songs, and big venues, and met famous people such as Huey Morgan from Fun Lovin’ Criminals and the band Scouting for Girls — and she’s still only four!

“I don’t know many people who have such an eclectic mix of breeds — a Frenchie from France, a Cavapoo/Cockerpoo from England, and a shepherd from Germany — it’s like the World Cup of dogs at home!” 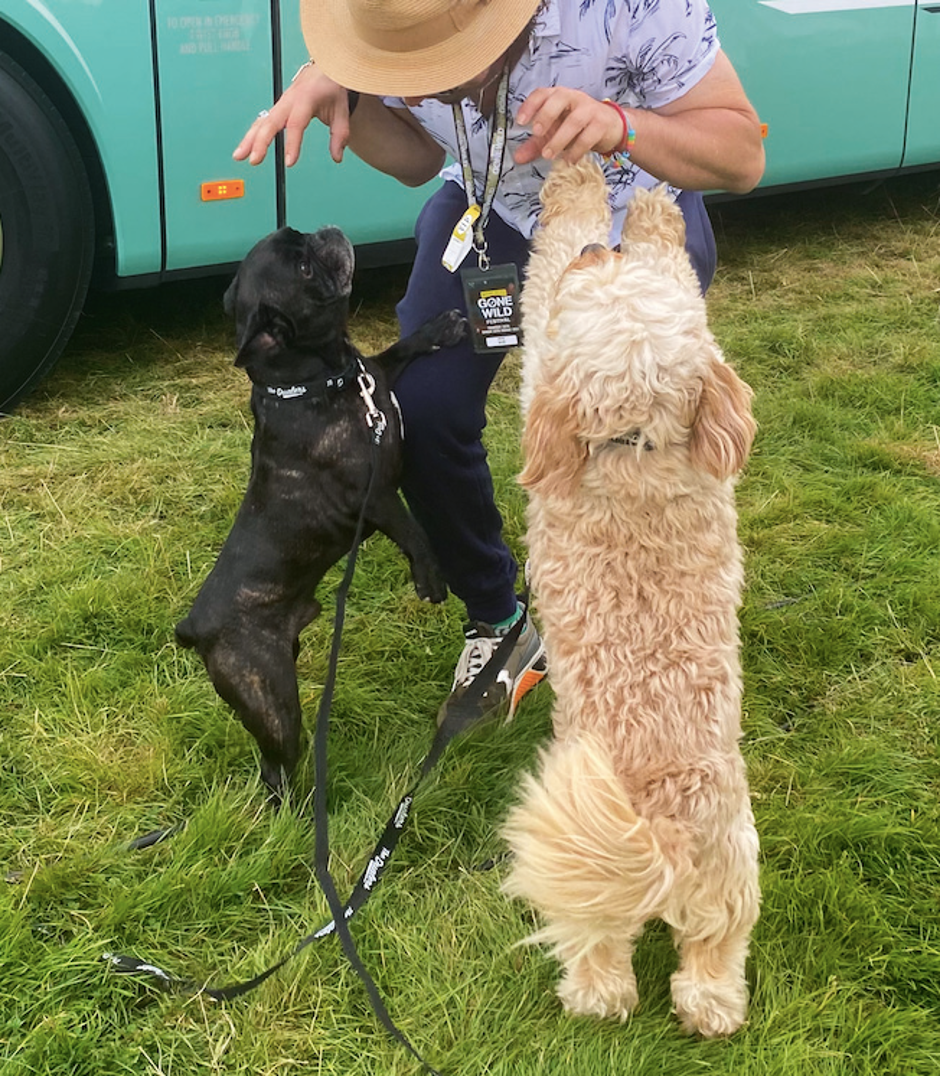 Q) So do you take all three with you on tour?

A) “Apollo stays at home while Claude comes to some gigs, but it’s Gigi who’s the seasoned festival-goer! I started taking her as a puppy and she loves getting in the van and coming on tour. She has become our festival mascot and has her own big following. Our fans get disappointed if she doesn’t go — they’re always asking to have their photo taken with her.” (Pictured right, Tyber on the road with Claude and Gigi).

Q) What are the challenges of taking dogs with you?

A) “Over the last few months, we seem to have had a lot of gigs up north, which would have meant eight or nine hours in the van, so it hasn’t been fair to take her to those.

“When we book hotels, we have to search near the venue for Travelodges, which accept dogs, rather than Premier Inns, which don’t, and then find an area where she can go to the loo.

“We used to ask venues if they accepted dogs but they’d say they had to consult the rulebook, so now we just turn up with them so they can’t say no!”

Q) Is Gigi allowed backstage with you or does she have a ‘minder’?

A) “Jenny, my PA, takes charge when necessary but normally Gigi’s backstage with me. During one performance at the Clapham Grand in London, Gigi was in one of the boxes and saw me performing. She ran out of the box, down the stairs, and onto the stage.

“I never worry if she or Claude come on stage — we don’t take things too seriously and just embrace it.”

Q) Does Gigi appear on stage with you often then?

A) “At The Leadmill in Sheffi eld two years ago, it was like a rabbit warren backstage and we lost Gigi down the many corridors. A crowd of 1,000 were watching the support band when we heard a roar of laughter. Gigi had gone straight on stage and won the audience over for them, and the lead singer soon had her under his arm!”

Q) Is it true she even ‘sings’ on one of your songs?

A) “You can hear Gigi barking very loudly at the beginning of ‘Dancing til the sun comes up’ on our 2019 album ‘Palm Trees & 80 Degrees’, which reached number 11 in the charts. I’ll always hear it and think: ‘that’s Gigi’.”

Q) Dogs stealing the limelight! What could possibly go wrong?

A) “Our guitarist Peter Lee isn’t too fond of dogs but he loves Claude. Once, we were playing to about 3,000 people when Claude meandered across the stage and right at the song’s climactic moment, trod on the guitar pedal and the guitar cut out. You couldn’t see Claude because he’s black and it was dark, but Peter forgave him. Claude has a special talent for ruining important moments on TV — he’ll wander in and stare at me just as Arsenal are about to score. I’m always saying: ‘Not now, Claude!’”

Q) You must have many funny anecdotes about life on the road with Gigi.

A) “Gigi is really clever — her brain is constantly working — and she’s always hunting for food. One time, she managed to get into a bag belonging to our tour bus driver. She found his packed lunch, opened the plastic wrapping, and ate the outside of his Scotch eggs, leaving just the eggs. She’s an absolute madam and prefers to do her own thing — she wants action all the time!”

Q) What doggy items do you always take on tour?

A) “Water, a ball, dog snacks, and a bed. I’ve sometimes forgotten a lead but have managed to find some string!

“Fans are always bringing the dogs gifts. I look at all the toys and think: ‘that’s from Glasgow; that’s from Liverpool.’ Some people have even made jackets for them. If Gigi won’t eat her usual food, I know it’s because someone’s given her chips or she’s stolen a chicken sandwich.”

Q) What’s your routine at home?

A) “The dogs want me to throw a ball for them all the time, or we love going to Cooden Beach, near Eastbourne. But I have to take a ball!”

Q) What’s the best thing about having dogs?

A) “It would be easier if I didn’t have dogs, but they’re part of living and breathing for me, and remind me of my childhood.

“Dogs don’t know whether a person is a celebrity or not; all they want is someone to give them food and show them love.

“They are so uplifting and always put people in a good mood — just like our music!” 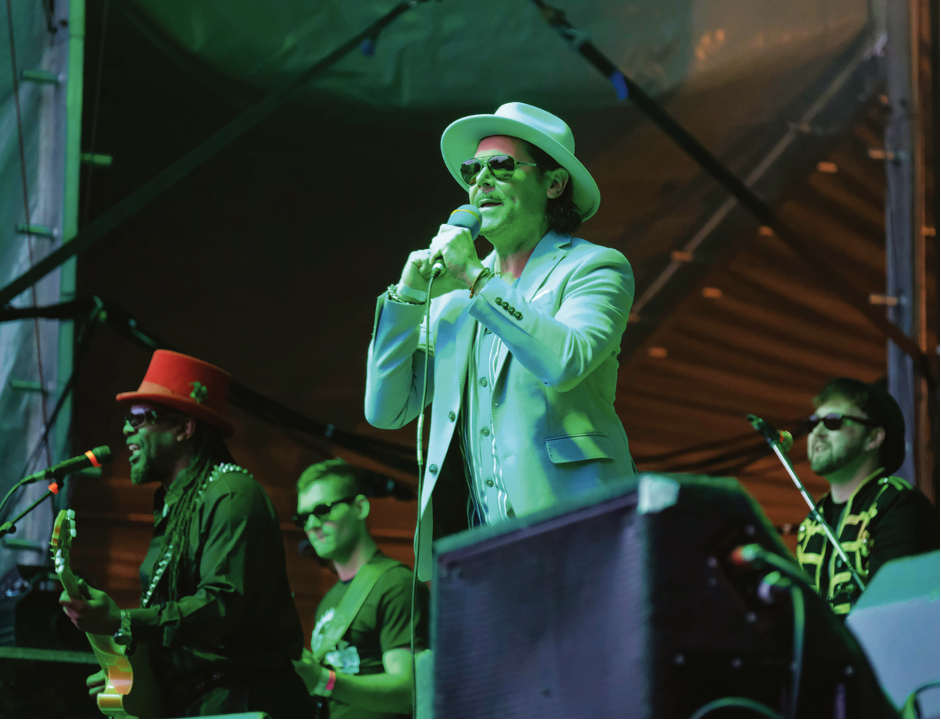 The Dualers’ unique Jamaican-style rhythm and blues sound, combined with their lively vibrant performances, have resulted in them being branded Britain’s fi nest ska and reggae band. ‘Red Light’, the single from their new album ‘Voices from the Sun’, is set for release on August 12. The group’s 2022 ‘Road to Wembley’ tour, which took in Wembley Arena in May and Glastonbury last month (June 26), culminates at the Forum in Birmingham on December 10. For dates, venues, and to buy tickets, visit www.thedualers.com

Check out The Dualers’ dog merchandise page for branded dog coats, bowls, collars, and leads, at www.thedualers.com/store/c17/Dog_Accessories.html or follow @gigi_the_dualer_pup on Instagram.