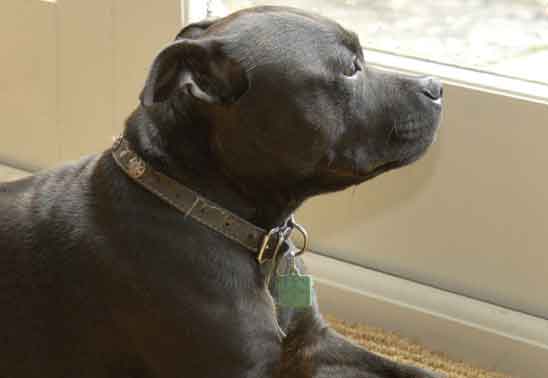 Many of us have experienced it - you suddenly find yourself thinking about a particular person and seconds later they call you on the telephone.

As a pet owner, you might have often had an uncanny feeling that your dog knows your innermost thoughts, or can anticipate your next move before you've even made it.

The majority of people tend to brush these experiences off as merely a bizarre coincidence, but is there more to it? According to biologist Dr Rupert Sheldrake, animals possess powers of perception that go beyond the five known senses - namely telepathy, a sense of direction, and the ability to predict events (premonitions).

During the 1990s Rupert set out to investigate the phenomenon of dogs knowing when their owners were returning home. This innovative research saw more than 800 people contact him with first-hand accounts of dogs who could anticipate when their owners were on their way home and would wait patiently for them at the front door or window. In some cases dogs did this more than 10 minutes in advance.

Recently he's been researching another phenomenon: dogs who know when a particular person is on the telephone before the call is answered.

For the last five years Rupert's been exploring human telephone telepathy and his findings inspired him to revisit animal telepathy.

"Eighty per cent of people have experienced thinking about someone before they ring," he said.

"In the course of my original research people told me about lots of other things dogs and cats did - one of these was knowing when certain people were calling. Dogs would get excited when their owner or someone close to them rang, but ignored other peoples' calls.

"Technology has changed; now people have mobile phones and I don't know how dogs react if one of these rings.

"There are some dogs who bark whenever the phone rings but that's not what I'm talking about. I'm interested in dogs getting excited before it's answered; some even get excited before it rings."

Does your dog appear to know who's on the telephone? If so your experience could assist Rupert's research, especially if your pet does it regularly.

He's appealing for people with stories of dog telephone telepathy to contact him, and ideally some owners who'd be happy to take a more hands-on approach.

Rupert said experiments for telephone telepathy were easy to set up by pointing a webcam or video camera at the telephone. Someone close to the dog would be asked to call the house at random times, as well as a person the animal didn't know, and his reactions would be monitored.

"Fifty per cent of dogs know when their owners are coming home but the number of dogs who respond to the telephone is much smaller," he said. 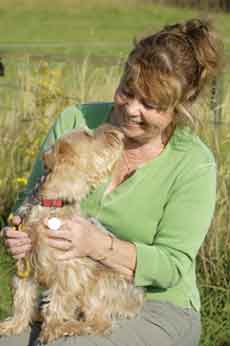 "No one has ever investigated this systematically before. If people write and tell me their stories, and are willing to get involved in extra experiments, we will visit them and set up these tests.

"Telepathy, meaning a distant feeling, is about picking up feelings or intentions. Dogs are telepathic with their owners in different ways.

"When you set off home you have to have an intention - that's when dogs respond, when you decide to go home or get into the car and start driving. They respond to intention. It's the same with a telephone; you have to have the intention to make a call before you do it and that's why some dogs, and people, pick up that intention before the phone rings."

Pets aren't in tune to the intentions of anyone but their owners or someone they're particularly close to.

Rupert holds the view that a strong connection exists between humans and animals that lies beyond current scientific understanding.

"The sharing of emotional bonds between members of a social group, such as members of a family and their dog, means there's the possibility of picking up intentions or thoughts," said Rupert. "Through these bonds people connect to each other and their animals.

"The reason this is so controversial in science is because it's thought that this shouldn't be able to happen, is impossible, and doesn't happen. I have to battle with this all the time; we shouldn't pretend this phenomenon doesn't occur but investigate what's going on. I think it's part of science to expand our understandings."

Rupert believes these phenomena, often attributed as paranormal or a sixth sense, exist as part of the evolution of the animal world.

"The ancestors of dogs are wolves and some people are convinced that wolves communicate telepathically at a distance," he said. "I think that might be the basis for telepathy in dogs.

"Telepathy is a normal means of communication by members of social groups. I think it happens in the wild and with people; when dogs are domesticated, people treat them as members of the family. I think telepathy is part of evolution and it's there because it's useful." 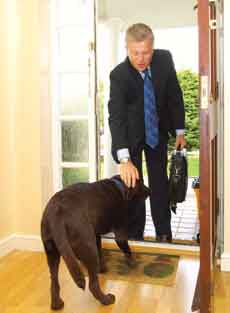 Rupert's intrigue in the phenomenon of some dogs knowing when their owners were returning home was sparked after hearing lots of stories about people who'd had such experiences.

He carried out a series of experiments, including monitoring the reactions of a dog while his owner was out. The owner was made to travel at least five miles away from home to be out of smell and hearing range, and arrived home at random times; other people in the household weren't told when to expect the owner and the owner didn't know when to make the journey home until the last moment.

Experiments were also carried out using different and unfamiliar methods of transport. In 85 per cent of cases the dog went to wait at the front door.

"When the person decided to come home the dog responded to the intention before the car or taxi was moving," explained Rupert. "Statistically it was very significant."

A new edition of Rupert's book ‘Dogs That Know When Their Owners Are Coming Home and Other Unexplained Powers of Animals' was released in America last month, containing more case histories, extra experiments, and further research on other animal breeds. The new edition is scheduled for release in the UK in August.

It's not just the power of telepathy that pets are gifted with. Other perceptive powers include the ability to predict events such as earthquakes or disasters that are going to happen to their owners, as well as an intuitive sense of direction, which enables animals to find their way home from far away. However no one really understands how these things work, according to Rupert.

"China uses the ability of animals as a way of predicting earthquakes successfully," he added. "If we paid attention to animals we could predict earthquakes better.

"I kept pets from an early age and was fascinated by things they could do that I couldn't understand and other people couldn't explain.

"The thing that intrigued me most was homing pigeons; I kept them and tested whether they could find their way home, and no one knew how they did it. That convinced me there was a lot that we don't understand." 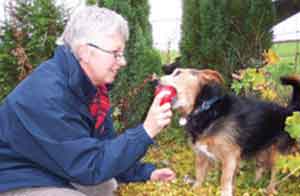 For a number of years Pam Smart's parents looked after her terrier-cross Jaytee while she was at work. They often noticed unusual behaviour - he would sit by the window at certain times as if waiting for Pam to return home.

"My dad noticed it first and would say: ‘He's human that dog, he knows when you're coming home'," explained Pam, from Ramsbottom, Lancashire.

"I thought nothing of it and dismissed it as routine, but my dad said he did it all of the time. He would sometimes prick up his ears because he'd seen a cat outside, but he'd also do it when my parents couldn't see anything. It was as if he could see something that wasn't there."

"He knew when I was coming home no matter what the time or method - that was the exciting bit," said Pam. "We disregarded the last five minutes of my journey home so we got rid of anything to do with hearing.

"I thought it was absolutely extraordinary. I had thought my parents had got it wrong and that there was another reason for his behaviour.

"I knew animals seemed to have abilities beyond our comprehension but I didn't have any notion that Jaytee was able to do what he did."