Dogs have accompanied armies into conflict since man first picked up a spear in anger. Serving alongside members of the armed forces, they have consistently displayed steadfast devotion to duty and unswerving comradeship in the throes of conflict.

And now the UK’s military working dogs (MWDs), past and present, are to be honoured with their own national memorial. At a special event at Westminster’s Portcullis House in June this year, representatives from the Royal Navy, the Army, and the Royal Air Force joined members of parliament, canine charities, and welfare organisations to celebrate the launch of the memorial, which will be located in the suitably peaceful surroundings of Brynford in Flintshire.

Plans for the memorial

Rising out of the surrounding countryside, the central Portland stone cenotaph will be guarded by bronze sculptures of four heroic canines, who served alongside the armed forces in various conflicts: prisoner of war dog Judy, anti-terrorist tracker dog Lucky, and arms and explosives search dogs Theo and Buster — four courageous dogs who walked into war zones and served beyond the call of duty. The dogs will represent all military working dogs. 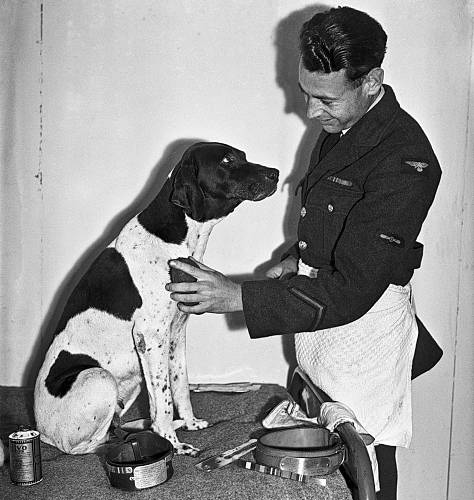 Judy, a liver and white Pointer, was gifted to the Royal Navy as ship’s mascot of HMS Gnat, but the outbreak of the Second World War in 1939 soon overturned her peaceful life. She survived her ship being torpedoed, and her next ship, the river gunboat HMS Grasshopper, being attacked and run aground. She saved the lives of the crew by sniffing out a fresh water spring, but when they walked into a Japanese-held village, Judy faced her greatest challenge as a prisoner of war.

It was at the camp in Medan that Judy met leading aircraftsman Frank Williams. One day he offered the starving dog his handful of rice, and, from that moment, she never left his side. Every day Judy’s life was under threat; she detested the guards and the feeling was mutual. In an effort to protect her, Frank somehow managed to persuade the camp commandant to register the dog as a prisoner of war. And so, Judy — PoW 81A Medan — saw out the war under Frank’s guardianship.

When the war ended in 1945, Frank and his PoW friends smuggled Judy aboard their troopship bound for Liverpool. Thanks to Frank’s careful planning, Judy made it home as a stowaway, and, after spending the required six months in quarantine kennels in Surrey, she began a new life in peacetime.

Her first duty was to accompany Frank on visits to families who had lost loved ones in the prison camps. Frank always said that Judy’s presence gave people comfort, because that once skinny, starving dog was a symbol of survival. It was for her ability to support and inspire her fellow prisoners to bear their suffering that Judy received the PDSA Dickin Medal — the animals’ Victoria Cross. As a war hero, she was invited to ‘bark’ live on air via the BBC World Service, and proudly attended the victory parade in central London, where she met the King and Queen before an adoring public.

Judy lived out her life with Frank who, after the war, took a job on a government scheme in Africa. Over the years, she survived several scrapes with the local wildlife; only cancer managed to defeat her in the end. Frank was faced with the most difficult decision of his life — to say goodbye to Judy. He didn’t want her to suffer to the end, and so Judy was put to sleep and buried in the jungle. Her grave was marked with a plaque inscribed with the dates of her service record: Judy — PoW 81A Medan — the only dog to be officially registered as a prisoner of war. 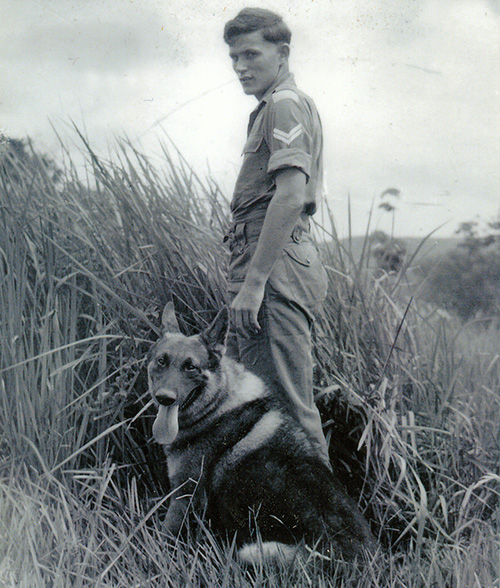 Lucky was one of four German Shepherds selected by the Royal Air Force Police Dog Unit for special duties during the Malaya campaign, otherwise known as the Malaya Emergency, which began in 1948 and ended in 1960. Lucky served for three  years and was the only dog in the team to survive his tour of duty.

Lucky, Jasper, Bobbie, and Lassie underwent rigorous training to form an elite anti-terrorist tracker dog team, capable of locating and exposing insurgents hiding out in the Malaya jungle. The dogs’ highly sensitive sense of smell gave them the edge in an incredibly hostile environment, where the dense vegetation, intense heat, and lack of reliable intelligence made tracking the armed guerrilla forces almost impossible for the ground troops.

Lucky and the other air dogs were attached to the Malay police and several British Army regiments. During their time in Malaya, the dogs were responsible for the capture of hundreds of communist terrorists, including, in 1951, the notorious gang leader Lan-Jang-San, who was the mastermind behind so many deaths of innocent local people. The tracking skills of the dogs ensured that the terrorists were apprehended, and further deaths and casualties prevented.

Sadly, Bobbie, Lassie, and Jasper lost their lives in the line of duty, while Lucky’s handler, RAF police veteran Corporal Bevel Austin Stapleton credited his dog with saving his life many times. In recognition of his service and life-saving action in conflict, Lucky was awarded a posthumous PDSA Dickin Medal on February 6, 2007. 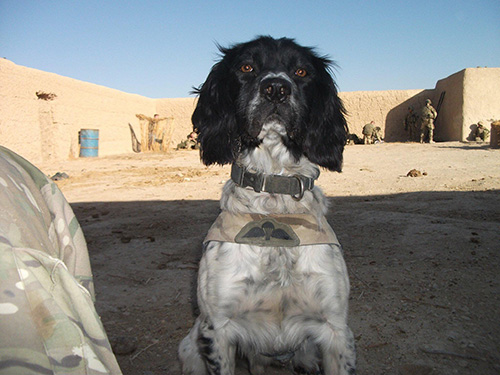 Theo — military working dog no. 8260 — was gifted to the Royal Army Veterinary Corps (RAVC) by a member of the public. While still a trainee at the Defence Animal Centre in Melton Mowbray, the bouncy Springer Spaniel showed everyone that he had something special about him. At 17 months old, the black-speckled spaniel was making a name for himself as an exceptional arms and explosives search dog, and, with Operation Herrick 13 looming, his cards were marked for a tour of Afghanistan. 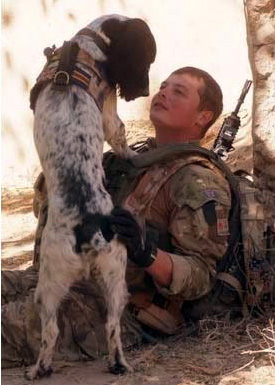 Lance Corporal Liam Tasker had noticed Theo in training. Two weeks after deployment to Helmand Province, in September 2010, soldier and dog were teamed up. As predicted, they bonded immediately. Alongside Liam, Theo proved to be an exceptional arms and explosives search dog, patrolling daily with several companies within 2 Para, including the small strike teams. Five months into his tour of duty, Theo had located a record 14 Taliban roadside bombs in addition to many other finds, saving many lives.

Theo located every Taliban threat in his path, including the soldiers’ worst nightmare, the improvised explosive device (IED). The men came to trust the dog who worked so hard for the simple reward of a chew on his favourite yellow ball.

In February 2011, the partnership appeared in the media, showcasing the work of the military working dog teams deployed to the conflict in Afghanistan. Less than a month later, Liam and Theo were again the focus of media attention.

On Tuesday, March 1, 2011, while on patrol with No 2 Company, 1st Battalion Irish Guards, Lance Corporal Liam Tasker was killed in action in the Shingazi area of Nahr-el-Sarraj in Helmand Province. Theo, who was at his handler’s side when he fell to a sniper’s bullet, died hours later from a seizure; some believe he died of a broken heart.

Liam, who was mentioned in despatches, left behind a handwritten profile of Theo, which chronicled his love and respect for the dog who had saved so many lives. Theo was awarded a posthumous PDSA Dickin Medal on October 25, 2012.

The dog who saved a thousand lives 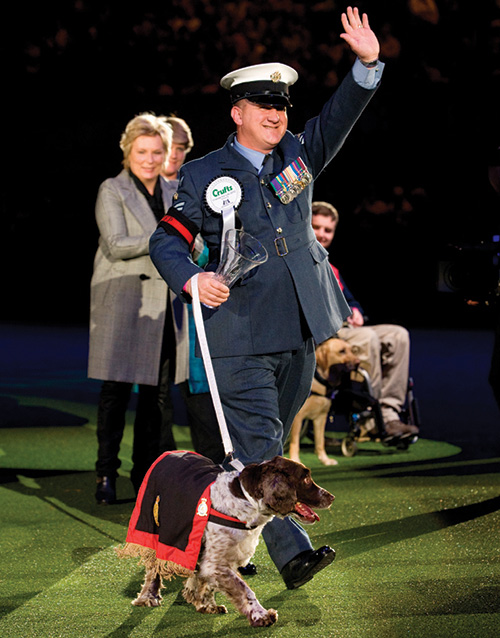 Buster, an English Springer Spaniel, arrived at the Defence Animal Centre in Melton Mowbray in 2003 to train as an arms and explosives search (AES) dog. During his career as a military working dog with the RAF police, Buster was credited with saving a thousand lives, both military and civilian.

Between 2006 and 2007, Buster was deployed to Bosnia Herzegovina for the first of two tours, where his expertise as an arms and explosives search dog was in high demand, locating illegally held weapons and explosives. This put him in a good position to be chosen for his next assignment — Afghanistan.

Flight Sergeant Michael ‘Will’ Barrow needed an AES dog to join him on a special operation in Afghanistan — and Image: The so it was that Buster came into his life. The partnership of Buster and Will Barrow was one of those rare and special relationships. The bond between the man and dog translated into an exceptional friendship and successful work record. During their time in Afghanistan, Buster was attached to several regiments.

As well as saving many lives, he was instrumental in the apprehension of insurgents, including the arrest of two suicide bombers. Alongside Will, he carried out his duties in the shadow of terror and uncertainty. Returning to Iraq as part of Operation Telic in March 2009, Buster provided safe passage for the many convoys to Kuwait in support of the UK drawdown. As befitting a war dog with his record, he had the honour of being the last UK military working dog to leave Iraq.

After an action-packed career, Buster came home in March 2010, ready for his retirement in 2011. After a record five tours of duty, he settled into a life of ceremonial duties as the RAF police mascot — an honour bestowed on him for life. Other honours rolled in, including the Crufts Friends for Life Award in 2012. Buster died at Will’s home in Lincolnshire on July 16, 2015; Will was with him to the end. There is a memorial to Buster at RAF Waddington in Lincolnshire.

The event at Portcullis House marked the launch of the National Military Working Dogs Memorial Trust, the charity set up to raise the £150,000 needed to turn the memorial blueprint into a reality. The charity has the support of key political figures, and the blessing of all branches of the armed forces and the families of military dog handlers, past and present.