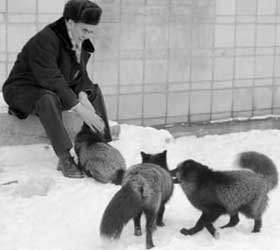 The extent to which canine behaviour can be inherited was proven by a famous experiment undertaken by the Russian geneticist and silver fox farmer, Dmitri Belyaev, decades ago.

Through only selecting for breeding the lower percentage of foxes with inherently tamer or more docile genetic temperaments, Belyaev proved that it was genes, rather than early nurturing environment, which had the most profound influence on later canine temperament and behaviour. What he eventually ended up with were foxes that behaved completely differently to their wilder ancestors, and far more like modern pet dogs - less aggressive, less timid and fearful, and far more compliant and responsive.

Moreover, this same effect on their behaviour had proven impossible to achieve through external influences alone - namely raising them with humans from birth.

One of the biggest problems we have, with so many dogs today, is that while much of their basic inherited character type has stayed the same for generations the demands and expectations people have of their behaviour, as pets, has drastically changed.

This is particularly the case with dogs whose genetic minds were originally shaped for a specific working function, such as guarding breeds who were bred to have fundamentally more distrusting and aggressive natures. Or hunting dogs (such as sighthounds or Beagles), bred to have exceptionally strong chasing, hunting or tracking instincts. Or running dogs, like Huskies, bred to have a very strong impulse to keep running forward, but rather less impulse to return back to an owner when called!

The end result of all this mental/ behavioural incompatibility can be much frustration and conflict on both sides, as the dog is unable to change his innate genetic mindset on an owner's whim in order to be more ‘friendly', ‘sociable' or ‘obedient', or is unable to stop all the stronger inner predatory compulsions he was born with on an owner's command.

Life on the lead

Mental incompatibility is also what so often condemns today's dogs to a far poorer quality of life, including lives where they are never let off the lead to run free, sniff and explore, or socialise with other people and dogs. Either because they are deemed to be too anti-social and aggressive, or because they simply won't come back to an owner when called.

Of course genes will never be the whole story, when it comes to the way any dog behaves. And, even when dogs are born with greater genetic disadvantages, personality wise, this still doesn't mean that with better training, and greater insight into their mental limitations, much can't be done to improve their later behaviour and general quality of life. 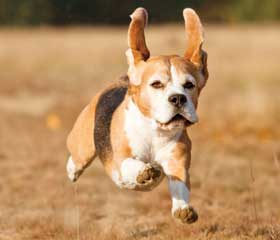 In the future, when breeding dogs the issue of making their genetic minds and temperaments far more compatible with the demands of pet life should be taken much more seriously. It shouldn't be something in a dog that is just left more to chance than deliberate design. If only because, as we know all too well, from the number of animals destroyed or abandoned every day, due to their less tolerable or curable innate behaviour, when dogs fall foul of human expectation, it is generally they who end up paying the highest price.

How dog behaviour gets inherited

The behaviour of dogs, like all animals, gets inherited via genetic pre-disposition, and genetic memory.

Genetic pre-dispositions towards certain kinds of behaviour or attitudes in life are inherited at birth, much like the pre-programmed default factory settings you may find on a computer or TV when you buy it new.

What they govern are things like a dog's prevailing temperament/ personality, and the type of behaviour that comes instinctively to him when faced with different situations or events. For example, everything from how readily he will pursue prey to how confident, fearful or aggressive he will become in more testing social situations, and even how strongly he will emotionally attach to an owner, making later separation issues in him more likely.

Genetic memory is a rather different phenomenon. If an animal repeats a specific behaviour enough times, a ‘memory' of this behaviour eventually gets stored in its genes and cells, which is then passed down from one generation to the next. This is how birds know when to migrate, for example, or how to build nests, without any other bird showing them. Or how sheepdogs know how to stalk and round up sheep, without any other dog showing them. It is purely down to the effects of inherited genetic pre-disposition and memory.

The same phenomenon is behind all the different - and also far more genetically magnified - working instincts found in different breeds of dog. In other words, they are born with a certain inherited compulsion to behave in a specific way.

Typical traits that are inherited in dogs

Any trait a dog inherits will fall on a spectrum of more or less likely to happen. Commonly inherited traits include:

So much conflict, between owner and dog, could be spared if people thought longer and harder, in advance, about the genetic nature of the dog they acquire as a social companion.

For instance, if it is important for you to have a highly sociable, trainable kind of dog, who will more reliably come back to you when let off the lead, don't get a breed that is renowned for being far less sociable or trainable. Do your research to see what kind of genetic advantages, or disadvantages, different breeds or types of dog may hold for you.

Too many people seem to think that all puppies are the same blank canvases, out of which they can shape any manner of desired future behaviour, instead of individuals whose future possibilities have already been pre-ordained to some extent by the nature of the genes they inherited at birth.

It's important to also understand that any parent dogs, or families of dogs, in whom aggression, nervousness, fearfulness, or neurosis has been clearly seen, are very likely to produce puppies that are similarly inclined. Too often, people only see the direct link between a more nervous/aggressive dog and past relatives when it is too late.