My dog gave me back my confidence 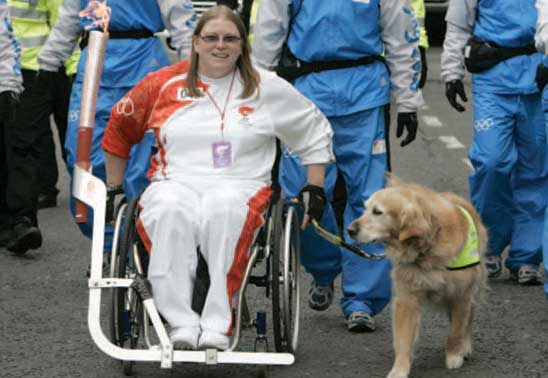 Wendy Morrell, from Broadstone, Dorset, tells Joanne Bednall about her ‘once in a lifetime' Golden Retriever from Dogs for the Disabled, who became far more than an assistance dog.

There aren't many dogs who have seen Niagara Falls, been whale watching in California, scaled Chicago's Sears Tower, accompanied the 2008 Olympic torch across London Bridge, and alerted their owner to epileptic seizures 35 minutes beforehand - while still putting the milk bottles out every night. But my beloved assistance dog, Caesar, had. And much more besides.

"Life before Caesar meant that just a trip into the village for a loaf of bread was daunting but following our partnership, I developed the confidence to travel by plane, train, boat, and taxi to locations all over the world. 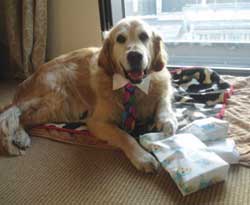 "Before my accident in November 1989, my only experience of dogs had been Ricky, a ‘Heinz 57' family pet from the RSPCA who died when I was young. Little did I know that years later, I would forge an extraordinary bond with a Golden Retriever who would lift me from the depths of despair and enable me to help others.

"I'd always enjoyed an active life, despite having knee reconstruction surgery due to a very painful bone condition. In between a demanding career as a maths teacher and lecturer, I gained my private pilot's licence and tried my hand at archery, eventually winning local tournaments and setting two national records in the disabled category. But it was while competing at a Great Britain archery squad selection weekend that my life changed forever in a split second. I was hit on the head by a discus and suffered severe brain injury, a dislocated jaw, and damage to the cervical area of my neck. After 11 months in hospital and years of rehabilitation, I was left with epilepsy, affected speech, balance, memory, mobility, confidence, concentration, and self-worth and in need of 24-hour care.

"The first two or three years after the accident are a complete blur. I felt angry and couldn't come to terms with my lost life. It was impossible to establish a daily routine and I struggled to find a reason to get up in the morning - I didn't see any point in sitting aimlessly in a wheelchair all day with nothing to do. Tears were never far away. Then, in 1994, I saw a television appeal by Dogs for the Disabled and wrote to them. After I was deemed suitable for an assistance dog, Caesar bounded into my world on December 7, 2000. The first thing that struck me was how big he was, how quickly he moved, and how much his tail wagged. But the moment he put his head and paw on my knee, I was sold!

"Our partnership grew in confidence daily and we established a night-time routine of putting out the empty milk bottles and switching the light and alarm on. Caesar would let me know if I hadn't completed a certain task and would bring me his bowl if I'd forgotten to feed him.

"Soon Caesar became much more than a fetcher and carrier and we got to the stage where we almost knew what each other was thinking.

"As I got braver, Caesar and I travelled further afield and in 2002 he became the first assistance dog to attend Wimbledon. I started to become interested in disabled access issues and in 2003 I was involved in a parliamentary briefing at Westminster and presented a pan-European survey on laws and customs associated with assistance dogs in Salzburg, Austria.

"In 2004, we went to see Princess Diana's memorial fountain. But amazingly, we were turned away because Caesar wasn't a Guide Dog. ‘Hey! Can't you see that dog's working, he's wearing a jacket!' called out an American tourist as the queue behind us lengthened. Eventually, the guard relented but I contacted my MP and within six weeks, I'd received an apology and there'd been a change of signage and policy in royal parks.

"Next we were invited to give a demonstration in Croatia and won a scholarship to attend two conferences in San Diego, California, in 2006. During this trip, we were invited to the US senate, visited senator Ted Kennedy's office, and Caesar got to play with his dogs on the lawn of the Capitol.

"Then in 2008, it was a privilege to carry the torch for the Beijing Olympics across London Bridge - with Caesar at my side. 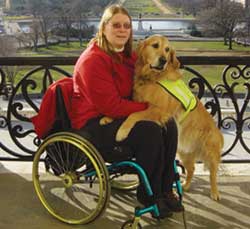 "Altogether, the two of us visited the US senate in Washington twice, the UK parliament three times, and the EU parliament once, where Caesar successfully charmed everyone in the room while I gave the keynote speech at European Pet Night in 2009. Not long after Caesar had come to live with me, he started to pace and scratch at the door whenever I felt ill. I realised that he was alerting me to epileptic seizures, enabling me to take medication and get into a safe environment in advance.

"About two and a half years before he passed away, Caesar started to exhibit this same alerting behaviour towards a close friend, Karen, a sufferer of Addison's disease, who came to live with us. Eventually, Karen approached Cancer & Bio Detection Dogs to ask if they could train a medical alert dog for her. They had never heard of this but did some research and agreed, on the basis that Caesar was already doing it.

"If nothing else, alerting and inspiring a whole new type of medical alert dog must surely be Caesar's legacy.

"Caesar also helped look after my father, who'd come to live with me when he became very ill. Although Dad had been given three months to live, he survived another nine years and throughout that time, Caesar diligently fetched and carried for him, and would check on him every single morning.

"It was heartbreaking to see Caesar realise that Dad had died. My special dog was a tremendous comfort in the days that followed, his long golden coat soaking up no manner of tears.

"Little did I know that just 12 weeks later, Caesar would be gone too - he died of hemangiosarcoma, a highly malignant tumour of the blood system.

"I used to call Caesar my Velcro dog because we were so very attached. He gave me a life I never dared hope for and I miss him more than words can say. I hope my next dog and I will be as well suited."