More than meets the eye - visiting a litter

It's so exciting planning to get your new puppy, and when - at last - the time comes to visit some litters, it's almost unbearable. Inevitably, there will be advice coming your way from all directions, including a lot of received wisdom that could put you off what is in fact a really good litter.

Given with the best of intentions, much of this has become entrenched into an ‘everyone knows' type of doggy mythology, which, while having some truth in it, shouldn't be seen as gospel. Here we take a closer look at those oft-repeated phrases and see how to pick out what you really need to know.

Don't get a puppy from a litter kept outside

If all breeders had big houses, it would be possible to sacrifice one room, preferably with a door leading directly outside, for the litter - but in the real world, not everyone has the space.

A little dog with a small litter of two or three puppies might be able to stay indoors, but large breeds with high numbers of puppies simply can't be kept in the average house once they start to get mobile. Puppies reared in a kennel and run, or a barn, have not necessarily been neglected.

Most good breeders keep puppies indoors for the first three weeks or so, and then they go outside into a safe area so that they have more space to romp about. As long as they enjoy plenty of socialising and stimuli, and their surroundings are clean, the outdoor litter is perfectly well raised.

However, if the pups have been shut away and not received anything other than basic care, indoors or outside, they will not be ideal to buy because they will have lacked essential socialisation and life experiences. 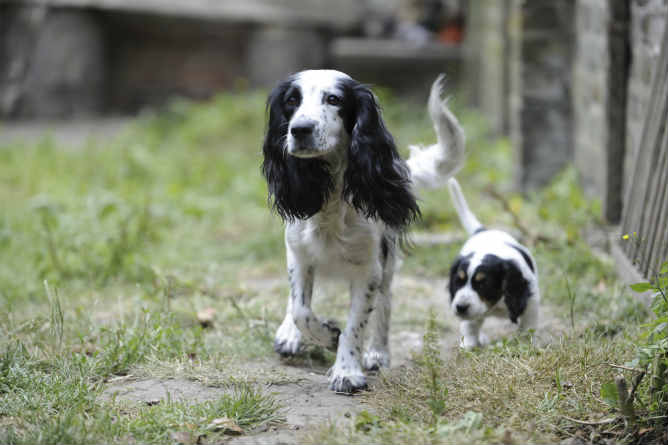 Always see the puppies with their mother

You do need to see the puppies' mother, and be sure that she is genuinely the mother of that litter. However, sometimes unscrupulous people buy in puppies to sell on, and the mother you are shown is nothing to do with them. Seeing the real mother will show you how the puppies should look as adults, although remember that the father will contribute 50 per cent of each puppy's genes as well.

The truth is, that by the time puppies are ready for potential owners to visit at six to eight weeks old, their mother won't want very much to do with them, due to the natural process of weaning them off ready for their new homes. When she does visit her litter, which, by choice, may only be a couple of times a day, they will still want to suckle. Given that they are now equipped with sharp teeth and nails, they may make her seem cross and growly - especially with a big litter.

If you visit while the litter is still very young, up to five weeks old, the dam will be full of protective hormones that may make her defensive. Some bitches are quite happy to have strangers look at their pups, while others can be very puppy proud and get quite distressed. Some of these will snarl and growl at people approaching their puppies, or even try to drive them away from the litter, if they aren't separated for your visit. This doesn't mean that the bitch has a bad temperament, as some of the sweetest bitches can be very protective of their young.

So yes, you do need to see the bitch, and obviously you need to spend plenty of time with the litter. But if the breeder shows the mother and pups to you separately, and then, when you've left the litter, lets the mother in with them so you can see that she is their real mother, it doesn't mean that there is anything wrong. Instead, you are seeing a good breeder who is considerate of the bitch's needs as well as yours.

Some advisers say you should see the puppies' father as well. If the breeder owns both, this is easy to do, but if the stud dog lives elsewhere, you may have to be content with seeing photographs or film footage. Don't expect to see the male dog with the puppies; while some get very involved with the litters they sire, others will be kept away by the bitch. It isn't unusual for bitches to keep all adult dogs away from their puppies, and many don't want anything to do with them anyway.

Choose the first puppy that comes up to you

If you like a bold dog, this is the one to choose - but bold dogs don't fit in with everyone, and the pup needs to live with you and any other dogs you have.

Normally a well-socialised litter comes bundling up to investigate, has a good bounce around you, and then the pups potter off to do puppy things together. One puppy may stay behind to interact with you on its own, and this is the one who has chosen you. So it isn't the first puppy to approach, but rather the last one to leave, which is the one for you. And if that isn't the one you like, then choose the one you prefer instead.

Often, the breeder will direct you towards a puppy who they think will fit in best with your family - which is always worth considering as good breeders spend a lot of time with their puppies and know them well.

Be wary of the shy pup

Pups who appear to be shy, sit apart from the rest of the litter, and observe you closely, tend to be thinkers and so are the more intelligent litter members. This can be the perfect dog for someone who wants a close one-to-one bond and is ready and able to develop it, but not so suitable for a big noisy family.

Often if some of the other pups are more ebullient, and go to their new homes first, the so-called shy pup can blossom and show its true character once they have gone. Thinkers can be rather demanding to train, but are wonderful dogs for the right owner. So, yes - if such a dog isn't your type, don't buy it, but don't dismiss the shy pup if you like and can manage a clever dog.

However, if a pup runs and hides, cowers, and appears frightened of human contact, this is likely to be a difficult customer to raise, and better avoided unless you relish a project and are confident of your skills.

Do temperament tests on the puppy

Some years ago, scientists devised a series of temperament tests which allegedly showed puppy character. Most of these tests were confrontational and could really upset some puppies, especially those of the more sensitive breeds. If a series of potential owners tried to conduct these tests on the same litter, the puppies might easily suffer emotional damage.

What might seem a great idea in a laboratory often doesn't translate well to the outside world. Frankly, any good breeder knows their puppies' characters inside out by the time they are ready for new homes, and most potential buyers would be shown the door if they started to manhandle the puppies in the way the experiments recommend. 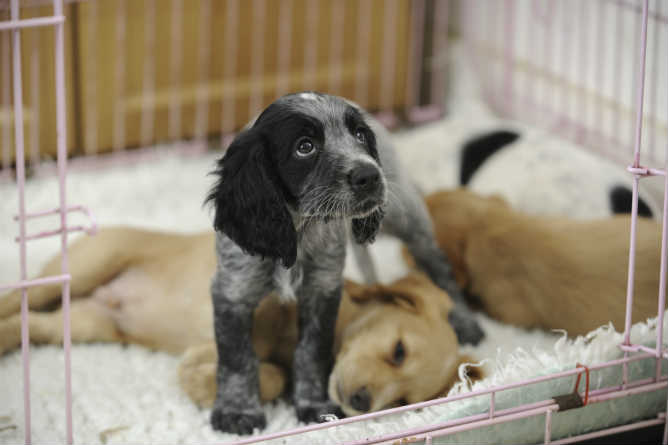 Refuse any puppy who doesn't like being picked up

Are you kidding? It's really scary for puppies to be picked up. There are times when puppies have to be picked up, such as for worming and nail trimming, but they should be placed on a table while this is being done. To be hoisted into the air right up to a big, starry-eyed, grinning human face can be very upsetting to a puppy. I get people to sit down and cuddle the puppy at its own level. Puppies can be very wriggly, and I don't want one dropped. It is seldom necessary to pick up a puppy, and they are entitled not to like it.

The last puppy isn't necessarily a dud who everyone else has refused. There has to be a last puppy, and different puppies in the litter suit different households and owner personalities. The last one in a good litter might be better than the whole of a less good litter. If you like the last puppy, and it likes you, don't be put off by all the other puppies having been chosen first.

So you see, while all these popular ideas have their roots in common sense, they should not be taken as rigid instructions to be obeyed implicitly. By choosing a good breeder, you know the puppies will be from good stock and well raised, so all you have to do is choose the one you like best.