Man sentenced to 19 weeks in prison and lifetime disqualification after 170 animals were found living in cramped, filthy conditions

Surrey Police executed a warrant at a farm in Ripley, Surrey, on 9 January 2019 as part of an RSPCA-led investigation into concerns for the welfare of horses at the site. Guildford Borough Council, Bucks and Surrey Trading Standards, Bransby Horses, Redwings, The Horse Trust, The Donkey Sanctuary, World Horse Welfare, Dogs Trust and a number of vets assisted on the day.

This week, a man was jailed at Guildford Crown Court for causing unnecessary suffering to two horses and one goat, and failing to meet the needs of 171 animals including 131 horses, 33 dogs, two alpacas and five birds.

Rescuers who arrived at the scene discovered two starving ponies, suffering from cyathostominosis (a disease caused by parasites) in one pen and a goat collapsed in another. In court, their owner admitted to failing to provide them with enough nutritious food or seek vet treatment for them. Sadly, all three animals were put to sleep at the scene on the advice of vets to prevent them from further suffering.

Huge herds of ponies, many riddled with worms, were living out in fields with hazardous metal and broken fencing sticking up from the thick mud. Inside two barns were pens full with donkeys, goats, alpacas and ponies; many of them standing on top of 2ft-3ft of months worth of waste and faeces. Many were skinny and had underlying health conditions.

Dozens of dogs - some heavily pregnant and others with tiny puppies in tow - were found chained and tethered on the filthy yard, while others were shut inside tiny cramped cages or makeshift kennels.

The owner admitted to animal welfare charges including causing unnecessary suffering to two collapsed ponies and one collapsed goat, and not meeting the needs of more than 100 others by failing to provide:

He also pleaded guilty to a number of charges in relation to disposal of animal by-products after bones and skeletons were also found at the farm, buried among muck or wrapped in rugs.

A total of 204 animals were discovered at the site. While three were sadly put to sleep at the scene, the rest (201) were taken for appropriate care, including 129 horses and donkeys, 59 dogs, three alpacas, five goats, four chickens and one duck. Some of the sickest animals received immediate veterinary care while others were taken for treatment nearby, and those that were considered fit to travel by on-site vets were transferred to Bransby Horses, Redwings, The Horse Trust, The Donkey Sanctuary, World Horse Welfare and RSPCA centres for care and rehabilitation.

RSPCA Special Operations Unit case officer Kirsty Withnall - who coordinated the huge rescue mission and led the investigation - said: “The RSPCA and World Horse Welfare officers had received complaints about the farm and had been looking into these concerns and gathering evidence.

“This was a huge multi-agency rescue mission which was the culmination of weeks of planning and evidence gathering. In total, there were 100 staff from different agencies working on the case to help round up the animals. It took almost 12 hours on the day to assess all of the animals, load them into horse boxes and animal ambulances, and move them off-site; making it one of the biggest coordinated rescue missions the UK has ever seen.

“We had to have a plan in place that would allow us to remove a large number of animals on the day but we hoped that wouldn’t be necessary and had no idea what action would be taken until vets were able to assess all of the animals.”

Despite urgent veterinary treatment - including from vets at one of the country’s leading equine hospitals - sadly 14 horses who were weak, emaciated, had serious worm burdens and were suffering from cyathostominosis died or were put to sleep (on veterinary advice). Despite the charities’ best efforts to save them, two dogs and one goat had to be put to sleep (on vet advice), and one chicken and one duck sadly died.

Twenty foals were born in charity care - although two were sadly stillborn - as well as six goat kids, one alpaca and nine puppies, although two sadly died shortly after birth.

Inspector Withnall added: “The reason I do my job is because I care passionately about animals and I’ll be overjoyed when all of these animals are in loving homes being given the care, love and attention they deserve.” 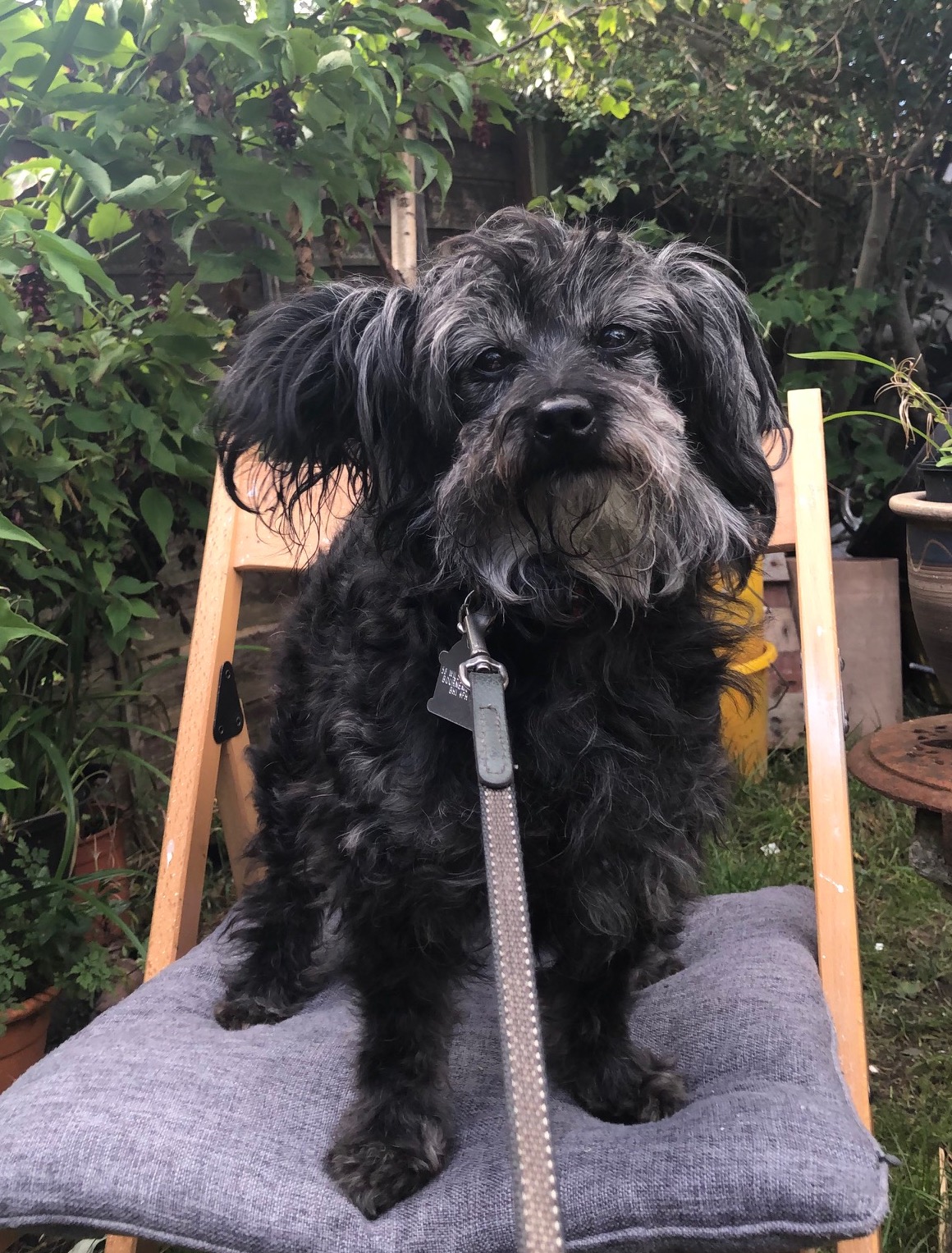 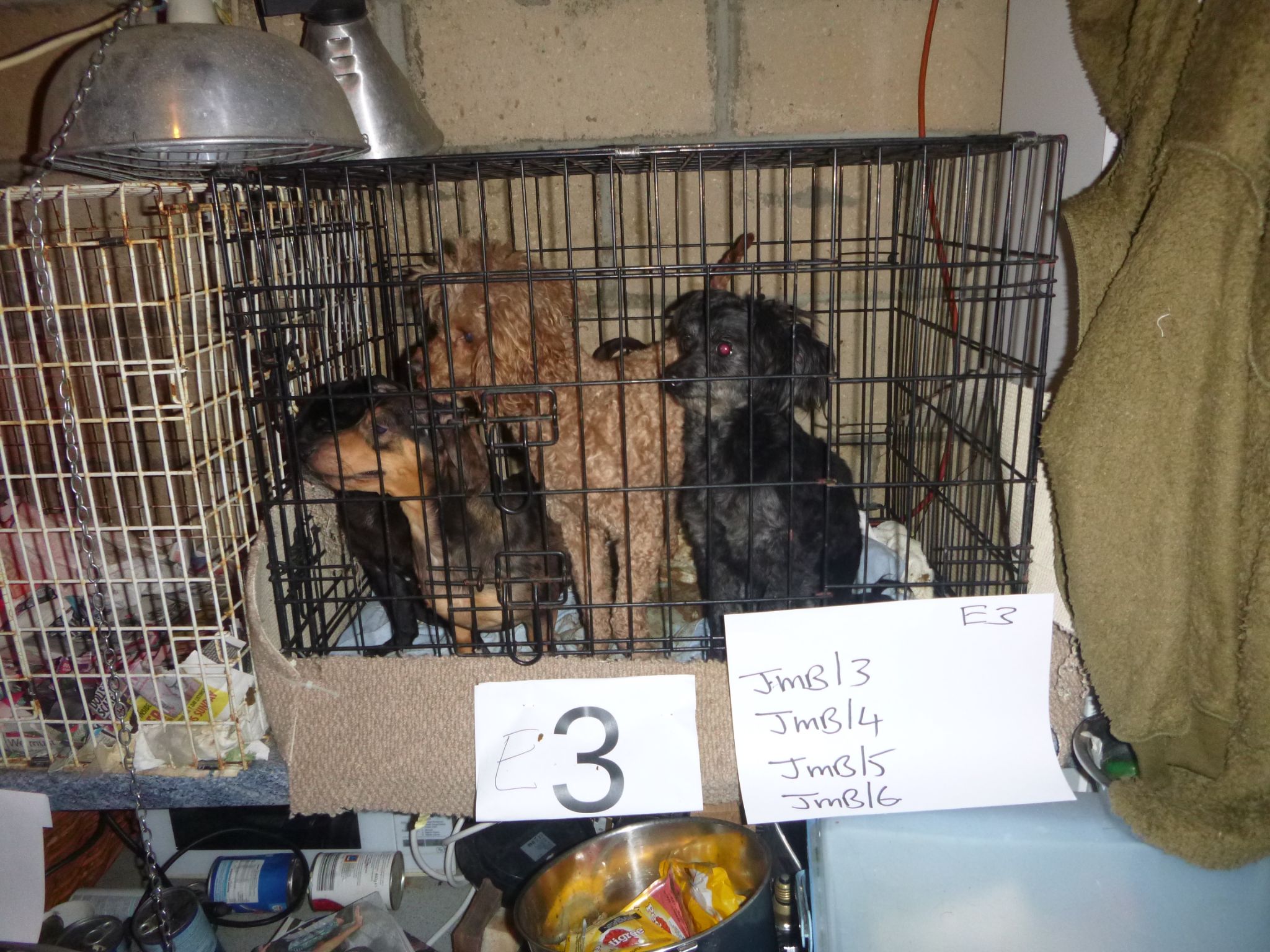 Poodle Edwina - or Winnie - was found in a tiny crate with three other dogs (pictured). She was taken in by an RSPCA fosterer before being adopted by Gigi*, from Dorset, earlier this year. The 10-year-old poodle has settled into her new home well.

Gigi, who’d lost her cat the previous year and was missing having a four-legged companion, said: “I waited so long for Winnie and I’m so pleased to have her. She’s very cheeky; she’s really come out of her shell.

“She’s gorgeous and absolutely adorable; it’s really lovely to have her. She’s such a friendly soul.

“She enjoys going to the park, she loves to sniff and absolutely loves rubbish bins! She has a bed in my bedroom and a bed in the lounge, but most of the time she’s snuggling with me on the sofa or sleeping in my bed with me!”

Colorado was also living in a large herd in the muddy, metal-strewn paddock. Aqua (pictured, before and now) and Ferriby were found in the filthy, cramped barn. Now the trio are enjoying life at one of the country’s leading equine colleges.

The College's equine centre manager said: “Aqua, Colorado and Ferriby (also pictured below) are doing really well. Aqua and Colorado are working under saddle and Ferriby is out in the field enjoying time with the other horses. The students and staff love them; they’re just lovely ponies. We’re really hopeful that they’ll be happy here and our students are able to work with them to support their study on our courses. 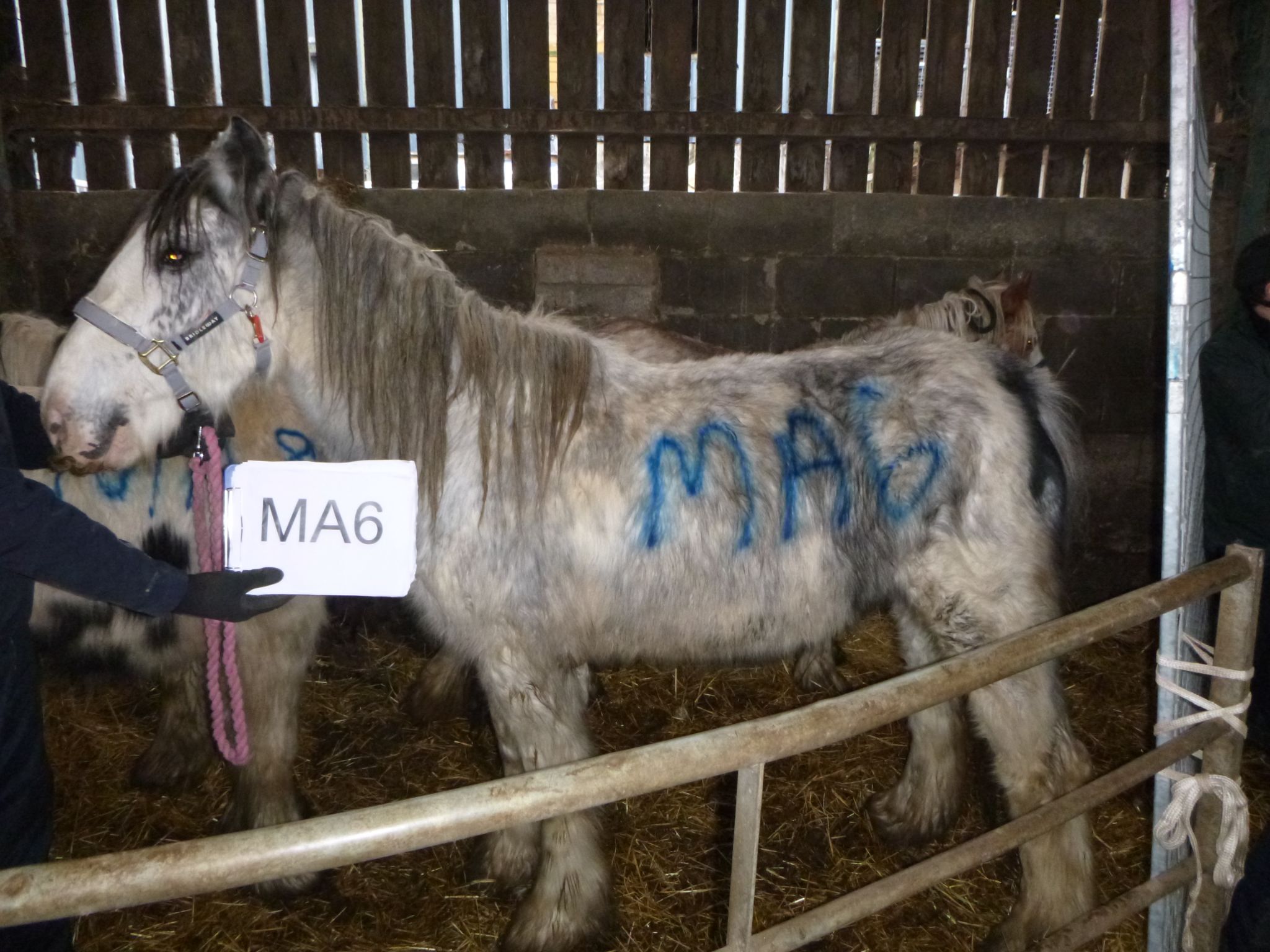 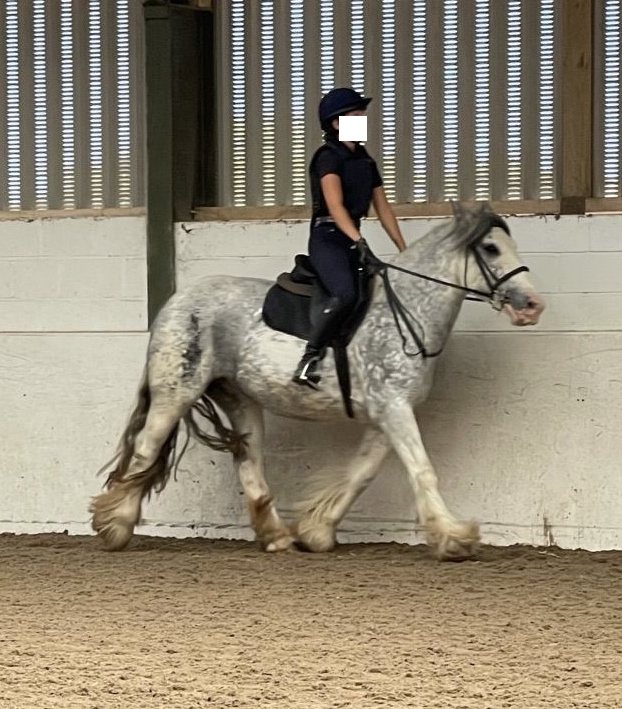 “It’s lovely to be able to give something back, give the ponies a chance and support the RSPCA. I hope we can help them to go full-circle; from the unfortunate experience they’ve had, to us rehabilitating and developing them so they can go on to train and develop our students.”

‘A second chance at happiness’

PC Hollie Iribar from Surrey Police said: “As a Rural and Wildlife Crime Officer for Surrey Police, I have witnessed some devastating acts of animal cruelty over the years. This was one of the most difficult cases I’ve seen, and I am grateful to the RSPCA and our other partner agencies for the hard work put in to bring this case to trial.

“I’m very glad that this heartbreaking case has seen a resolution in the courts, and that the animals involved were rescued and given a second chance at a happy and healthy life.”

A spokesperson from World Horse Welfare said: “This was a challenging case but the teamwork between the charities and agencies when rescuing the animals was outstanding. We are relieved that we were able to help remove so many horses from these conditions so they could have a better life and receive the care they deserve.” 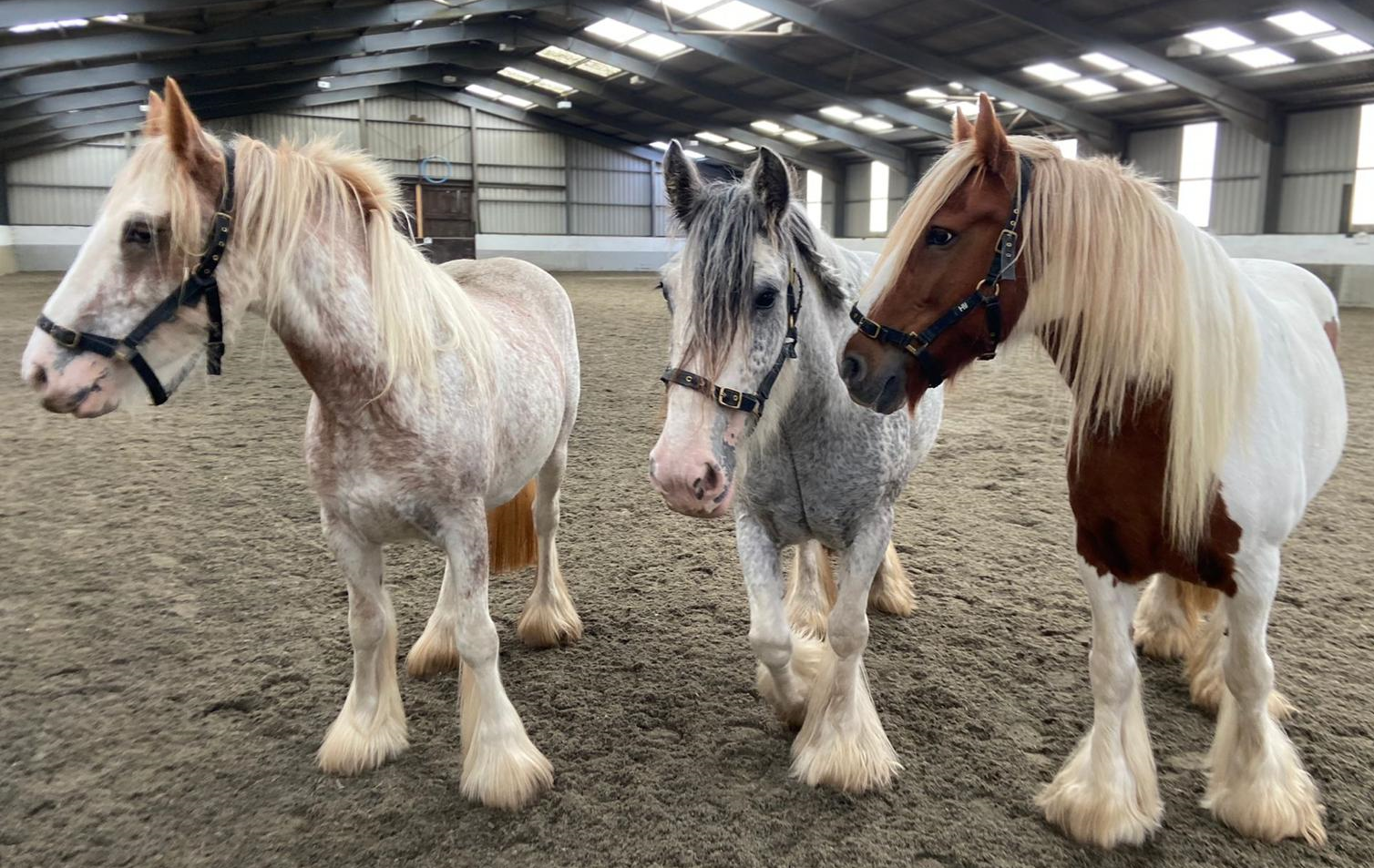 On Friday (15 October), Geoffrey John Bennett (DoB: 30/12/53) of Portsmouth Road, Ripley, was jailed for 19 weeks and disqualified from keeping all animals (including keeping, participating in the keeping of and dealing) for life having previously pleaded guilty to a number of offences** including two Animal Welfare Act offences relating to 131 horses, 33 dogs, two alpacas and five birds, as well as six offences of failing to dispose of animal by-products.

Sentencing Bennett, the court recorder took into account his guilty plea, age and health problems, but noted the severity of the offences and felt only an immediate jail term was appropriate. The judge also ordered that he receive 12 months supervision on release from prison.

He said: “They will show you responsibility and care [in prison] many times greater than you showed the animals in your care.”