It’s good to be back! The greatest show on earth is back in town — and we can’t wait, says Andrea McHugh!

It’s been a long two years, but Crufts 2022, the biggest and best dog show in the world, is almost here!

Your Dog caught up with a few people who have been counting down the days until the Kennel Club once again welcomes thousands of dogs, handlers, spectators, and exhibitors back to the NEC in Birmingham.

Radzi Chinyanganya has been a roaming reporter for Channel 4’s TV coverage of Crufts for four years, co-presenting the show with Clare Balding.

“Crufts is a wonderful four days,” said Radzi. “It really is magical, and in 2020 there were 27,000 dogs in action! Although I really like dogs, I’m no expert, so I’m genuinely interested in asking the questions that viewers want answers to.

“People love to see dogs competing or representing charities, but it’s great to shine a light on the stories behind these dogs and their owners. The way that dogs transform people’s lives is just so inspirational. Some people are facing enormous challenges and dogs help them to live a normal life, which is just mind-blowing.

“This year you will see me running around the show doing a mixture of stories, features, and 101 other things!

“I will be working with Clare Balding again, who is fantastic and one of the best sports presenters of all time. She is not just personable, warm, and lovely, but to stand next to her when she is presenting and in full flow is amazing. I learn so much and it’s a privilege to work with her.” 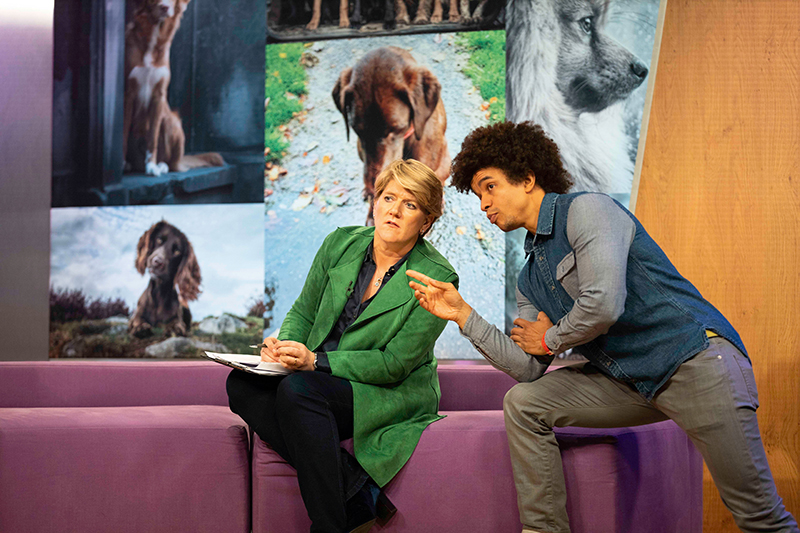 In March 2020 the Best in Show title went to two-year-old Wire-haired Dachshund Maisie, who belongs to Kim McCalmont, from Gloucestershire. Just days later the country was plunged into lockdown.

“My husband, Duncan, and I still pinch ourselves that Maisie won Best in Show,” said Kim, who is head teacher of a primary school. “She took the crown, and two years later is still wearing it! She absolutely loves going to shows and strutting her stuff, and it was such a shame that lockdown happened, as she didn’t get a chance to do all the things that normally happen after winning Crufts.

“Maisie is very special to me, as she was hand-reared after her mum sadly died, so there is a very special bond between us.

“I’ve been going to Crufts for over 40 years. It really is the best dog show in the world, and to win Best in Show was the best feeling ever. We often watch the YouTube video of Maisie winning — in fact that was our entertainment on New Year’s Eve!

“I love Wire-haired Dachshunds because they are so bright and naughty, and up for anything — particularly Maisie!

“This year Crufts have invited Maisie and I to attend on Hounds day to do a lap of honour, which will be lovely. She will certainly enjoy being in the spotlight again. I might also compete with another young dog, as well as Maisie’s brother. I’ve already chosen my outfit!”

Not only is Crufts the world’s premier event to celebrate pedigree dogs in action, it’s also the place to see the nation’s favourite cross-breed crowned Scruffts champion 2022. All the dogs have qualified at heats around the country and the grand finale, which is sponsored by James Wellbeloved, can be seen in the main Crufts arena.

Louise Jacobs, from Colchester in Essex, has qualified for the Scruffts final in the Golden Oldie category with her 10-year-old dog, Teddy.
“I can’t wait for Crufts!” said Louise. “I was so disappointed when it was cancelled and like many people, I resorted to watching old YouTube videos so I could get my Crufts fix!

“Teddy’s mother was a Lhasa Apso X Yorkshire Terrier and his dad was a Bichon Frise. I’ve had him ever since he was a puppy and he qualified for the final in November 2021 at Discover Dogs. He was also one of four finalists in the Friends for Life competition in 2016, and I’m incredibly proud of that achievement, as thousands of dogs entered, and he deserved the recognition for helping me overcome a lot of problems.