I owe my dog my life and my career 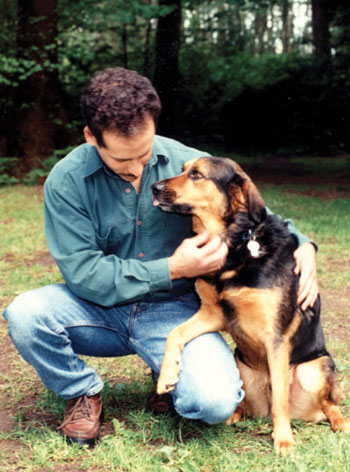 "Oh Steve, you can't ignore a face like that! Just look into that dog's eyes; he's a man in a dog suit!'

"Nancy, my then girlfriend, kept urging me to look into the eyes of an emaciated feral Rottweiler X German Shepherd puppy just yards from us. Underneath the matted fur, hundreds of ticks, thousands of fleas, protruding ribs, and nasty-looking infected neck wound, I knew there was a canine Antonio Banderas or Al Pacino trying to get out. Something drew me to him and, as a test, I let out a shrill whistle. Unexpectedly, he stopped and looked back at me.

"Our eyes locked and before I knew it, this gangly puppy came running towards me like a cartoon dog. There was no getting away from it - the connection had been made and our lives would never be the same again.

"Looking back to that cold December day in 1989, it must have been fate that Nancy and I were driving along Highway 101, a coastal route through Mendocino County in northern California, for a week's vacation. To pass at that moment a group of dogs containing one with such a high level of intelligence and character was quite simply a shot in the dark. I'd wanted a dog ever since I was a kid growing up on a diet of Lassie films, but I lived in a one-bedroom New York tenement with my parents and brother and it wasn't an option. Although I was thinking about having a dog sometime soon, this wasn't the way I'd planned it.

"As we bundled my first dog into the back of the car, I eyed the puppy's father with trepidation - a 150lb Rottie bred solely to guard the area's illicit marijuana groves - as he gnawed on the snout of a road kill deer. Although I was drawn to this pup, I questioned whether I'd done the right thing and knew that the coming weeks and months would be a trial.

"A local vet sutured the dog's neck wound, treated him for fleas and ticks, wormed and vaccinated him, and gave me antibiotics, a lead, and a collar. With the vet's words: ‘He'll be a darned good dog - just be patient' ringing in my ears, I headed home to Los Angeles, having made the biggest decision of my life.

"It didn't take long to discover that the dog - who I'd named Lou - suffered from serious separation anxiety and a propensity to go through doors, without them being opened first. Lou was a doggy demolition expert and ate countless prized possessions and household necessities, including three TV remote controls, binoculars, a computer mouse and keyboard, and Ray-Ban sunglasses.

"House-training was a nightmare and there was always some foul deposit to clean up in the morning. One day, I left the house for five minutes to buy a beer and when I returned, it looked like the Third World War had hit. Somehow Lou had managed to rip up the carpet, remove a door from its hinges, and leap through the closed kitchen window. I was glad I had a beer in my hand at the time.

"After phoning a friend for his blunt advice (‘buy a crate, beef brain') and hiring two dog trainers, I pledged to go it alone and train Lou myself. By now, he'd bonded to me like iron and I started to resolve his issues by taking him to work with me. We became inseparable and I learned by trial and error, by reading countless books, and by working on Lou's recall at the beach, with strips of turkey meat never far away.

"Lou grew into a strong, sleek, and handsome dog. He won hearts with his intelligence and character, but the wild dog always lurked deep inside. When he was stolen from outside my local cafe, he changed into a creature from the third circle of hell. With a blood-curdling snarl, he threatened to dismember his two kidnappers, who dropped his lead like it was the hottest thing they'd ever touched.

"He foiled armed robbers, helped police catch a rapist, charmed babies, taught sign language to schoolchildren, and soothed the sick and elderly. But most of all, he totally changed the direction of my life. He inspired me to become a pet behaviourist and animal trainer, and helped me to clinch a job at the Academy of Canine Behaviour in Bothell, Seattle. At the interview, Lou impressed with his repertoire of commands and 100-word-plus vocabulary. It felt like an audition for ‘American Idol', but we got the job. Together, in the years to come, we rehabilitated thousands of delinquent dogs, 300 – 400 of whom were in the last chance saloon and would otherwise have been put to sleep.

"Lou helped confirm that heroic larger-than-life image I'd had of dogs since I was a kid. He was a fictional canine character come to life but I now know, after training 8,000 or 9,000 dogs, that he wasn't a normal dog.

"He taught me that dogs' potential to be with us and work with us is higher than people give them credit for. Lou was old school - he loved to work, and he showed me how much these animals need to feel purposeful. So many people today have a dog just as a companion but they have so much more in their hearts to give.

"We couldn't use textbook methods on many of the dogs we worked with as they were so damaged, but we learned from each other. Lou was the best judge of people and dogs; he was masterful at working out what a troubled dog was thinking. He saved my backside and protected my butt from countless dangerous dogs by using his athleticism and three-dimensional jumps to out-manoeuvre a dog.

"Five years after Lou died, aged 16, I can still smell him and hear his collar jingle. I owe Lou my life and my career and I think about him every day. If I could see him now, I'd say simply: ‘Thank you, bud'."