How to have a dog-friendly garden

It is possible to create a beautiful area which you can both appreciate, even though you may have very different preferences.

Your idea of a perfect garden, for example, might include a nice lawn, some colourful flowers, and maybe an interesting feature or two, such as a piece of sculpture. From your dog's point of view, these are likely to rate low on his wish list; he'll be far more delighted by places to dig, somewhere to snooze, finding interesting things to sniff at, and places to scent mark, things to scavenge and eat, and smelly stuff to roll in.

Not all these activities will be acceptable to you, but it's perfectly possible to compromise so you both feel you have the best of all possible worlds.

My mum, my dad, and my grandad were all keen gardeners, but although I appreciated the results of their labours, I just didn't share their enthusiasm.

Then when my partner and I acquired our first dog, rescue Boris - entirely unplanned - everything changed. We soon adapted to a new routine with Boris, which included early morning and late evening walks, but there was also the matter of the garden. A neglected wilderness outside the door isn't much fun for a dog, or for us either as we discovered just how brilliant long grass is for concealing piles of poo.

That was one of the first laws of gardening with a dog we discovered: take your eye off it for just one second while you fetch a poo bag, and you can guarantee that it disappears into the background and you won't find it again until you have actually trodden in it. Failure to sweep up fallen autumn leaves all adds to the fun.

Reluctantly I started a bit of much-needed maintenance. A hitherto unsuspected flower-bed was revealed in a corner, containing some sorry looking plants. Dad helped identify them and I bought a garden fork to tidy things up.

One thing led to another. Before I knew it, I was doing the previously despised gardening thing, and what's more, I was actually enjoying it. As I walked Boris, I started taking notice of features and plants in the gardens we passed, and thinking about which ones might work in our garden. Boris was enjoying the improvements and having a lot more fun out there too, especially when he discovered our neighbour's garden - which introduced us to the second law of dog-friendly gardening: make sure your fencing is secure.

When Boris was joined by a tiny three-month-old puppy called Chester, who could jump like a flea, we found that a determined escape artist can not only scale great heights, but can also squeeze through the tiniest of gaps.

With the insatiable curiosity of youth, Chester also insisted on testing everything with his teeth. While learning to be tidy in the house was easy, this posed an entirely different problem out in the garden: which plants were safe if he decided to chew on them?

Slowly we learned about what was going to work in the garden, both for us and for our dogs, partly from books, partly from my dad, who was an inexhaustible supply of advice, and quite a lot through trial and error.

The garden now is anything but a show garden, but it suits us all very well. There are flowers and shrubs for both human and canine interest; a container-grown self-service doggy salad bar; and although I do keep the main area of lawn mown to a sensible length, I allow the edges to be a bit shaggy so the dogs can graze on the longer stems.

But if you prefer a neater and more formal look there is no reason why you shouldn't succeed. I have friends with both stunning and immaculately kept gardens and dogs. Just remember to take your dog into account in your plans! 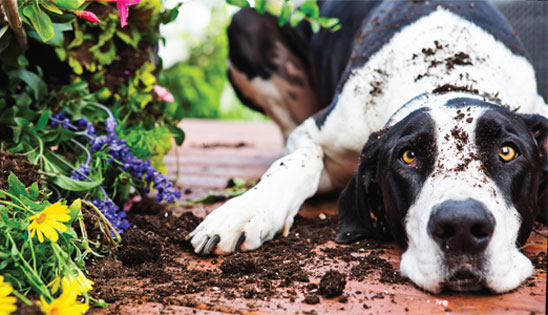 Creating a garden which satisfies the requirements of both you and your dog is largely a matter of observing a few common sense guidelines: