How to cope with your aggressive dog 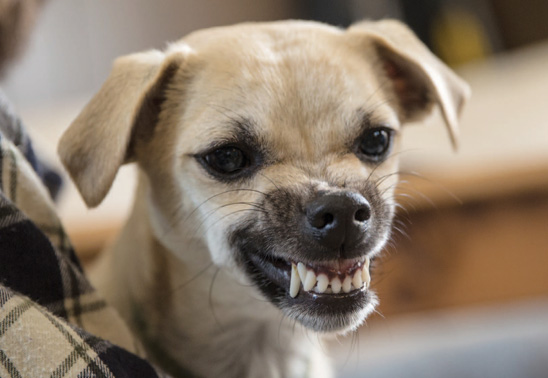 Of all behaviour problems, aggression is the one that worries dog owners the most. Trainer Carolyn Menteith and legal expert Trevor Cooper offer some advice.

Trainer Carolyn Menteith says: Dogs who are aggressive towards humans - whether strangers or family members - can prove a very real danger, as some of the recent news headlines have shown only too tragically.

If your dog is already aggressive towards people (or if you are worrying that he might be), you need to get professional help - now. Don't even fi nish this article - it won't help! You need an expert not only to deal with the aggression but also to assess your dog's safety. Owners are the very worst at assessing how dangerous their dogs might be, as they tend to either vastly under or over-estimate it!

As a matter of urgency, find someone who is skilled in working with aggression in a force-free manner and, in the meantime, it is your responsibility to make sure people are safe from your dog. Use a muzzle (at home too if he is problematic in the house), keep him on the lead when outside, and avoid circumstances in which you think aggression is likely to occur. Don't just trust to luck and hope it will be OK.

As with all behaviour problems, prevention is far more important (and far easier) than cure - the most important thing to think about is prevention along with being able to spot the warning signs before aggression starts.

We first need to stop thinking of aggression as being something that ‘dogs shouldn't do'. The reality is that it is very definitely something dogs will do - if we push them into it. Dogs have no other way to tell us that they are feeling extremely fearful, extremely uncomfortable, or, sometimes, in pain.

Actually that isn't entirely true. Dogs do have ways of telling us but we ignore them - not intentionally but because we don't speak the same language. We are a verbal species; we communicate by making sounds. By the time a dog is so uncomfortable he actually vocalises it (usually by growling), he has already (in his own mind) given us some very clear warning signs.

If we really want to stop dog bites, we have all got to get a much better understanding of a dog's language, both to stop our dogs from feeling that they have no option but to bite, and to stay safe from dogs ourselves.

Remember that behaviour is just a symptom of an emotion. A dog (or even a human - and that includes you!) does something because he feels a certain way. The emotion that drives aggression (or where most aggression has its roots) is fear - fear of strange people, fear of being handled, fear of strange situations. The other causes are generally frustration and also pain (or fear of pain). We need to stop thinking about ‘aggressive dogs' and instead think about dogs who sometimes behave in an aggressive way because of the way they are feeling.

There isn't just ‘aggression' and ‘non-aggression' and nothing in between. While there are certain breeds that show little to no arousal, and others that arouse quickly, there are always warnings.

Not all dogs show all of these, and they don't happen in the same order for every dog, but if you see any of them, your canine super-senses should kick in; the dog is starting to tell you, loudly and clearly in his way, that he isn't comfortable and he would really like you (or the situation he is in) to go away.

The early warning signs are yawning, blinking, and lip or nose licking, and turning his head away. These are very low level indicators that the dog isn't comfortable. This is all still in the realms of social politeness. However, if these signals (which the dog thinks are really quite clear) are ignored, he will move on to turning his body away and, if possible, walking away.

And at this point, most people are totally oblivious and follow him! Dogs must think we are really confrontational - because we just don't get it. The dog is saying, as politely as he can, please stop that, I don't like it, and I am beginning to feel stressed and uncomfortable.

Then we can see more obvious body language: low creeping, often with ears back, or standing crouched with the tail tucked underneath the body. The dog may go on to lie down, or lift a leg. Then we start to move on to some very strong signals and you could well be in trouble because you have let your dog down and put him in a situation with which he can't cope. These signals may include standing very still and stiffly, staring, and non-blinking. The next step is growling (see how far down the line vocalising is?) and maybe snapping. And then we get a bite. And at the point when the dog bites, in his mind he has given countless warnings and is left with no choice.

Once you know this, I guarantee you won't look at all those ‘cute' photos on Facebook, of children cuddling dogs, in the same way ever again - most of the dogs are giving clear ‘I am not comfortable' signs!

Every time there is a serious dog bite you will hear: ‘Oh, but it came with no warning'. This is never true - there are always warnings if we know how dogs communicate.

And after it has happened once, and the dog has learnt how to make the scary stuff go away, he will do it more readily the next time and probably with less warning (as he has learned you don't listen to them!).

Whenever a child is bitten, people say that parents need to supervise their children better. I think the problem is that parents don't know what they should be looking for. Many family dogs I see look uncomfortable all the time and no one is listening.

It is important that we are true guardians for our dogs and do not put them in situations where they feel they have to bite. And then, having done it once, fi nd that ‘works' to get rid of the thing that was stressing them.

If you have children, a busy house, or want a dog who is a social butterfly, you should choose your breed - and your breeder - wisely in the fi rst place.

Finding a dog who has been properly socialised (and continuing that socialisation) is key as these puppies will be used to people, to home life, to novel situations, and to being handled. Find a breeder who socialises using a recorded programme such as The Puppy Plan; visit www.thepuppyplan.com

It can be hard to locate them because there is no published list of breeders who are using the plan as yet, but hopefully this will change. New owners should begin to realise how important socialisation is for the future behaviour of a dog, especially in preventing aggression and fear, and demand it from the breeders they buy their puppies from.

Legal expert Trevor Cooper says: In England and Wales, the Dangerous Dogs Act 1991 (DDA) was recently amended by the Anti-Social Behaviour Crime & Policing Act 2014. The changes have far-reaching implications for both dog owners and those who have charge of dogs.

Under Section 3 of the Act it is a criminal offence for a dog to be "dangerously out of control in any place in England or Wales".

A dog is regarded as dangerously out of control if there is ‘reasonable apprehension' that it will injure a person or assistance dog, regardless of whether it actually does so.

There are two different forms of the offence:

The aggravated version is where the dog has injured a person or assistance dog.

The non-aggravated version is where the dog hasn't injured anyone but has still been dangerously out of control.

To constitute an aggravated offence, the injury could be caused by a tooth (bite) or a claw, or maybe even by the dog knocking the victim over. It doesn't need to be a serious injury - it could be as little as a puncture wound, a scratch or even a bruise.

Before the DDA was amended in May, there was no offence if the incident took place in a private place where the dog was permitted to be.

But this came under public scrutiny when 14-year-old Jade Anderson was killed by dogs in March 2013. At the time, Jade was inside the home of the dog's owner and so no offence was committed. That loophole has now been plugged.

However, there is a defence if the victim is a trespasser (or the defendant thought they were), and the incident takes place in a building (not the garden) which must be a place where people live (so not a shed or other outbuilding).

Even if an offence has been committed the Crown Prosecution Service will still have to decide if it's in the public interest to proceed. This will be especially relevant if the victim was in the property unlawfully and there was a degree of provocation to which the dog responded.

If found guilty of an aggravated offence, the penalties are potentially severe, and can include:

Up to three years in prison if an assistance dog is injured or dies;

An unlimited fine; unlimited compensation; discretionary disqualification from having custody of a dog; victim surcharge; and costs.

There is a presumption that the court must order the destruction of the dog unless the offender can prove that the dog "would not constitute a danger to public safety".

In deciding this the court must consider the temperament of the dog and its past behaviour, and whether the current keeper is a fi t and proper person to be in charge of the dog.

The alternative to destruction is a contingent destruction order, which states that the dog will be destroyed unless the owner keeps it under proper control, and which may specify conditions, including muzzling, keeping the dog on the lead, excluding it from specified places or, in the case of a male dog, requiring it to be neutered.

If your dog injures a person you could also fi nd yourself liable to pay civil compensation. This will depend on the particular circumstances of the incident but the kinds of thing the civil court would look at are whether the dog has dangerous characteristics you were aware of (in other words it has acted in a similar fashion before) or whether you were negligent - was there something you did that you should not have done, or did you fail to do something that you should have done?

The law in this area is quite complicated, so if you have third party liability insurance you should notify your insurers as soon as you are aware of a potential claim and then leave it to them to decide if there is liability.

If you have pet health-care insurance the chances are that you are covered but do check the wording of your particular policy. Otherwise, if you have contents insurance for your home you may have cover there but, again, check.