Practise yoga with your dog and find your inner dogi 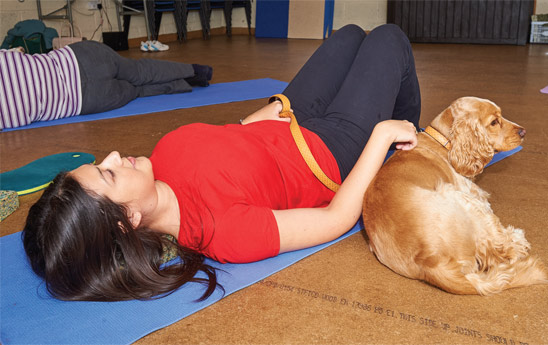 Yoga with dogs is fast becoming popular in the UK. Kelly Felstead gives it a go with her Cocker Spaniel Henry.

If you've heard that dogs can take part in yoga sessions and wondered how, you're not alone!

That was my first thought when I arrived for an hour of doga - yoga with your dog - with my spaniel Henry. I'd always been keen to give yoga a try but never imagined I'd be doing it with a dog!

Humans who practise yoga are called either yogi (male) or yogini (female); the canine equivalent is a dogi or dogini.

Doga is described as a type of ‘partner yoga', involving an owner and their dog. There are certain yoga poses dogs can get involved in, and canine participants can also be used as weights or props, depending on their size.

Henry and I joined a doga class run by yoga teacher Jane Russell, who's been doing it for 10 years. She's been taking doga classes at a dog training and boarding centre near Worcester since September.

I wasn't sure what to expect and had visions of toy breeds balancing on people's shoulders. Our class included three other owners and their dogs - a Border Terrier, a small cross-breed, and, surprisingly, a rather large Greyhound-cross.

Jane played soothing music and told everyone to sit on a yoga mat. There were yoga blocks for people to sit or kneel on if they preferred.

The dogs remained on their leads and sat or lay next to their owners - except Henry, who seemed perturbed at the lack of activity in the room.

We started by focusing on our breathing; breathing in and out and clearing our minds so we became aware of how we were breathing and our posture.

This was followed by some head turns and shoulder lifts to release tightness and tension, while concentrating on breathing deeply in and out.

With one hand holding Henry's lead - to make sure he didn't disturb the rest of the class - it was difficult to focus on what I was doing as Henry kept trying to sniff our neighbour. Working around our dogs, who were lying on the floor, we did some side bends, lifting our arms up in the air and bringing them down again to open up the side ribs.

A balancing pose called the boat was next, and here the dogs were able to get involved too. Sitting down with our legs bent, we put our feet fl at on the fl oor, and then had to lift the lower legs up. Those with a smallish dog could hold the animal in their lap against their chest; bigger dogs could remain by their owner's side while they moved around them. Henry wasn't keen on participating, so I attempted the moves without him.

The poses that followed included the cat - kneeling on all fours over the dog - which creates movement through the spine, and leg lunges which involved stepping forwards and raising and lowering the arms.

Canine massage plays a part in Jane's doga classes. We got the dogs to sit or lie down on the mat and lightly ran our fingers from the shoulders to the base of the tail, using soft and gentle touches. We massaged the pads of the feet and flexed the joints in the paws. By this point, the other dogs were ready for bed, but Henry still had far too much energy.

"I incorporate canine massage into the classes," explained Jane. "Doga is about being aware of your dog's reaction all the time. You get to sense if they are not enjoying it or showing signs of pain.

"The massage is about increasing circulation to an area and puts the dog at ease. It's relaxing to do and is a chance for you to notice any hot spots, lumps, or bumps. It also gets dogs used to being touched more."

The next move was an exaggerated walk on the spot, lifting the heel and pushing down, while lifting and circling the shoulders. This was followed by a wide leg stretch. With this pose, we made contact with our dogs as we hinged from the hips and reached down to touch their fur.

The class ended with a pose known as balancing of the tree, and a soft spinal roll down to release and relax the spine.

As this was our first class I didn't expect Henry to get doga straight away. Throughout the class, he was more interested in pulling on his lead to investigate the other dogs.

As a young and active gun dog breed, Henry has always enjoyed activities that are physically stimulating, so I think I may stick to doing yoga solo next time!

(Q) What are the benefits of doga?

(A) The overall aim is to bond and relax with your dog. Doga can help to calm dogs and make them happier. For owners, doga allows them to forget about things and spend time with their dog, relax, and de-stress.

"At the start of the class I always get people to concentrate on breathing awareness as it helps to sort the mind out, "said Jane. "Dogs will pick up on the fact that their owner is relaxing and feed off their emotions."

(Q) Is it suitable for all dogs?

(A) Jane said that doga was open to dogs of all sizes and ages, including elderly and large breeds. Dogs can get involved in poses in different ways, depending on their size.

"When doing research, I read that it took six or seven sessions for dogs to get used to doga, but some dogs seem to take to it very early on - it depends on the dog and owner," said Jane.

"With doga, you are trying to involve the dog but also work around them, so you could have all the dogs doing different things - one could be standing and another sitting. Some things are easier with smaller dogs, while other poses are easier with larger dogs."

(Q) Is it expensive?

(A) No. Jane's doga class costs £7.50 for an hour's session. She has yoga mats and props which people can borrow. Doga classes run by other instructors will vary in cost. There are a number of inexpensive books available that give an introduction to doga.

Try it at home

Jane recommended the wide leg stretch as a simple yoga pose people could try at home. It helps to release tension.

Stand with your legs wide apart. Inhale, lengthening your upper body through the spine.

As you breathe out, hinge from the hips, reaching your hands down towards your dog, who can either be standing or lying in front of you. Keep your knees soft.

While maintaining contact with your dog, sweep one arm out to the side to a comfortable level, leading with the back of the hand. Exhale to bring the arm down. Repeat several times and change arms.