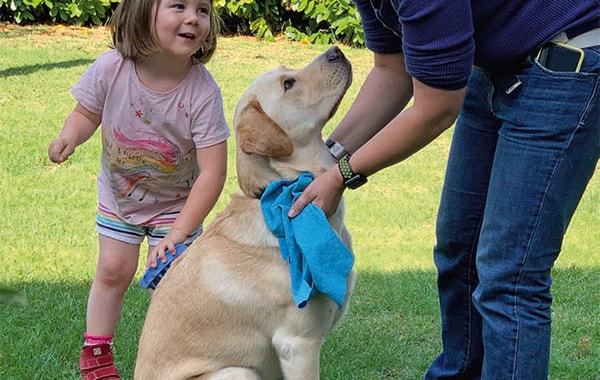 Despite being bitten as a child, Invictus Games medallist Kelly Ganfield has overcome her fear and forged an amazing relationship with two dogs. Joanne Bednall reports.

It’s fair to say I didn’t like dogs whatsoever,” stated Kelly Ganfield categorically when asked if she had any pets while growing up. “Apparently, my parents had a white Boxer when I was a child and I didn’t get on with it.”

But probably the final straw for the now 39-year-old was being bitten on her lip and chin by a German Shepherd when she was seven or eight — and she still bears the scar.

In 2009, though, Kelly’s life was to change forever when she met her wife-to-be, Sarah, a massive dog lover.

“Sarah wanted a dog but I was adamant that it was never going to happen,” said Kelly, who lives in Trowbridge, Wiltshire.

“She kept pestering me, asking for a Jack Russell puppy, but I held firm.”

Aside from her extreme fear, Kelly had another good reason for not wanting a dog — her health.

After joining the Army as a military clerk aged 18, officers thought she looked unwell one August day in 2001, so sent her to the medical centre. There, Kelly collapsed and, when she came round, found herself in intensive care.

“Just as my battalion left for Iraq, I was lying in the hospital,” continued Kelly, who previously served three-and-a-half years in Northern Ireland, and enjoyed playing football for the British Army and Combined Services, as well as Chester FC Women’s team.

“I was devastated — travelling the world and serving my country was all I’d ever wanted to do. I felt cheated and it still haunts me to this day.”

For the following two years, Kelly was in and out of hospital while medics tried to explain her symptoms. Eventually, she was diagnosed with antiphospholid syndrome, a condition of the immune system that causes blood to clot excessively. It triggered two strokes, which have affected Kelly’s memory, learning capacity, decision-making, and time-keeping; Raynaud’s phenomenon; epilepsy and a severe vision impairment in both eyes.

After being discharged from hospital and the Army in 2005, Kelly found it hard to adapt. She missed the military and playing sport, and struggled to cope with her failing health and vision.

“The best way to describe my sight loss is that it’s like looking through the wrong end of a pair of binoculars, so I basically have a pinhole of vision in both eyes,” explained Kelly, whose lowest point was not recognising her own reflection in a mirror. “I broke down and didn’t want to be here anymore — I felt so alone.”

Although the turning point came when she met Sarah — the first person who made her feel normal and worthy — Kelly was determined not to cave in to her partner’s requests for a dog. “The last thing I wanted was a yappy Jack Russell who I was afraid of and likely to trip over because I was nearly blind,” she continued.

“But Sarah kept chipping away at me so to shut her up, I agreed to go and view a litter of 10 Labrador puppies bred by a gundog trainer in Devon.

“As soon as Sarah said: ‘Oh Kelly, look at that little one…’ I knew we would be going back. I took the breeder aside, confessing I was scared stiff and wanted the right dog. But Edi — the runt of the litter with a crooked tail — chose us.”

With Sarah at work all day and a puppy to care for, Kelly had no choice but to face her fear head-on. “Before, I’d been lonely in the house on my own, counting down the hours until Sarah came home. But now I had a responsibility, training and walking Edi, and we soon developed a bond.”

Remembering how upset her grandmother had been at having to give up her dog when she went into a home, Kelly was inspired to train Edi as a Pets As Therapy (PAT) dog. The pair caught the bus to various residential homes in Plymouth, meeting many new faces in different surroundings.

“Everyone loved Edi,” recalled Kelly. “I had the best tool for doing something positive for society — it made me feel good. Edi not only cured my fear of dogs but became my best friend.”

Bolstered by Sarah and Edi, Kelly’s confidence grew and she found the psychological and physical strength to complete two half marathons, the London Marathon, and a 200-mile walk between two volcanoes in Iceland.

In 2014, while watching TV coverage of the first Invictus Games in London, Sarah turned to Kelly and said: “You could do that.”

“At first, I took it as a joke,” said Kelly, who was inspired to apply for selection for the 2017 Toronto Invictus Games, the multi-sport event for wounded, injured, or sick armed forces personnel and veterans.

At the first training camp at Loughborough University, Kelly arrived to see servicemen with missing limbs and even a triple amputee. Thinking that she didn’t deserve to be there because her disabilities were invisible, she turned to go, but an official convinced her to stay and train. At the selection trials at Bath University, Kelly was chosen to compete in indoor rowing, the 100m, and 200m.

“Toronto was an amazing experience,” reflected Kelly, the only visually impaired female competitor in her events, in which she achieved three personal bests.

She followed this up with selection for the 2018 Sydney Invictus Games, winning silver in the 4x100m relay — the first visually impaired athlete to win a medal in this event, and the only visually impaired competitor out of 500 entrants.

“I didn’t go there for a medal,” continued Kelly. “I went to show my four-year-old daughter, Bethany, that nothing has to stop you in life — if you really want to do something, you will.”

In fact, it was Kelly’s determination to walk Bethany, who has cerebral palsy, to school that first made her consider having a guide dog. 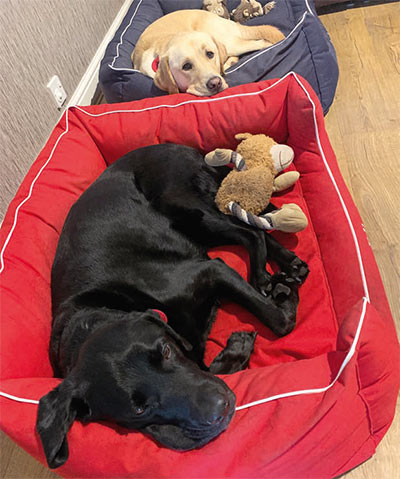 “I thought I coped well enough with a cane and that having a guide dog would betray Edi,” said Kelly, who was convinced otherwise by Sarah. After applying, being assessed, and placed on the waiting list, Kelly received a call about a suitable guide dog in April 2019.

Two-year-old Archie came for a trial sleepover, but although he got on well with Edi, who’s now nine, Kelly had mixed feelings. “I wasn’t sure if I should treat Archie the same as Edi,” said Kelly, who went on to train for eight weeks with the Labrador X Golden Retriever.

“It was hard work, particularly walking from one kerb to another as I found depth perception difficult.”

But despite her initial misgivings, Kelly has no regrets, acknowledging that Archie is already having a huge impact on her life.

“He takes me to training at Bath University three times a week, which involves a one-and-a-half mile walk to the station, a 30 – 45-minute rail journey, and a bus ride,” added Kelly.

“He’s given me extra confidence and a whole new lease of life — I am no longer reliant on people giving me lifts; I’m independent and that’s an amazing feeling.

“Although I won silver at the Invictus Games, I’ve struck gold with Archie.”