Helen Kidson tells Joanne Bednall how her dog, Penny, was left fighting for her life after an extreme reaction to an adder bite.

A residential grass verge in a sleepy Lincolnshire village is the last place anyone walking a dog would expect a venomous snake to be lurking.

But just 20 minutes from her home, Helen Kidson’s Greyhound, Penny, must have unwittingly disturbed an adder as it basked in the spring sunshine, concealed in the long grass left uncut during the recent lockdown.

The eight-year-old dog was being walked by Helen’s teenage daughter, Charlotte, one Saturday in mid-May, when she suddenly, and uncharacteristically, sat down and refused to move.

“Charlotte called my husband Keith, who drove out to collect them,” explained Helen, a business administrator from near Lincoln.

“Penny whimpered as Keith lifted her into the car, but she seemed OK at home and slept for the next couple of hours.” But later that afternoon, Helen became worried when the Greyhound’s condition suddenly deteriorated.

“Penny was panting and shaking and just didn’t look right,” continued Helen, 39. “We took her to the out-of-hours Vets Now practice in Lincoln, where, due to COVID-19, she was taken off us in the car park, and we had to wait 20 minutes while a vet examined her.”

But other than a high temperature, which the vet thought indicated an infection, Penny wasn’t displaying any other symptoms, and she was sent home with painkillers and antibiotics.

That evening, and throughout Sunday and most of Monday, Penny seemed a little bit brighter.

“She was a little lethargic but was still eating,” said Helen, who was shocked when Penny took a sudden — and very drastic — turn for the worse later that evening.

The black and white dog, who the family rehomed from the Retired Greyhound Trust in Lincoln six years ago, was lying on her bed, barely moving, with a blank expression, and she felt very hot.

After alerting their local vet’s, which was luckily just a minute’s drive away and still open, Helen and Keith somehow managed to get Penny into the car.

“She couldn’t walk, let alone jump into the car,” said Helen, who was starting to think they might lose their lovely natured dog.

“Her belly was tender, and a small grey/ red rash had appeared there. We had no idea what was wrong, but wondered if she might have a growth.”

At the practice, Penny was collected from the car park by a vet and vet nurse, who both looked worried.

“They obviously thought her condition was serious,” continued Helen, who sat in the car with Keith, nervously awaiting news. “Half an hour felt like forever.” When the vet came out with no dog, Helen’s heart sank.

“He couldn’t explain Penny’s rash and very high temperature of 40.8 degrees, but told us to take her home and try to cool her down — otherwise she might die.”

So that evening, armed with more painkillers, anti-inflammatories, a thermometer, fan, and wet towels, the family faced a race against time to lower their dog’s temperature.

“Penny wouldn’t eat or drink so we sat up with her, splashing her lips with water and taking her temperature every hour,” continued Helen, who was relieved when finally, around midnight, Penny’s temperature dipped to 39.4 degrees.

For the following two days, Penny returned to the practice and was put on a drip. On the second day, she saw a different vet, who made a startling suggestion to Helen.

“The vet thought that Penny’s symptoms pointed to a snake bite,” said Helen, who initially dismissed the diagnosis. “Our fist thought was: ‘How ridiculous! There are no snakes around here!’ We don’t have any parks or woods nearby, and we concluded that the vet was clutching at straws.” 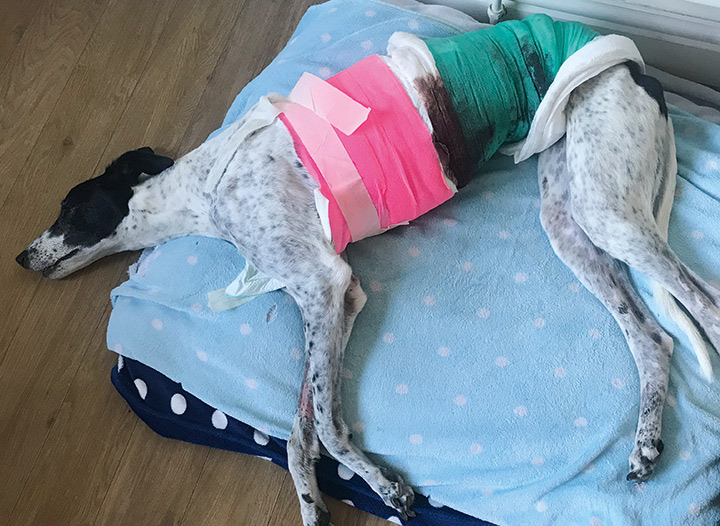 But Keith googled Penny’s symptoms and found they matched perfectly.

“Then the vet called to say she’d received the blood test results and was 99 per cent certain Penny had been bitten by an adder. It’s very hard to get hold of anti-venom as it isn’t licensed for use on animals in this country, so our only course of action was to manage Penny’s symptoms and hope she gained strength. It could have gone either way,” explained Helen.

The following morning, just as they were about to leave for the vet’s, Helen and Keith were surprised to hear paw steps and see Penny’s pretty face appear round the door.

“We were really encouraged as this was the first time she’d got up on her own in days,” continued Helen, who was further bolstered when their dog ate a little that evening.

Although Penny seemed to be slowly improving, the rash was now covering most of her belly.

“It was very odd,” continued Helen, who described the colour changing quite quickly from pinky-grey to black. “Then I noticed yellow pus and thought it had become infected, so we rushed her back to the vet’s. They told us that Penny’s skin was dying and she needed to have the dead tissue removed to prevent it from spreading.”

Although Penny’s liver had been damaged by the venom, tests showed she had recovered sufficiently to undergo the surgery. But despite being warned about what to expect, the family still wasn’t prepared for the horror to come.

“When we picked Penny up, she looked like a mummy,” explained Helen, who was horrified to see blood seeping through her dog’s bandages.

“At home, it soon looked like a horror film. Every time Penny moved, blood would seep out. She’d been given more painkillers but we could hear blood dripping on the floor and her whimpering and pacing about all night. The dog was upset; the kids were upset, and I don’t know how we coped. I couldn’t see how she could get better from this. Finally, at 4am or 5am, she zonked out on her bed and slept.

“It was a hard weekend. I was stressed by Penny’s suffering and we were approaching the limit on our insurance, so I called the practice and asked if they thought she would ever get better. The vet said it was early days and to focus on getting through the weekend.”

On Monday, Helen was relieved to see a significant improvement. The bleeding had stopped, Penny’s eyes were brighter, and she was suddenly more interested in her surroundings.

Within five weeks, half of the affected area, which stretched from Penny’s belly to her back legs, was already healing and her twice-weekly vet visits had decreased to once every two weeks by the end of June.

“Although she’s still on two lots of antibiotics, Penny is eating and going for five-minute daily walks, while the vet is pleased with her progress,” added Helen, who was touched by the kindness shown to the family by the local community.

“Our eldest daughter, Emily, set up a GoFundMe page to help towards the veterinary costs and raised £550. Penny’s former racing owners donated, and people even turned up on our doorstep with bandages.”

But Helen is mystified how their dog came to be bitten in the first place. “We never dreamt anything like this could happen here.

“Owners need to be aware of what can happen if their dog is bitten by an adder and stay vigilant, particularly between April and August.”