When Maria Williams heard a sickening bang in the road outside her home last autumn, she instantly knew her dog had been run over. In a state of panic, she ran downstairs to find her beloved eight-month-old German Shepherd, Bella, lying in the street, just metres from her front door in the Derbyshire town of Belper.

“I felt sick to my stomach,” said Maria, wincing as she recalled the dreadful details of that Monday evening back in early October. Standing next to Bella’s blood-soaked body was Maria’s husband Mark and son-in-law James, shaking their heads disconsolately.

“I heard one of them say: ‘I think she’s dead’,” said Maria, who was shocked to see her puppy motionless and surrounded by so much blood. Bella had run out of the house to greet Mark and James as they arrived home from work, but was struck by a passing motorcyclist, who initially wasn’t aware he’d hit her. Very soon, a small crowd was gathering around Bella, including the mortified motorcyclist and neighbours, one of whom had rushed over laden with blankets and a first aid kit.

“Bella’s face looked as if the bottom of her jaw had fallen off,” continued Maria, 49, who watched in a daze as the kindly neighbour bandaged the dog’s broken face. “I was just in pieces and my daughter Kirsty’s kids were heartbroken.”

Unbelievably, Bella was still breathing, albeit “making a horrible noise”. Maria rang her local vet’s, the call diverting to the emergency 24-hour Derby PDSA Pet Hospital, whose staff were on stand-by with a stretcher when Bella arrived 30 minutes later.

Maria and Mark waited nervously while vets assessed Bella and gave her pain relief. But her injuries were so severe that she was referred to Scarsdale Vets’ referral hospital at Pride Veterinary Centre, just a five-minute drive away. The couple finally went home at 12.45am when Bella underwent a CT scan.

“But I couldn’t sleep and sat up all night, waiting for news,” continued Maria, a shop supervisor. I was called at three o’clock in the morning and told Bella had sustained fractures to her face and head, and it would be two days before they could operate. But they said they would do their best for her.”

He explained: “When Bella first came in, it wasn’t that obvious how bad her injuries were, despite the massive impact to her head. Her fur covered a lot of the damage and, remarkably, she wasn’t showing any neurological deficits nor had any severe injuries elsewhere. She was also bleeding from her nose, which indicated facial trauma.

“Because she was in shock, we had to stabilise her before we could do any further examinations or consider surgery. A CT scan of her head revealed that Bella had severely comminuted maxillofacial [multiple skull and facial] fractures, with her nose and part of her skull being complete displaced. Until this point, the gravity of her injuries, while suspected, were not that obvious, but when we saw her CT scan, it was like looking at a jigsaw puzzle.” 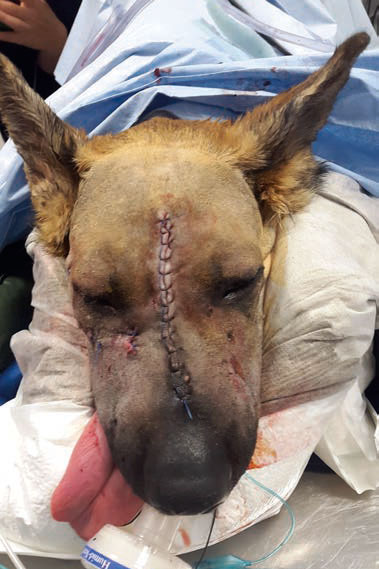 After being monitored in intensive care for a couple of days, Bella underwent an emergency two-hour operation in which Rosario and surgical resident, Ines Gordo, reconstructed her head, guided by a 3D CT scan.

First, an interdental wire frame (like a human brace) helped to stabilise Bella’s jaw and palate while her teeth were put back in their proper place with dental resin.

Next, Rosario used titanium mesh — the first time he’d treated a trauma case with this kind of implant — to stabilise the fractures, reconstruct Bella’s mid-face, and help with the closure of the skull.

Finally, to prevent future infection or nasal obstruction, all the small loose pieces of bone fragments from Bella’s nose and skull were removed.

“This has been one of my biggest challenges from a head trauma point of view, but I felt that the surgery went as well as I’d hoped,” added Rosario, who plans to document Bella’s case for a scientific publication. The surgery would not have been possible without the expertise and knowledge of the multi-disciplinary team here at Pride, particularly our diagnostic imaging team, as accurate CT scans were crucial, and our anaesthetic team, for such a critical patient.

“Post-operative care was essential, especially as part of Bella’s skull had been crushed during the accident and couldn’t be fully reconstructed. This, and the fact that her nose had been heavily impacted in the collision and manipulated during the operation, meant controlling her pain relief was paramount, as we had to make sure she was as comfortable as possible.”

As soon as Maria heard that the intricate operation had gone well, she was overcome with relief. “Although I was told they were confident the titanium mesh would work, I was warned it would be a long road to recovery,” she said. But Bella’s post-op recovery proved quicker than expected, and she was allowed home just two days later.

“When we went to collect Bella, we were prepared for her face to be a mess,” continued Maria. “But although it appeared a bit wonky, it was neatly stitched and didn’t look as bad as we were expecting. She was just so happy to see us!”

Bella was discharged with pain medication and a list of instructions, which included daily five-minute on-lead walks. Playing with tuggy toys and other dogs were strictly off -limits for at least six months. After a fortnight, Bella’s stitches were removed and her wounds checked, and four weeks later, the dental frame was taken out under general anaesthetic. Now, six months on, Rosario is thrilled with Bella’s progress.

“A further CT scan is planned to see how the bone has healed, although I am confident that clinically everything seems solid,” concluded Rosario, who praised Maria and Mark for following Bella’s care plan to the letter. She is doing extremely well and, cosmetically, you would never know she had been in such an accident, which given her initial CT scans, is something we are very proud of, too!”

Maria added: “The vets were amazing — if it wasn’t for the whole team, we wouldn’t have Bella now.”

“Bella’s case was a first for me as I’d never seen such a severe head injury or this type of surgery for a trauma case before,” explained Louise, who was prepared for a period of intensive nursing following Bella’s operation.

“But the morning after her surgery, she was amazing! She wanted to play and was so bright and happy — she even ate with a bit of encouragement. No one expected her to recover as quickly as she did. She really was the perfect patient.”