Dogs and gardens do mix

Myth 1: You can have a nice garden or a dog but you can't have both

Definitely a myth. There are plenty of popular TV gardening experts, including Alan Titchmarsh (a history of Labradors), Carol Klein (a brace of Lakeland Terriers), and Monty Don (a Golden Retriever), who successfully manage to combine being dog owners with having beautiful gardens.

Admittedly, most of us probably don't have such large areas to tend, and there's no doubt that the smaller your plot, the more wear and tear it's likely to suffer at the paws (and teeth) of your dog. But that's no excuse for claiming that nothing can be done to prevent your dog from making it look like a prison exercise yard. It's perfectly possible to keep your garden looking good while also making it a fun place for your dog. All it takes is a little extra effort. You'll both benefit from it, and you might even find yourself enjoying the challenge!

Myth 2: The urine of bitches is more damaging than that of males

The urine of both sexes is the same - this myth is due to the difference in toileting habits rather than content. Bitches tend to squat, and most will empty their bladders completely in one spot. Male dogs (once they've learned to cock a leg) are more likely to spread it around, treating it as a scent-marking exercise as much as a bladder-emptying one.

It's the quantity of wee, rather than the quality, which does the damage. Urine has a high nitrogen content, and while this can be a great fertiliser, if overdone it will burn the growth instead - which is why those dead brown patches on the lawn are surrounded by lush growth, where the concentration of nitrogen is less.

The solution to the problem is both easy and cheap. As well as free-running walks, take your dog out for briefer lead walks too so he has plenty of opportunities to wee elsewhere. At home, keep a filled watering can ready, and if you see him having a wee, add three or four times the volume of water (once he's finished, of course) to dilute the excess nitrogen. If you have a male dog and see him fertilising your plants, water them too, as although the quantity may be less, if he keeps returning to the same spots it will be cumulative and result in damage.

Myth 3: Dogs instinctively know how to self-medicate so it's safe to let them graze on plants

If this were true, there would never be any cases of poisoning. Some dogs are insatiably curious and will put absolutely anything in their mouths, even when it doesn't taste very good.

Many dogs enjoy grazing. If you have a nibbler, then it may be best not to grow anything that is toxic; despite your best intentions, it won't be possible to keep a close eye on him for every single second that he's out in the garden. It doesn't mean you need to deprive him completely of the pleasure of browsing though. Leave a small patch of grass in your garden to grow long, or, if you don't have the space or are too tidy a gardener, create his own special grazing spot in a pot instead. Chop off any seed heads as they can cause trouble by getting stuck in ears, eyes, noses, and between toes.

Although many dogs show no interest at all, it's true that some are terrific diggers - and not just the terrier breeds traditionally associated with such activities. If digging is in your dog's blood, then you'll find it difficult to stop him doing it without keeping him under constant surveillance - and even if you do succeed in stopping him excavating in one spot, he'll probably just move on to a different place. Thwarting his natural instincts may also make him miserable and could possibly lead to some other alternative but equally annoying behaviour instead.

But if you do have an enthusiastic digger, it's not true that you have to live with a garden that looks like a badly organised archaeological site. The secret is to focus his activities on to one area instead of allowing him free range. Creating a digging pit will keep you both happy, especially if you keep hiding exciting things in it - the prospect of discovering buried treasure will encourage your dog to keep using it.

It's a fairly simple thing to make, but if your DIY skills are really minimal, you can buy raised bed kits which will help to define the permitted digging area.

Slightly loosen the soil at the bottom of the pit with a fork, top up with clean top soil, add a few goodies, and then sit back and watch your dog have fun.

Myth 5: It's impossible to grow anything from seed as it will just get trashed by your dog

Growing plants from seed is much cheaper than buying grown plants bought from the nursery, and if there are too many seeds in a pack for your own needs, you can swap with your friends, increasing the variety while keeping costs minimal.

Some plants seem to cope better than others. I've never had much trouble with nasturtiums grown for ground cover, with California poppies or poached egg plants, even though the dogs have trampled all over them.

Others are more delicate though, and definitely won't survive if sown directly into a bed, but there are ways around this. Either keep a fenced-off nursery bed for bringing on seedlings and young plants, or grow them individually in pots. Once they are bigger they can be planted out, and by densely planting, you'll not only have a great display, but your dog may be less likely to potter around in the beds. If he does still persist, however, you can either spend some time teaching him to stay off flower beds, or use containers. 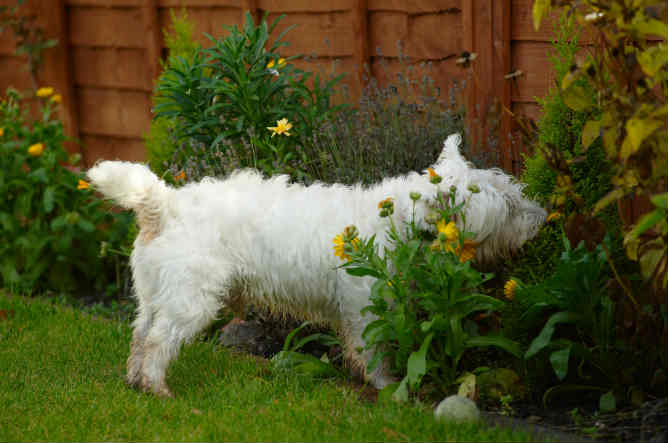 Myth 6: Having a garden will allow your dog to exercise himself

A garden can be a great place to have fun with your dog, but shouldn't be viewed as somewhere you can turf him out to do his own thing as an alternative to taking him for a walk. Getting out and about is as important for your dog mentally as the physical exercise involved.

Making sure your dog gets enough exercise away from home means your garden will be less likely to suffer damage, and it can become a place where he can enjoy a well-earned rest, rather than behaving like a hooligan. Engage him in less adrenalin-fuelled activities, so that he learns how to relax in his surroundings. Chew and interactive toys, having a Tellington TTouch session, grooming, or giving him a massage, are just a few of the many ways you can keep him entertained and minimise destructive tendencies.

Myth 7: You can share healthy fresh fruit and vegetables grown in the garden with your dog

Growing your own fruit and veg can be hugely satisfying, and always tastes better than anything you buy in the shops. If you have the space to do this in your garden, you will need to keep it securely fenced off to prevent your dog from being able to access it. As well as keeping him from fouling your crops, for his own safety you may need to keep him out of contact with fertilisers or pest-control measures.

There is also the matter of self-service. The first year I had my dog Archie, I was looking forward to eating the strawberries I'd planted in a small raised bed. He managed to get there before me and scoffed the lot! Having learned my lesson, I've moved them all to the allotment.

It's important to remember, though, that not everything you can safely eat is fine for your dog. Grapes and anything in the onion family, including leeks and chives, can be toxic. If space is limited, it's amazing what you can grow in hanging baskets and wall-mounted containers, and which combines maximising your growing area with keeping it out of reach of your dog. Tumbling cherry tomatoes, or trailing strawberries planted up with variegated pineapple mint or violas, can look attractive as well as being practical. A hanging basket just outside the kitchen door can also be the ideal place for growing herbs or salad leaves, fresh and ready to hand.

Plants can, of course, be a major danger to pets. Within the limited confines of a garden your dog may be more inclined to experiment, and even an unpleasant taste isn't enough to deter some from a bit of unwise sampling. Potentially fatal plants, such as oleander (nerium oleander), yew (taxus sp), pieris (pieris japonica), sweet pea (lathyrus latifolius), and lily of the valley (convallaria majalis), are best avoided altogether. Others, which are less toxic, you may judge as an acceptable risk to have around - but if you can't guarantee your dog's actions, you may prefer to stick with those plants known to be safe.

If you want to grow pet-friendly plants you have plenty of choice. A few of my personal favourites include:

Karen Bush's book 'Dog-friendly gardening' has lots of information for dog-owning gardeners about how to keep your dog safe in the garden, and how to create a stimulating outdoor environment that you both can enjoy.