Dog reunited with owner after 10 years thanks to microchip After 10 years, Sarah Covell was finally reunited with her dog thanks to the terrier’s microchip, but the campaign to make the scanning of dogs compulsory continues, as Julie Hill discovers.

Image: Reunited — 18-year-old Elektra with Layla, 19-year-old Tallulah with Crumpet, and Sarah with Fizzy and Gnasher.

It’s one of a dog owner’s worst nightmares — dog theft. Imagine this scenario: one minute your dog is playing happily in your garden, and the next there’s no trace of her. You search high and low, calling her name louder as the panic grows, but still can’t find her. Even worse, the dog in question is a tiny puppy.

A month passes, and there’s still no sign or sighting of her, nor the next month or the next — and months expand into years.

For Sarah Covell, from Dorchester, Dorset, this horrific situation unfolded in real life. “The not knowing is so horrible, because you fear the worst, but you don’t know, and you never have any closure; there’s no end,” she explained.

Sarah’s sad story starts back in 2010.
“I had an older terrier who was about 13, and my husband bought me a little black and tan Jack Russell, Crumpet, for my birthday in July. My two little girls — seven and eight at the time — were home during the summer holidays; we had a few weeks, and we had lots of fun with her. She was just lovely.”

Summer turned to autumn, the girls went back to school, and Sarah recalled the dreadful day things went wrong. “It was a nice day,” she said. “The dogs were playing around in the garden. I was just next door, mucking out and feeding the horses. I was probably gone 15 – 20 minutes, and when I came back, I couldn’t find her anywhere.”

Oddly, Sarah’s older terrier was still in the garden, and so she began to consider the possibilities. She searched the garden, then down the drive, onto the road, and into the churchyard opposite. She knew such a small dog couldn’t have travelled far unaided, and Crumpet had never shown any inclination to escape or wander off.

“I couldn’t find her,” Sarah recalled. “I started going around the village, then I got in the car and drove around — still nothing. It was awful. I rang the local dog warden and notified them, and spoke to my vet, because she had a collar on with my vet’s number, so I warned them just in case someone rang. 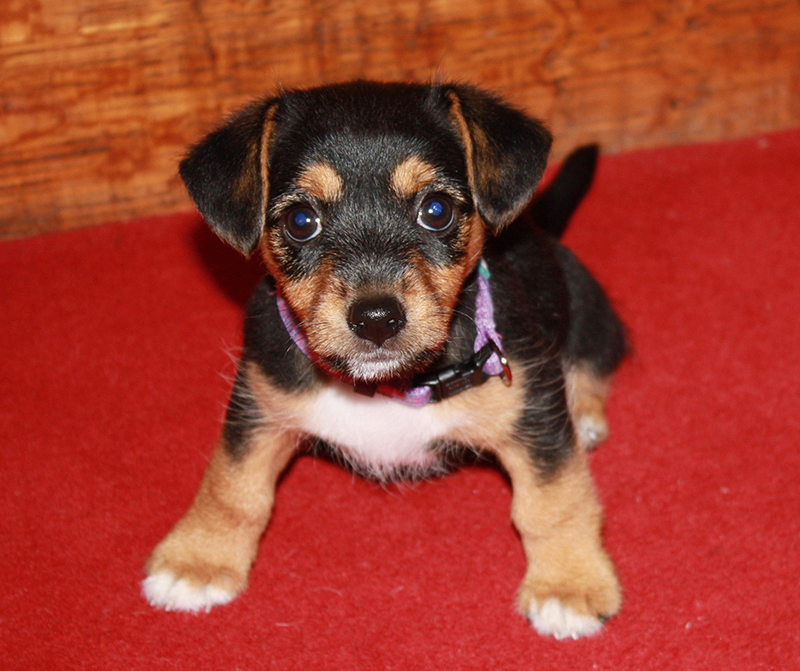 Crumpet was just a puppy when she disappeared.

“My children were heartbroken, and I said: ‘Don’t worry, we’ll find her.’ Next day, I drove further away. I knocked on a few doors and we kept looking. I put flyers around the village and local area. I put up a reward for her, but she’d disappeared without a trace.

“Everything went through my mind. Perhaps she’d been run over — but somebody would have stopped. Maybe she had crawled into somewhere and got stuck. At one stage, we even wondered whether a buzzard had picked her up. You torture yourself with what might have happened. I felt really guilty because I hadn’t been watching her every minute, but I was only literally next door. 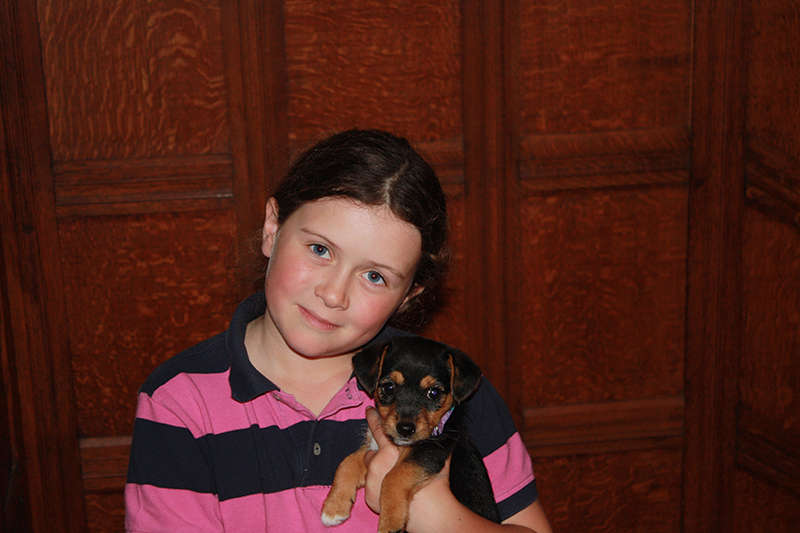 Crumpet with Sarah’s daughter Tallulah in 2010.

“‘The Dorset Echo’ published an article about her, but still we heard nothing. Eventually, time went by, and we just sort of gave up hope after about a month.
I’m afraid we just thought she’s not going to come back now. Someone’s got her and doesn’t want to bring her back or she’s dead.”

Five years passed, and the microchip company contacted Sarah to ask whether she would like Crumpet’s details deleted from their system. Sarah had to inform them that she did not actually know whether her dog was alive or dead, and consequently Crumpet’s microchip was kept on the system, but flagged as missing.

Fast forward another five years, and unbelievably, Sarah got another phone call about Crumpet.

“It’s now nearly 11 years since she went missing. She’d been found on a golf course just outside Bournemouth and taken to an emergency vet’s. They scanned her microchip and saw it was on a suspended list. They rang the chip company who put them in touch with me.”

To say the least, Sarah was shocked. “I was flabbergasted to be honest, completely dumbfounded. I never thought I’d ever hear about her again.”

Sarah and her daughter drove to Bournemouth, wondering all the way what Crumpet would be like now. As Sarah pointed out: “Nearly eleven years is a long time in a dog’s life. I was worried when I was going to pick her up because I didn’t know how she’d been treated — she might be aggressive with us.”

Fortunately, Sarah soon recognised in this adult dog, the sweet-natured puppy she had known so briefly so long ago. Though confused, Crumpet’s tail never stopped wagging. Sadly though, the little terrier may not have had adequate veterinary care, as the vet suspected an untreated infection had rendered her deaf; she had huge growths in her ears, and a heart murmur. 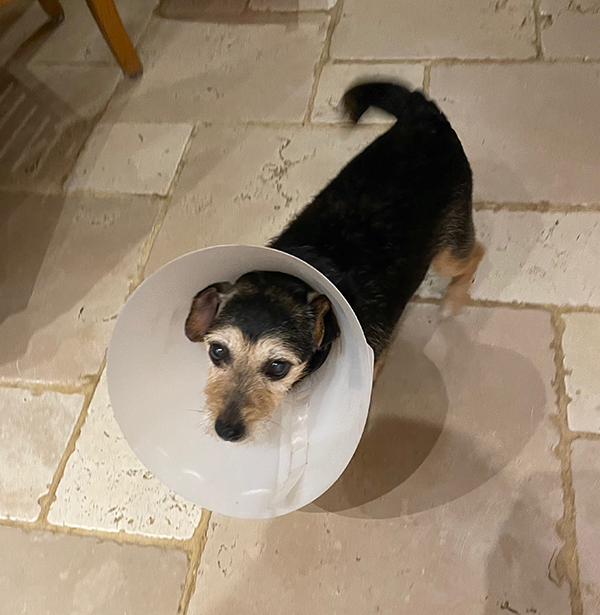 Crumpet needed veterinary treatment after she came home to remove growths in her ears. 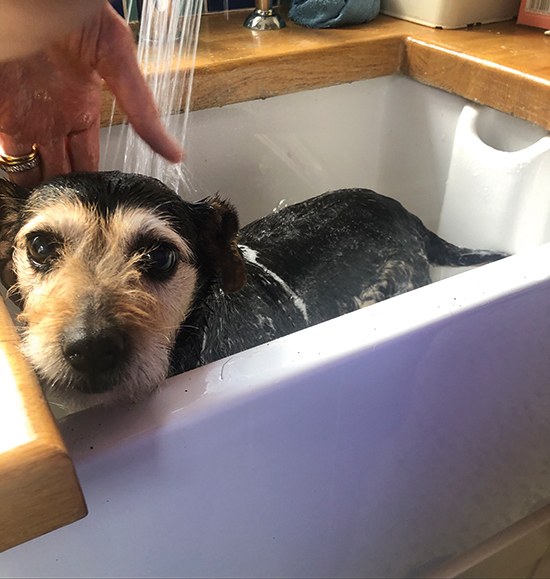 A home for life

Crumpet’s past was shrouded in mystery — but what of her future? Happily, there was never any doubt in Sarah’s mind that her long-lost dog had a place in her heart and her home.

“We’ll definitely look after her for the rest of her life. I’ve got other dogs since then, and it took a while for everyone to get to know each other, but she’s part of the family and she’s an absolute poppet.”

“It’s extraordinary she’s come back,” Sarah reflected, but although she is very positive, the reunion was bittersweet. “I feel very sad that I’ve missed all the good years of her life, but it’s lovely we’ve got her home and she’s going to have a lovely home for the rest of her life. I’m cross with whoever took her, because we would have given her a lovely home for all of her life.

“My children have been over the moon. They remembered her, even though it was a long time ago for them — they’re now 18 and 19.

“Thank goodness for the chip, because I have to say if it hadn’t been for the chip we would never have got her back.” 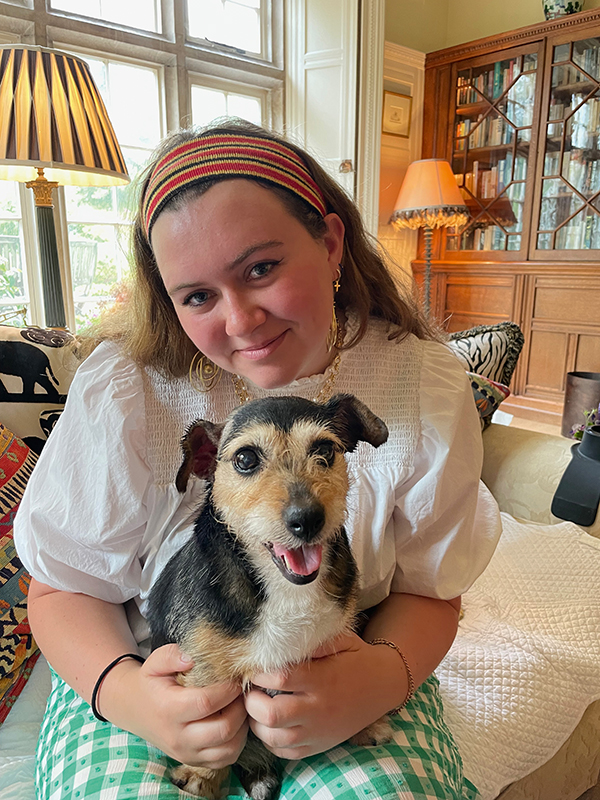 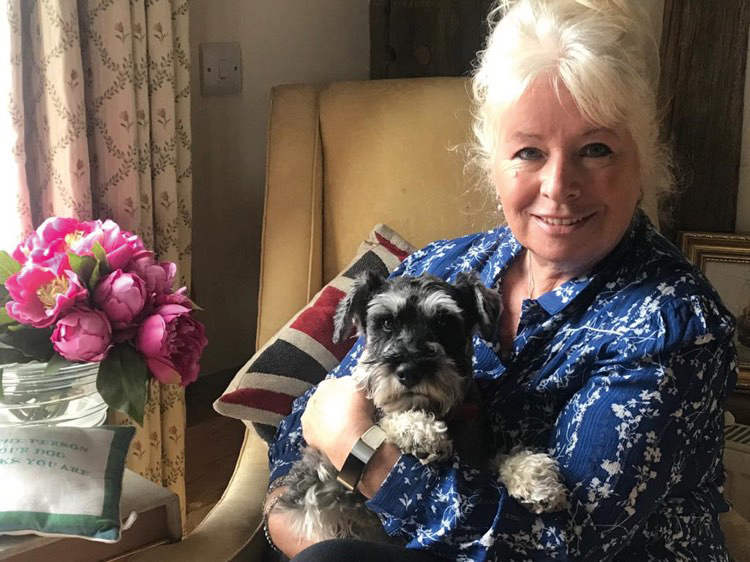 When Debbie Matthews’ Yorkshire Terriers, Widget and Gizmo, were stolen in 2006 she was horrified to learn that their microchips would not be automatically scanned by any vet who encountered them.

The experience led her to found Vets Get Scanning, and campaign for the scanning of microchips to be made mandatory. Fifteen years later, Debbie is still striving for that objective.

“It’s compulsory to microchip our dogs, but it’s optional to scan,” she explained. “It’s not compulsory to check the chips — and until that day happens, microchipping really is not being supported by the professions that are selling it to us.”

This is a shock to most dog owners, and as Debbie said: “It’s on your day of need, when you are relying on that little microchip in your dog, that you probably find out that it’s not going to help you.”

However, there is hope; Debbie is awaiting the outcomes of three consultations about petitions.

Debbie can’t believe she’s still battling, and she urges owners to share lost dogs on social media, and to ask their own vet to scan all dogs at least on first presentation.

“If you like, it’s a trading standards issue,” she said. “I asked Focus on Animal Law (FOAL) about it (a group committed to creating robust legislation that will improve the quality of life of animals). They said that there isn’t one database that doesn’t sell their chips as a way to get your lost and stolen pet back. But the microchip will only work if it’s scanned and checked.”

Backed by her famous father, Sir Bruce Forsyth, Debbie got her dogs back, but she still remembers the emotional turmoil.
“I didn’t sleep, I didn’t eat. I was constantly thinking about how I could raise their profile, what else I could do — I haven’t been to this town, this is where I’m going to go next and put posters up. It’s constant, it just takes over your thoughts completely.” 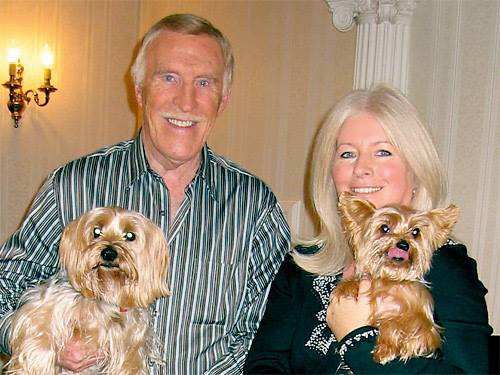 Debbie with her father, who supported her campaign, and with Widget and Gizmo after they were reunited.