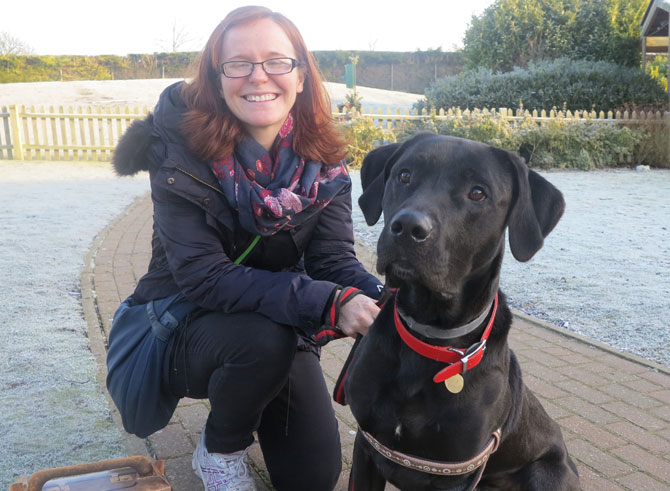 Labrador dumped in a skip two days before Christmas finds loving new home for 2015 thanks to Wood Green!

A young dog whose previous owner abandoned him in a skip, just two days before Christmas, has found a wonderful new home after being cared for by a Cambridgeshire-based rescue centre.

Handsome Beaux was brought into Wood Green, The Animals Charity, on December 23, 2014, after a member of the public chanced upon him moving around in a skip on the side of a street in Cambridge.

He was very thin and nervous of everything around him. While his Christmas was less than we would have hoped for him, Beaux was at least warm and cared for, and we started straight away on building up his confidence.

After a month of training and TLC at Wood Green he has now really come out of his shell and has completely won over the hearts of the staff.

And this morning (January 23) we waved him off as he went home with his new owners, couple Elizabeth Dowling and Andrew Dawson from Fen Ditton in Cambridgeshire.

Wood Green dog rehomer Kirsty Phillips said: "When he came in to us Beaux was so nervous, he would hide in the back of his kennel and was obviously under-nourished.

"But he's a fantastic, friendly boy and he's just come on leaps and bounds - he's great with people and other dogs and is such a happy dog. It's amazing to see him now and we're so happy to see him go to a great new home."

Ms Dowling said: "We heard his story and saw his timid little face on the Wood Green website and fell in love with him - but when we came in to the charity to meet him we were amazed at how happy and bouncy he is now.

"We've got everything ready and are looking forward to spoiling him. We can't wait to get Beaux home!"