When it comes to her Poodle Bobby, actor, comedian, and writer Diane Morgan just wants him to be happy. She spoke to Alison Gallagher-Hughes about life with her much-loved pet.

Diane Morgan is a regular on our TV screens — from mockumentaries and sitcoms to comedy dramas including ‘Cunk on Britain’, ‘Mandy’, and ‘Motherland’. She is currently starring alongside Ricky Gervais in the final series of ‘After Life’ streaming on Netflix.

Fans describe her as a “21st century Joyce Grenfell” — a talented writer and performer, who is outrageously funny, with a dry humour and quick wit. 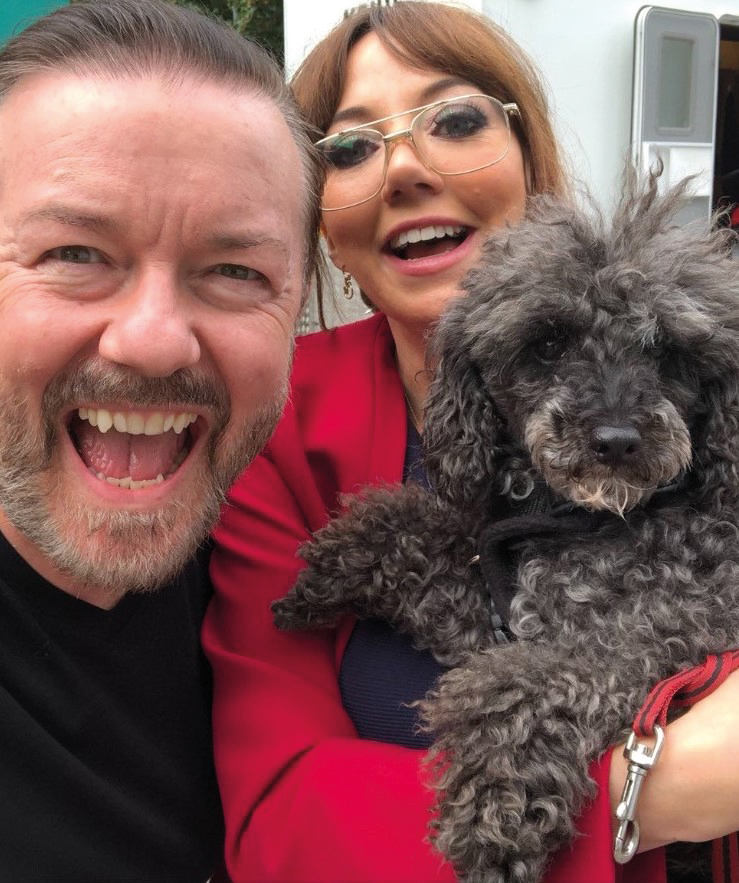 Diane and Bobby with Ricky Gervais on the set of ‘After Life’.

Originally from Bolton, she currently lives in central London with her partner, TV producer Ben Caudell, and Toy Poodle Bobby, whom she adopted from Blue Cross.

As Diane Morgan bursts on to my Zoom screen, she catches sight of herself: “Oh God, look at my hair,” says the woman whose auburn locks are nowhere near as dishevelled as the Bet Lynch updo sported by her comedy alter-ego Mandy. When I point this out, she retorts: “No, but it’s a close call though, isn’t it?”

This sets the tone for a hilarious conversation — the first interview I’ve undertaken that has had me crying with laughter!

Q: So how did you get into comedy?

“I went to drama school but didn’t get any work, except for a tiny bit in ‘Phoenix Nights’, thanks to Peter Kay. Apart from that, nothing. I put myself out there but couldn’t get arrested. I started doing stand-up because 30 was looming and I thought I’ve really got to do something. It went well, I carried on doing it, and that led to getting a few bits and bobs. Then Philomena Cunk happened, which sort of changed everything.”

Q: What prompted you to get a dog?

“For the last few years, I really wanted a dog and this feeling was getting stronger and stronger. Then my dad died, and my partner, who had always said no to a dog, said OK. I think he could see that having a dog was going to help me. But of course, the dog loves him now, and he loves the dog. He couldn’t see this coming, but it’s always the way, isn’t it? The person who says ‘no, I don’t want it’ has the big love affair. Bobby has helped me; a pet is not a cure for grief but a lovely distraction that stops you from focusing inwards.”

Q: How did you go about adopting Bobby?

“I looked on the websites of several rescue charities, filled in forms, and had been turned down as not the right potential parent. Then I met someone from Blue Cross at a book signing and she encouraged me to take another look. So, I did, and the first dog I saw was Bobby, a seven-year-old Toy Poodle.”

“I went to see Bobby in Manchester. He was still with his original owners until a new one could be found. I got to meet him, take him for a walk, and spent half an hour just playing with him, getting to know him and seeing whether we got on, although the minute I saw him, I thought: ‘yes, I’m taking you home’.

“We’re totally obsessed with him. We don’t have any children so this dog has become a son really. He’s nearly 10 now.”

Q: How do you manage when filming?

“We’re lucky as we both work in TV, so one of us can usually be at home to look after him. I don’t think I’d trust anyone else to look after him. I can take him on jobs as well. One of these was ‘After Life’, because Ricky Gervais loves dogs, obviously, so I took him down to the set every day. He’s so well-behaved. He’d sit backstage and watch me on the monitors.”

Q: Has he appeared on TV?

“Yes, he was in the last series of ‘Mandy’ and appeared in the Christmas Special. He gets a credit as Robert Bovril Morgan.”

“There are no rules; basically he can do what he wants. I just want him to be happy.”

Q: So, that probably answers my next question: dog on the bed, yes or no?

“He’s allowed everywhere. I don’t force him, but the offer is there if he wants to.”

Q: Accessories, yes or no?

“Oh, yes. I have bought him about 37 jackets and he refuses to wear all of them. I’ve spent a fortune on them!”

Q: Does Bobby have his own social media channels?

“No, I barely get time to do my own, let alone one for him.”

Q: How do you like to spend time with Bobby?

“If we’re not working we’ll often just cuddle on the bed. My partner’s parents have a big paddock at the side of their house and he loves going there and doing zoomies. The minute he gets in the paddock, he looks so happy. It’s sort of infectious. I love seeing him running free.”

“We took him to ‘L’Escargot’ on his birthday last year; It’s a really fancy restaurant where they allow dogs, and he loved it. We also take him to ‘The Standard’, in Kings Cross, which is like a hotel/restaurant with an outdoor area with heaters. We’ll stop off and have a coffee; he gets very excited being there.”

“Growing up there was always a family dog. But Bobby is my dog. There’s a different sort of bond, a responsibility to give him a really good life. He’s got so many toys, raised bowls; we’ve turned the heating off because he’s got a bit of a cough at night and someone mentioned that it helps. So, we don’t have any central heating at the moment and we’re absolutely freezing.”

Describe your perfect day with Bobby...

“Probably at the beach. There’s a part of Camber Sands where you can walk your dog, and he loves going there, although it’s a shame that there are only certain sections that allow dogs, and some beaches, not at all. Also, he doesn’t like water, so it’s strictly the sand he’s after.”