Joanne Bednall hears how a cross-breed found in a binbag in Romania has not only helped mend his owner’s broken heart, but won at Crufts.

Despite growing up in a canine-free household, Lizzie Lang dreamed of the day she could have her own dog and perhaps try her hand at agility. While her first dog Benji, a Flat Coated Retriever X Border Collie, showed an aptitude for this fast and furious dog sport, it didn’t take Lizzie long to realise how much training, hard work, and dedication was involved.

“Benji was good, but I wasn’t,” laughed Lizzie, whose next dog was a Pointer-cross called Freddie, whom she adopted from the rescue centre where she worked. “Although Freddie did win one agility competition, it was the only time he stayed in the ring!” Lizzie recalled.

However, these early ups and downs did little to deter the 36-year-old groom, and she soon found she was well and truly hooked on the sport.

“Although I was keen to progress in agility with a Flat Coated Retriever, I was advised to get a Border Collie if I planned to take the sport seriously,” said Lizzie, who also wanted a companion for Freddie. Lizzie, from Sulgrave, on the south Northamptonshire/Oxfordshire border, decided to take the plunge and bought Kali, a Border Collie puppy. But all her hopes were dashed when Kali contracted the neurological disease meningitis while still a puppy and became very poorly. Against all the odds, the young collie battled her way back to health and, despite being a late starter, showed a talent for agility.

Just as they were getting established in the sport, Lizzie was dealt another major blow. “When she was three, I found a lump on Kali and I knew instinctively it wasn’t good news,” she explained. “She was diagnosed with lymphosarcoma — and it was the start of a real rollercoaster ride.”

Kali was treated with chemotherapy and the cancer went into remission, but returned three years later in her stomach.

“It was a lot to put her through again, and she just didn’t want to fight any more,” continued Lizzie, who was heartbroken when she lost Kali aged just six.

At this time, Lizzie had got to know Cerian Edwards, who runs Bristol-based Happily Ever After Dog and Cat Rescue & Sanctuary (HEA), through a mutual contact in Romania, from whom they’d both fostered dogs in the past.

Just a month before she lost Kali, Lizzie was at the rescue to help welcome a special visitor. “I am a real fan of the musical theatre star Jodie Prenger, who is a massive dog lover,” said Lizzie, who has now fostered a total of five dogs from HEA.

“After one of her shows, I asked if she’d be interested in becoming an ambassador for the rescue and she expressed an interest in rehoming a dog.”

On the day of Jodie’s visit, Lizzie watched several dogs as they milled around, including a rather nondescript looking cross-breed called Yogi.

While Yogi had earned a special place in Cerian’s affections — she’d rescued him as a puppy after finding him in a binbag in a garage in Romania five years previously — he didn’t make much of an impression on Lizzie.

“I am drawn to collies and gundog types and Yogi didn’t stand out,” confessed Lizzie, who described him as looking like a mini German Shepherd. “Anyway, I wasn’t looking for a dog because I was focused on Kali, but Yogi hung around me all day.” 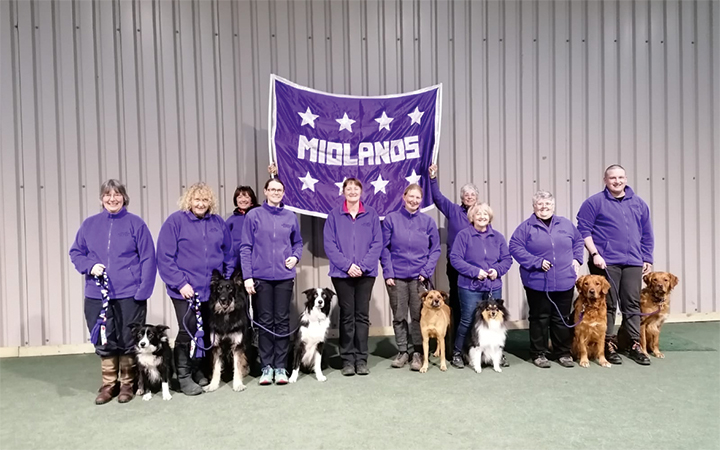 It was only when Lizzie lost Kali four weeks later, and Freddie struggled to cope as an only dog, that she recalled the unremarkable brown dog who had shown her so much attention.

“I asked Cerian if she had any suitable dogs and she assumed Yogi would be too laid-back for me,” continued Lizzie. “But my priority was a companion for Freddie — I had all but given up on agility — and Cerian was happy because she’d be able to keep in touch.”

Although Lizzie tried a bit of agility with Yogi she found it hard starting from scratch and it didn’t feel the same without Kali.

Additionally, it was discovered that although he wasn’t lame, Yogi had suffered a cruciate injury, so Lizzie looked for an activity that would involve less impact on his joints.

Following heelwork to music lessons with top competitor and judge Lucy Creek, Yogi showed potential, but Lizzie decided to try rally too. “We only started doing rally to fill the gaps in the calendar because there were more competitions,” said Lizzie, who admitted that she didn’t really know the rules when they did their first competition in 2018.

“I thought we hadn’t done very well and was packing up to go home when it was announced we’d come fifth and achieved a qualifying score.

“At the try-outs for the Midlands team in October, things didn’t go well — but we made everyone laugh and it gave me a good picture of the standard needed and what to aim for.”

So armed with a new-found enthusiasm, Lizzie and Yogi knuckled down to some serious training online, at home, and with Lucy. 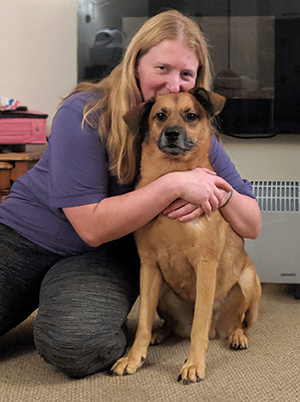 “Yogi’s an all or nothing dog and, despite doing zoomies and jumping on judges’ desks, he came away with a couple of seconds last year.”

In November 2019, Yogi and Lizzie, complete with her new young Flat Coated Retriever, Rudi, attended the try-outs for Crufts. She was hopeful that Rudi would be selected for level one — but he blew it, while unpredictable Yogi excelled at level three, and was not only shortlisted but sailed through the selection process, qualifying for the world’s greatest dog show.

“I was elated,” said Lizzie, who stepped their Crufts preparation up a gear by joining a rally club in Banbury.

“All was going really well until our last team practice session nine days before Crufts,” recalled Lizzie. “Everything went wrong for us — my family had come up from Cornwall to watch and Yogi was awful. He had no attention and ran off — not great for my confidence so close to Crufts.”

Lizzie sent her parents’ video of the session to Lucy, who suggested lots of helpful tips, and even devised a warm-up routine that would focus Yogi’s attention more fully.

“We practised every day, and when I ran through our routine before our round at Crufts, I knew that I had his attention. I was pleased with his performance and hoped we might achieve a place.”

When it was announced that the pair had won the Level 3 Inter-Regional Rally Obedience, Lizzie couldn’t believe it.

“Yogi has taught me so much — he’s so different to train compared to collies and flat coats but he’s very clever.

“Looking back, it’s odd how I chose him, but it felt right. Yogi has turned out to be the dog I needed, not the dog I thought I wanted.”