Come fly with me!

No dog is allowed to be sedated immediately before or during the flight because of cabin pressure and the effects on the dog's breathing. Some brachycephalic breeds such as Pugs, Boxers, and - in some instances - Bulldogs are not allowed to fly at all because of this.

Despite the Pet Travel Scheme, the UK is still lagging behind other countries in its attitude to pet air travel. Airports simply don't allow pets to enter the country as passengers.

Air France is one of the most pet-friendly airlines. You can take your pet on most Air France flights, subject to agreement at the time of booking, but you can't bring him back into the UK via the same route. Instead, you need to disembark in Paris and then complete the last leg overland.

More airlines allow dogs to travel as cargo in the hold. Virgin Atlantic has been running a pet travel scheme since 2003 and to date has flown 15,400 pets - 10,100 of them dogs.

A number of famous faces have been spotted travelling with their pets around the world, including actors Kevin Spacey and John Barrowman. Furry celebrities also choose to fly Virgin. Uggie, the star of Oscar-winning film ‘The Artist' flew to Los Angeles to attend the Oscars, and Mugly (‘the ugliest dog in the world') also flew with Virgin when he travelled to the USA to claim his ugliest dog accolade.

If you want your dog to accompany you in the cabin, there is one sure way to make this happen - and that's by truly embracing the jet set lifestyle and chartering your own plane! 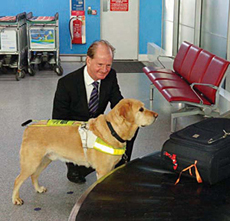 Assistance and service dogs are allowed to travel on airlines in style - in the cabin. Guide dog Brunel is one of the most travelled dogs in the UK, flying from his home in Southampton to Scotland, the Channel Islands, and the Canary Islands several times a year. Brunel blazed a trail for other assistance dogs when he acted as a guinea pig during the formation of several UK-based airlines' support dog policies. He guides his owner, Tom McInulty, on his journeys. "There's no doubt in my mind that Brunel loves flying," said Tom. "He is a cheeky character who really enjoys all the attention and fuss he receives from the airline staff and passengers.

"I often have to fly from Southampton to Edinburgh on business and to visit family so his frequent flyer miles are always increasing. Flying with Brunel means we are treated like celebrities - we have priority boarding and the airlines keep a seat free next to us so that Brunel has room to stretch out on the floor in front of me. His presence also serves to relax nervous passengers. On one occasion, I realised he was licking the toes of the woman in front and apologised to her but she was fine about it and said she was a nervous passenger and it was taking her mind off the flight."

The practicalities of taking Brunel as a passenger involve a strict toileting regime before embarking on the journey. The fun isn't over when Brunel reaches his destination, as he has aspirations to become a sniffer dog. Tom explained: "When we go to collect our bags, Brunel checks out all the suitcases and sniffs out the bags for me. He makes all our journeys a fun event."