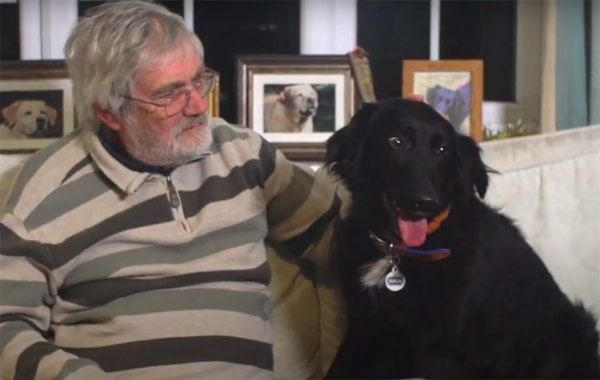 The RSPCA has launched its 2020 Christmas video, with a moving story showing how pets have helped tackle loneliness and isolation during a tough year.

The heart-warming film, which features Backstreet Boys’ hit As Long As You Love Me, touches on the difficulties many have faced in recent months, following the story of an elderly man who is feeling lonely and isolated during the Coronavirus pandemic, after losing his wife and his dog.

Viewers watch as his loneliness is mirrored by an abandoned dog, real-life rescue Storm, who finds himself alone, out in the cold until he is rescued by the RSPCA.

The film’s uplifting ending sees the man contact the RSPCA and get matched with Storm, bringing him home in time to introduce his new companion to family and friends on Zoom at Christmas.

The festive video, made entirely in-house by the RSPCA’s broadcast team, shows how pets can help tackle loneliness and improve our mental health.

An RSPCA poll carried out by YouGov* revealed that 45% of all pet owners surveyed said their pets have helped their mental health during lockdown. A recent study** carried out by the Universities of Lincoln and York also found that having a pet helped people maintain better mental health during lockdown. More than 90% of the 6,000 participants said their pet had helped them cope emotionally.

Chris Sherwood, Chief Executive of the RSPCA, said: “We all know that pets make fantastic companions but to know that not only do they help tackle loneliness but can also improve our mental health is truly amazing! It’s therefore no surprise that during what has been a particularly tough year, we have seen a huge surge in people interested in adopting pets. We know how important it is that people think ahead and make sure they can give a pet a loving home for life, just like Storm and his new owner in the film.

“We hope this Christmas video will tug on people’s heartstrings and show people how rewarding it is to adopt from the RSPCA. We expect to rescue thousands of animals in need this winter and we can’t do that without the generous support of our fellow animal lovers so we hope this touching film will also encourage supporters to donate to the RSPCA and help us continue our vital work.”

Singer and RSPCA press officer Lucy Ellie Cooper recorded a cover of ‘As Long As You Love Me’ by the Backstreet Boys for the film, and the video was created by in-house broadcast team Alan Laxton and Lewis Jones.

Last Christmas Day, the charity received more than 950 calls to its cruelty line, the highest number since 2013 and it received 63,000 calls throughout December, or 2,000 a day, making it the busiest Christmas period for at least four years.

This year, faced with the financial strain of the Coronavirus crisis, the RSPCA is concerned that more people may struggle to care for their pets and could see a rise in them being abandoned or neglected, putting more pressure on the charity’s rescue teams than ever before.

Donating just £25 could help keep our Animal Rescue Teams on the road and £50 could help feed all the rescued animals in one of our centres for a day.

To help the RSPCA rescue teams reach the thousands of animals who desperately need them, visit www.rspca.org.uk/xmas and Join the Christmas Rescue #JoinTheRescue