Renowned BBC sports commentator Andrew Cotter, who has been entertaining us all through lockdown with videos of his own dogs Olive and Mabel, has created his latest video for a good cause, in partnership with Dogs for Good.

UK-wide charity Dogs for Good launched their #WinningFromHome competition three weeks ago which asked entrants to post a video, on Twitter, of their own companion dog during lockdown.

The campaign has sought to highlight the power of our four-legged friends, celebrating why we are a nation of dog lovers.

Dogs for Good creates life-changing differences for people living with a wide range of disabilities and conditions including autism, physical disabilities, dementia and learning disabilities through the help of specially trained dogs.  The charity’s assistance dogs and community dogs enable people to live more independently.

The charity relies upon public donations to continue its work, and so benefitted from hundreds of entrants to the competition making a £2 donation. Indeed, many generously donated significantly more -over £1,000 has been raised to date. 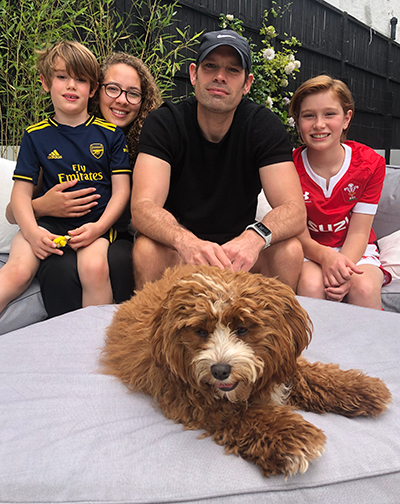 The winning video shows one-year-old Cavapoo, Nala, as she attempts to catch a bird in the garden, and Andrew describes her as having “the stealth of a sofa moving across the lawn.”

Her owners Joe (43) and Ruth (41) Daniels, from Chingford in Essex, who have three children Caspar (10), Milla (18) and Arthur (6), were thrilled to win this competition and love Andrew’s commentary.

Initially Ruth was wary about getting a dog but bowed to pressure from Caspar, and now they can’t imagine life without Nala as she’s brought so much happiness to the family.

Joe Daniels said: “I wasn’t aware of Dogs for Good as a charity before lockdown and the competition has been a lovely introduction to the very special, life-changing work it carries out.

“Nala’s a funny little thing and has a lot of character.  She’s playful, determined and very much her own dog.  During lockdown, she’s kept us all entertained in a number of ways and when she does her ‘bird dog’ thing, it’s turned into something of a family spectator sport.

“Andrew’s commentary is perfect and he’s done Nala’s efforts proud. The build, the tension, the humour, the whole nine yards.  It’s such a special thing to have happened during lockdown and is a memory that we’ll really treasure.”

Andrew, who is originally from Troon, Ayrshire, and now lives in Cheshire, was made aware of the charity Dogs for Good by his friend and professional golfer, Eddie Pepperall, and Sky Sports presenter, Sarah Stirk, already an ambassador to the charity.

He chose Nala’s video because it displays all the attributes of sport.

Andrew Cotter said: “Sport has tension, anticipation, build-up, bursts of activity, concentration and drama and Nala’s quest delivers all of those things.

“Like any serious competitor, she’s absolutely focused on the job in hand and her commitment shines through.”

He added: “I chose to support Dogs for Good because the charity celebrates the inherent good in dogs and champions the power of the human-dog bond.

“It trains dogs to help people with a wide range of disabilities and those partnerships go on to change lives.”

Dogs for Good Chief Executive, Peter Gorbing, said: "We're all really thrilled to have worked with Andrew Cotter on this competition and well done to our very worthy winner, Nala.

"The competition highlights the fact that now, more than ever, dogs have a huge part to play in keeping the human spirit buoyed.  They have anchored so many of us through lockdown by simply being dogs and offering us their unconditional and life-changing devotion.”