A meeting of minds Julie Hill discovers more about the remarkable partnerships being formed between veterans and rescue dogs.

Those who serve in the armed and emergency services are often exposed to traumatic incidents, and these can result in them developing post traumatic stress disorder.

PTSD is individual in nature, but can include debilitating symptoms and leave sufferers struggling to live a ‘normal’ life. But, having a specially trained dog by their side can alleviate the symptoms for veterans, and enable them to enjoy life again.

Service Dogs UK matches veterans suffering from PTSD with rescue dogs, thereby improving life at both ends of the lead. 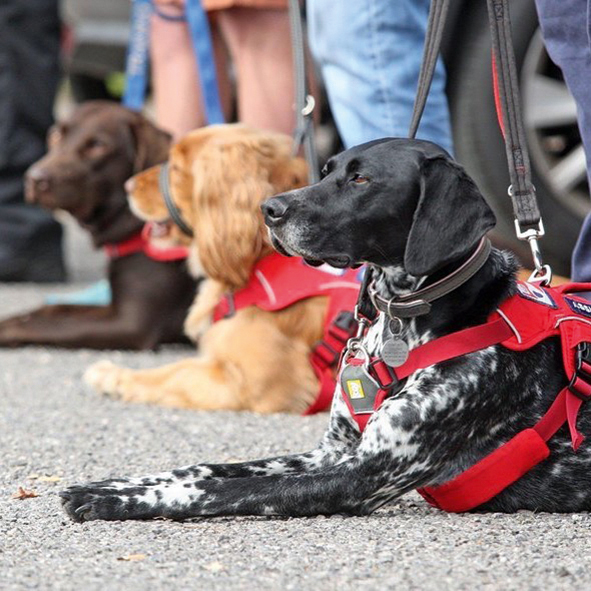 These dogs have an incredible ability to alleviate PTSD symptoms.

“Our dogs have got to be really people motivated,” explained Garry Botterill, who founded the charity in 2015, having served in the Royal Navy for six years and then as a frontline police sergeant.

Garry and his team have a specific criteria when it comes to selecting dogs. “First, we’ll just sit there and see what the dog does — whether they come up to us, or are more happy sniffing the room and checking out toys on the floor. The ones that come over and want to play, get attention, and affection tend to be the dogs that work for us.”

Tapping into the dogs’ innate empathy is crucial to the programme. “The successful ones switch on to somebody’s mood and, quite naturally, nuzzle, lick, or nudge to break the state of mind that person’s in at the time,” said Garry.

Nigel Roussell is the charity’s south west hub manager, and has been on board since the start. He said: “We’ve got a good rapport with local Dogs Trust rehoming centres. They identify dogs they think would be suitable for us. We’re looking for dogs that want to bond with people — with strangers. We don’t really worry about the ‘wrinkles’ that come along with it — if they’re a bit naughty on the lead, or bad at recall — because that can all come out in training later.”

Once identified as having potential for the programme, the dogs are placed with a foster family. “The family have undergone some training with us and are able to settle the dog in, start environmental training, and see what they’re like on a lead, and in traffic,” explained Nigel.

“Once the dog has settled in for a couple of weeks, they start attending the training centres, alongside veterans already matched with dogs, so they’re part of the team.”

Training is all reward-based, which can be food, play, or attention. Dogs and veterans initially meet at the twice-weekly training sessions, and find out who works partcularly well together.

“This is where the charity works really well and becomes unique, because we’re training the veteran and the dog together,” said Nigel.

The veterans training their own dogs is a key part of the approach, and the charity is justifiably proud of the high standards they have achieved. Service Dogs UK is the only Assistance Dogs International (ADI) accredited PTSD assistance dog charity in the UK. Affiliation to ADI amounts to a hallmark of quality.

Garry understands people’s desire to train their own assistance dogs, but highlighted the need for accreditation. “The dog’s welfare is paramount, and the person is supported for the lifetime of the partnership. There are independent checks on whether the dog is still enjoying the role, so it’s having an extra level of care to ensure that everything is done in the best interests of both the recipient of the dog, and the dog.”

Read the rest of the feature in the April 2022 issue. Buy the latest digital edition and read instantly on your computer, mobile or tablet device.

Prefer the print edition? Subscribe today for just 99p and get a free gift!