Kelly Felstead visits the white chalk cliffs of Eastbourne in East Sussex, and enjoys a walk along the South Downs Way...

Stretching 100 miles from the cliffs tops at Eastbourne, to the ancient city of Winchester, Hampshire, the South Downs Way is a mix of contrasting landscapes and spectacular views.

It follows the old routes and droveways along the chalk escarpment and ridges of The South Downs National Park.

The trail is unique because it is the only National Trail which runs entirely within a national park — The South Downs National Park. The route passes by or through five National Nature Reserves and many Sites of Specific Scientific Interest.

The South Downs Way has been travelled for thousands of years; early Man hunted on the chalk ridge, and during the Iron Age tribes built large forts on its highest points. Shepherds would also move their vast flocks of sheep along the route.

At the eastern end of the trail lies the Eastbourne Downland of the South Downs which consists of open access downland and tenant farmland.

The walk that I sampled was a circular route around Beachy Head. The entire route is made up of two loops — one loop between Eastbourne and Beachy Head and the other loop near Birling Gap, linked by the South Downs Way.

The route was recommended by the South Downs Way National Park Authority for its views, the fact that most of the coastal stretch of the trail isn’t grazed, and because there are lots of options to cut the walk shorter.

The area between Beachy Head and Birling Gap is part of a Voluntary Marine Conservation Area and is described as being one of the most unspoiled environments on the Downs.

1. Start at the South Downs National Park in Eastbourne, situated just off Duke’s Drive and adjacent to Bede’s Prep School; the South Downs Way is clearly signposted from the street. You will see a large grassy hill in front of you. There is an information board at the start of the walk which gives details about the route and area. Turn left following the signpost for Whitebread Hole.

As you walk along the grass footpath, turn around to take in the stunning views of the sea and Eastbourne behind you. Continue heading straight on. There is lots of green open space here and you will soon see some rugby goal posts on your right. Beware of the edge of the cliff on your left; keep your dog on a lead. I used the opportunity to practise my Cocker Spaniel Henry’s heelwork. You will eventually come to some steps; go down them.

2. Follow the path straight on towards Cow Gap where there is access to the beach. Unfortunately, Henry and I were unable to get to the beach because the tide was in. Be careful if you decide to visit the beach as there is a risk of rock falls and rising tides; take a quick look before returning the way you came to rejoin the circular walk. From here, continue heading parallel to the sea until the path turns right and heads eastwards to meet the South Downs Way.

This area is very open — make sure you keep your dog on a lead near cliff edges for safety. The path starts to go uphill and it is a very steep climb to reach the top, but the views are breathtaking. Take a rest mid-climb to fully take in the views around you.

3. When you reach the top of the hill there is a junction of footpaths. If you fancy doing the full circular walk — which is eight miles in total — turn left along the cliff tops, heading towards Birling Gap. If you intend to only walk the shorter loop, turn right at the junction and follow the National Trail waymarkers back into Eastbourne.

4. Even if you don’t want to do the full eight miles you can still explore the area around Beachy Head a bit more before heading back to Eastbourne, which is what Henry and I did. We turned left at the path junction to follow the South Downs Way along the cliff tops, where there are several interesting landmarks to investigate. During the Second World War, Beachy Head was the major outbound operational route from the UK for airmen in RAF bomber command; there is a war memorial dedicated to those who fought in the skies, on the crest of the hill.

Further along, you will come across a signalling watch tower which was leased by the Corporation of Lloyds from the Duke of Devonshire in 1882. The eye-catching red and white-striped Beachy Head Lighthouse is also visible below the cliff edge. If walking and exploring has made you peckish, why not stop for a drink and bite to eat at The Beachy Head? Dogs are welcomed in this cosy pub; Henry was even offered a biscuit by a member of staff. The pub is next to Beachy Head Countryside Centre, which has a shop, gallery, and exhibition.

5. To return to Eastbourne, retrace your steps on the National Trail back to the path junction at point three. Continue to follow the waymarkers for the South Downs Way, which takes you on to a windy gravel track on the ridge of the hill. It can get quite muddy along here. As you walk along the path, look down to see your outward route.

6. After a while the path splits in two; follow the South Downs Way waymarker to the left. The track turns into a grass path and leads back to the start of the circular walk. The hill at the end of the walk is quite steep but offers great views over Eastbourne. 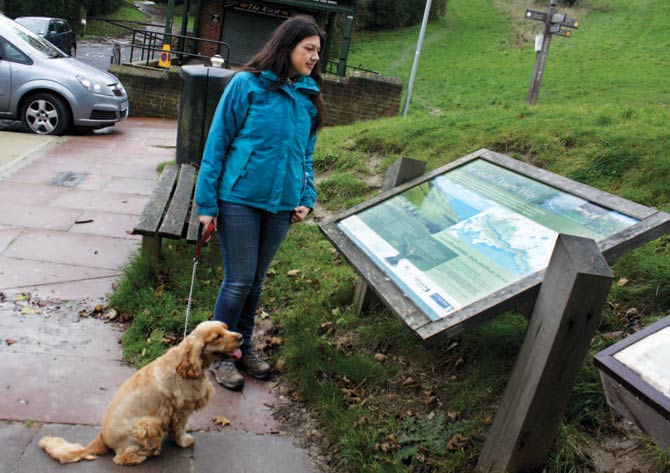 Eastbourne and the local area

Eastbourne has many hotels and self-catering accommodation which welcome dogs, so you and your canine friend can enjoy a longer stay in the East Sussex seaside town if you want to investigate it further.

Between May and September, dogs must be on a lead on the entire seafront, and the promenade from Holywell to Langney Point. However, they are allowed to be off the lead on the Western and Middle Parades.

Helen Garden, which is situated below the Downs at the west end of the seafront in Eastbourne, is a lovely setting for a dog walk with magnificent views over the sea and Victorian pier.

You can also take your dog on a boat trip across the bay at Eastbourne and towards Beachy Head and Birling Gap — ideal for seeing the area on the National Trail from a different perspective. Journeys are operated by Sussex Voyages between April and October.

Beachy Head is the highest chalk sea cliff in the UK, standing 530ft above sea level. The cliff faces southwards and is subjected to fierce gales and erosion from the sea. The area of Beachy Head has been the site of various battles over the centuries. During the 17th century, Beachy Head was the scene of two major naval engagements; in 1653, the third day of fighting in the Battle of Portland happened here, and in 1690, the Battle of Beachy Head took place during the Nine Years’ War.

During the Second World War, the RAF established a forward relay station at Beachy Head to improve radio communications with aircraft. Enemy aircraft were often spotted over and around Beachy Head en route to or from raids on London and the south of England.

The South Downs National Park Authority encourages people to use public transport where possible; there is a regular bus service running from Eastbourne to Birling Gap, so there might be the option to walk half of the circular walk and get the bus back. However, dogs are allowed on buses at the discretion of the driver.

In some areas, the South Downs National Park has experienced a problem with irresponsible owners. Dog walkers are asked to follow the Countryside Code and keep dogs under close control at all times.

How to get there: Eastbourne is situated in East Sussex; take the A22 off the A27.

Distance: Around 4 miles (8 miles if you complete both loops).

Parking: There is pay and display on-street parking along King Edward’s Parade and Duke’s Drive, which is a short stroll from the start of the walk; BN21 4DG.

Toilets: Public toilets are situated in Helen Garden next to Duke’s Drive in Eastbourne. There are also toilets along the route at the Beachy Head pub.

Suitable for: Reasonably fit dogs and owners as the route is quite challenging in places.