Enjoy a walk along the Pembrokeshire Coast Path, described as one of the world’s finest long-distance routes and certainly not for the faint-hearted.

We headed west to walk part of the Pembrokeshire Coast Path, from Saundersfoot to Tenby, with Your Dog editor Sarah Wright, and Norfolk Terrier Bertie.

Twisting and turning its way along 186 miles of spectacular coastline, the Pembrokeshire Coast Path presents a formidable challenge — its 35,000 feet of ascents and descents is said to be the equivalent of climbing Everest!

But for those who prefer their walks to be less demanding, the path can be enjoyed in short sections and there are many circular walks to explore that incorporate parts of the trail.

The Pembrokeshire Coast Path runs from St Dogmaels in the north right around the Welsh coast to Amroth. It opened in 1970 and was the first National Trail in Wales. Most of it lies within the boundaries of the Pembrokeshire Coast National Park. Famed for its spectacular scenery and abundant wildlife, the area has a rich history with many reminders of its maritime traditions, dating back to the early Celtic saints and beyond.

The Viking influence is reflected in some of the place names, while all along the trail the small quays, warehouses, and remains of lime kilns are reminders of Pembrokeshire’s industrial past.

John Burns, Your Dog contributor and founder of Burns Pet Nutrition, is based in Kidwelly, Carmarthenshire, not far from the coast path. “The beginning (or end) at Amroth is only 40 minutes away. I haven’t attempted to walk the entire path in one go, but I can dip in and out when it suits me,” he explained. “The views are spectacular and there is plenty of variety. Some sections are a stroll; others can be quite strenuous, so there’s something for everyone, and, of course, it’s great for dogs.” 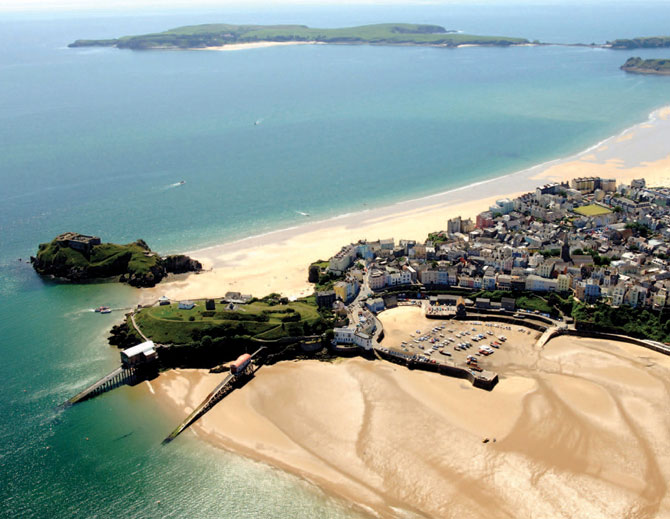 1. Start from the harbour car park in Saundersfoot. If the tide is out you can walk along the south side of the harbour, and down on to the beach. Then bear right over the sand and rocks to walk up the concrete steps on your right and join the trail. If the tide is in, you’ll need to head up the coast road (the B4316 towards Tenby) and follow it up the hill. As the road climbs away from the harbour, you’ll see a minor road to your left. Take this and it will bring you to the coastal path.

2. Once you’re on the trail, the route is well signposted and easy to follow; look for the National Trail acorn signs. You’ll pass Swallow Tree Garden Leisure Park on your right. The path takes you through Rhode Wood with spectacular views down to the beach on your left.

3. Descend through the trees to a stream, cross, and climb up the other side. The route undulates throughout this walk with some steep uphill climbs and descents.

4. At the top of the climb you’ll come to an open field. Keep left and follow the field boundary to a gate. Shortly after this the path bears left to Monkstone Point. You can cut across the point or follow the offshoot paths around the point itself, where you will be rewarded with panoramic views of Saundersfoot and Amroth to your left and Tenby and Caldey Island to your right. You can also gain access to Monkstone Beach from here, which lies to the south of the point and is dog friendly.

5. From the point the path heads inland and takes you through several fields, from which there are impressive views of Tenby across the bay. The route passes through more woodland, including some steep steps.

6. Eventually the path takes you down into the valley of Waterwynch, dropping almost to sea level. Take care as you will need to cross the road near the Waterwynch Hunting Lodge before climbing out of the valley on a steadily inclining paved path — benches along the route might provide a welcome break here!

7. Keep following the route and eventually you will pass Meadow Farm on your right and reach a minor road into Tenby. Follow this, passing the Park Hotel on your left, until you reach North Beach, also on your left. Depending on the tides and time of year (dogs are not permitted on the beach between May 1 and September 30), you can walk across the sand towards the town, otherwise keep following the road towards the harbour.

8. To return to your car, you can retrace your steps or do what we did and get a taxi. Tenby Taxis was happy to take a small, muddy dog, but always check beforehand. Alternatively there is a bus service from Tenby to the harbour in Saundersfoot. Check with the Tenby Tourist Information Office for times but be aware that taking dogs will be down to the individual driver’s discretion.

Tenby and the local area

Tenby’s hilltop position saw it developed as a Welsh stronghold and in medieval times it was the site of a Norman castle, of which only a small tower remains. It sits on top of Castle Hill almost entirely surrounded by the sea. The town walls fared better and parts of them, dating back to the 13th century, still survive today, making up the picturesque old town. More recently, in the early 19th century, the town became a fashionable holiday destination for both the Welsh and the English.

There are many dog-friendly pubs in Tenby. Check out www. tenbyvisitorguide.co.uk to find out more. We lunched at the Hope & Anchor before taking our taxi back to Saundersfoot. The pub is near the harbour and has a front-facing beer garden where you can sit and eat with your dog. Alternatively, there is an upstairs family room (for when the weather is poor) where well-behaved dogs are also welcomed.

Caldey Island lies off the coast near Tenby and has been home to various orders of monks since Celtic times. It is now owned by monks of the Cistercian Order, whose monastery overlooks the village green. Boats sail regularly from Tenby to Caldey, from Easter to the end of October, and well-behaved dogs on leads are welcomed on the island.

On Monkstone Point there are the remains of what might have been a monk’s cell linked to Caldey Island’s monastic settlement.

Terrain: The path follows the coast and is well maintained but can get muddy in places. Undulating route; lots of steps.

Off-lead opportunities: Plenty, but the path crosses several fields where there may be stock, so keep your dog on a lead here. Also where the path runs close to the cliff edge.

Parking: The car park near the harbour in Saundersfoot; it costs £5 to park for the day.

Toilets: Near the harbour in Saundersfoot and in Tenby.

Suitable for: Reasonably fit dog owners and their pets, who can cope with the steep uphill climbs and descents.