Michael Hallam travels back in time to discover an abandoned medieval village on the Yorkshire Wolds Way, accompanied by Tom Barnes, from Walcot, Lincolnshire, and his Jack Russell Terrier, Treacle.

From the Humber estuary to the seaside town of Filey, the trail bends its way through nearly 80 miles of the Yorkshire Wolds. At Filey, the trail joins the Cleveland Way — another National Trail featured here on the Your Dog Holidays website.

The trail encompasses dramatic views and tranquil scenery as it passes through the chalk landscape, taking in open fields, gentle hillsides, and wide dry valleys.

There is a rich heritage on the trail too. From The Green Dragon Inn, the arrest site of notorious highwayman Dick Turpin, and Londesborough Park, the former grounds of a demolished manor house, to the incredible Humber Bridge, the route has a diverse history to reveal.

We walked a linear route and explored one of the most compelling sites on the trail — the deserted medieval village of Wharram Percy.

The village was a thriving community up until the 16th century when the last residents were evicted. It is one of the most researched sites out of the estimated 3,000 deserted medieval villages in Britain. Today, the remote village is a tourist attraction protected by English Heritage.

There is no charge for visiting and you can explore at your leisure with your dog on a lead.

Trail officer Malcolm Hodgson recommended selecting a walk from the Top 10 Trail Experiences on the Yorkshire Wolds Way website. Wharram Percy was chosen as one of the best attractions on the trail. Visitors can print off a map of the route at www.top10trails.com

For more information about the National Trails, including the Yorkshire Wolds Way, visit www.nationaltrail.co.uk

1. Leave the Wharram Percy car park and follow the sign for the footpath to the deserted village through the gap in the hedge. At the beginning of the path is an information board about the village and what makes it so significant.

2. Follow the path as it descends through a farmer’s field. Take care as the path is quite rocky and steep. As it bends slightly to the left you’ll arrive at a gate. Go through the gate and continue until you reach a second gate which enters a small field.

3. Cross the field. Do not head for the large bridge but go through the small gate to the right of it. Walk down the steps and cross the footbridge over a stream which leads to a wide track.

4. At this point you have a choice: you can either head straight over the track to visit Wharram Percy, or turn right and walk along the track, which is a former railway track, to the disused quarry, which is now Wharram Quarry Nature Reserve.

5. We decided to explore the village. Cross the track and go through a gate to the left of an English Heritage sign about Wharram Percy. You must ensure your dog is on a lead, as there might be cattle about. On our visit, there was a herd of cows in the field which took an interest in Treacle, so Tom kept her under close control. Follow the farm track up a gentle climb until it splits in two. Keep left and head down towards a cottage.

6. On your left you will see an information board about the cottage and the extensive research that has taken place at the site. The cottage was used as the base for archaeologists who worked on the site. Go through the wooden gate into the village.

If you turn left you can walk round the edge of the cottage. Continuing on, you will see the outline of an old dwelling to your right and the medieval church straight ahead. In front of the church is a sign with information about the church, its graveyard, and how archaeologists discovered more than 700 medieval skeletons at the site. It details some of the interesting discoveries the team made such as how medieval surgery was more advanced than originally believed. One villager was found to have taken a blow to the head. A section of the skull was cut out to allow for the swelling of the brain, and the patient lived for many years after the surgery. 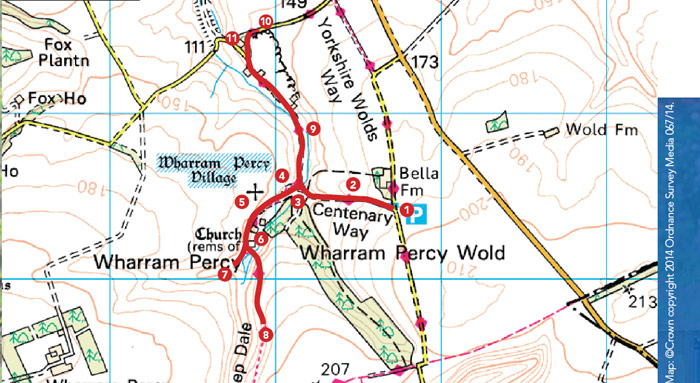 The ruined church is really impressive, as most of the structure is still standing. Open the large wooden door and head inside where there is another information board about the church. It details how the church would have been built and enlarged during the village’s heyday.

At the bottom of the church lies one of the oldest medieval gravestones which is attached to the wall. Leave the church and head into the graveyard which has many different headstones, tombs, and monuments.

7. At the end of the graveyard furthest from the church there is a gap leading to a pond. Before heading through the gap, turn to your right where there is a small gate. Go through the gate and climb the hill to take a look at the outlines of some of the farmsteads and houses which would have been there. There is another information board about how families would have lived in these houses.

Return back to the site and walk through the gap to the pond. You can walk around the pond and cross the footbridge which runs through the middle. There is an information sign on your left as you first approach the pond which tells how the water was originally a stream to help power mills for making flour. There is a picture of what Wharram Percy would have looked like as a thriving settlement.

8. Once you have explored the village, continue the walk by going through a gate to the right of the information board for the pond. There is an English Heritage sign next to the gate. The route is signposted for the Yorkshire Wolds Way.

Climb the hill for great views looking back at the village. Continue on the path and you’ll be rewarded with breathtaking views of the vast dry valleys. Walk as far along the hillside as you wish before retracing your steps back through the village to the track described at point 4.

9. Once you’ve rejoined the track, if you feel you have walked far enough you can take the footpath back to the car park. If you turn left, you can head along the track towards the disused quarry. This is a great opportunity to let dogs off the lead. Treacle enjoyed stretching her legs and with the track being long a fairly straight, Tom could still keep an eye on her.

As you head along the track you will see a variety of buildings on your right associated with the old railway line, which used to take chalk from the quarry. Head along the track for a kilometre, passing houses on your left and right, until you join a road.

10. Turn right on to the road and follow it, as it bends to the left and then right up a hill. On your right is a small gateway to the disused quarry which is now is a nature reserve. Dogs are not allowed in the nature reserve but it is worth a visit to get a sense of the industry that would have taken place here and how the track would have been a busy railway.

11. Retrace your steps along the track to the small footbridge where you first joined the track. Cross the bridge and head back up the hill to the car park.

Wharram and the local area

Wharram Percy is protected by English Heritage but there is no admission charge to enter. You can find out more about the village with the Wharram Percy History Detective Tracker Pack which is produced by the National Trail. As well as providing extra information, the pack has lots of fun activities for children as they explore the village. The packs can be hired from the Robert Fuller Gallery in the nearby village of Thixendale for £5.

Less than 10 minutes from Wharram Percy is Life Hill Farm, a working farm which has dog-friendly accommodation. You can stay in the 18th century Georgian farmhouse with great views over the wolds. The owners are happy to look after dogs while you visit local attractions.

The Middleton Arms is a dog-friendly pub in North Grimston. Dogs are allowed in the bar area where you can order food. The pub is open daily from 11.30am but is closed during the afternoon between 3pm and 6pm.

The ruins of Kirkham Priory in Malton is another English Heritage site. There is a small charge for admission and dogs on leads are welcome in the grounds.

How to get there: Wharram Percy is a short drive from the village of Wharramle- Street, situated on the B1248.

Terrain: Mostly tracks and footpaths, although some sections through fi elds can get muddy. There are a few ascents and descents.

Off-lead opportunities: Plenty, but you must keep dogs on leads while at Wharram Percy.

Parking: The Wharram Percy deserted village car park is free to park at and is signposted from Wharram-le-Street.

Toilets: There are no toilet facilities but the Middleton Arms pub is located in the nearby village of North Grimston.

Suitable for: Most dogs and owners. Some of the climbs may be difficult for dogs or people with mobility problems.