Kelly Felstead heads to Devon to walk a section of the South West Coast Path...

Whether you love a stroll along the coast or a rural ramble through valleys and over rolling hills, the British countryside offers something to suit all tastes.Britain’s 15 National Trails allow you to get out and about and discover new territories, or parts of the UK you might not normally visit.Your Dog paid a visit to Devon to discover the delights of the South West Coast Path.

At 630 miles long, the South West Coast Path is Britain’s longest National Trail. It stretches from Minehead in Somerset to Poole Harbour in Dorset, taking in the coast of Devon and Cornwall. With rugged cliffs rising from the sea and waves lapping against sandy shores, the trail is extremely popular and many people choose to walk the entire route. The South West Coast Path encompasses some of the finest coastal landscapes in England and Wales, including Dorset’s Jurassic Coast, Land’s End in Cornwall, and Exmoor in Devon. The trail also gives walkers the chance to explore pretty fishing villages.

Dogs are actively welcomed on the South West Coast Path — you will stumble across an array of dog-friendly beaches, pubs, cafés, and other attractions along the path. However, remember to keep your pet under close control near cliff edges. The Brixham and Berry Head circular walk on the south Devon coast — featured here was recommended by the South West Coast Path team as a great introduction to the trail and its stunning views. Berry Head is a prominent landmark in this part of Devon.

1. The walk begins at the William of Orange statue in Brixham, which is close to the town’s tourist information centre and the replica of the Elizabethan ship, the Golden Hind. The statue was built in the Victorian era to commemorate the landing of William of Orange — later King William II — in Brixham in 1688.

2. Turn up Fore Street, opposite the statue, walking past the Blue Anchor Inn and along the pedestrianised part of the street. You are now in the centre of bustling Brixham where many shops and banks are situated. The original town was based further inland.

3. When you get to the traffic lights at the end of the road, turn left on to Bolton Street. Continue going straight to another set of traffic lights. Walk straight ahead on to Greenwood Road. You will see Higher Brixham Church ahead; this marks the site of the original town centre which was positioned away from the coast for protection.

4. You will pass Brixham Hospital on your left, then take the next turning on the left, Castor Road. Follow the road ahead; the road levels out at the junction with St Mary’s Road — you will see a large tree in the middle of the junction.

5. Turn left here, walking along St Mary’s Road and following it as it bends to the left. Fork right at the junction just after South Bay Holiday Park. Keep going straight on. The road eventually becomes an unsurfaced green lane.

6. Follow the lane and go through a kissing gate, where the track turns to the left and narrows. When you get to another kissing gate, go through it and bear left. You will come to an open field with the coast on your right. Walk straight on and branch right towards a gate ahead.

7. The walk has now reached the South West Coast Path, which is followedback to Brixham. You are on the south side of Sharkham Point — a spot with stunning views along the coast to Scabbacombe Point. Stop to admire the views, the greenery and wild flowers, and take in the tranquil atmosphere. There are a couple of benches here if you want to sit and rest for a while.

9. Go through another kissing gate on to a green lane and turn right. Follow this path, signposted Berry Head, as it climbs steadily up the cliff and skirts the rear of St Mary’s Bay between the two headlands. 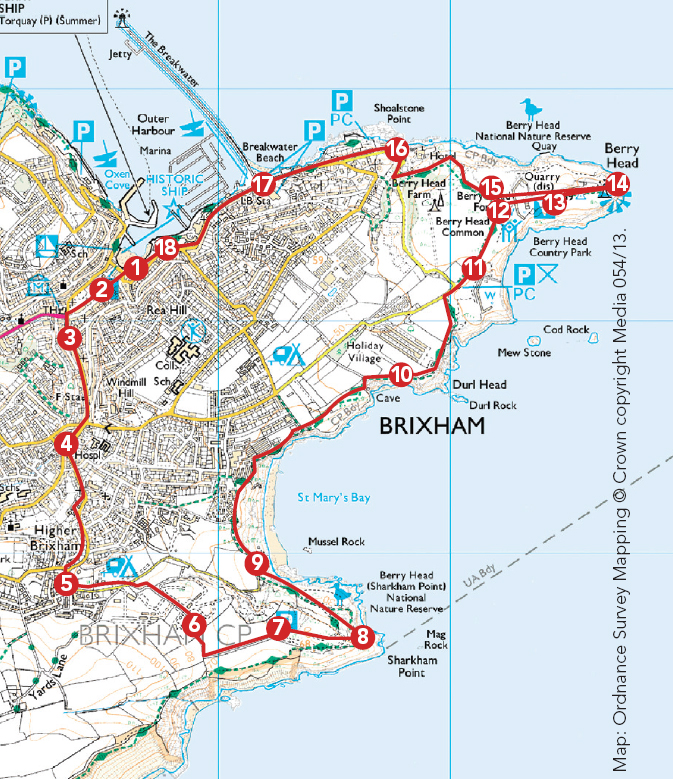 10. Continue to follow the coast path — keeping right at the junction to continue along the cliff top — behind Durl Rock, which protrudes from the cliff. You will come to a couple of wooden stiles, one of which has an opening at the bottom for dogs. The path soon rises towards some stone ramparts ahead. Turn left when you arrive at a path in front of the ramparts. Follow this path to another T-junction.

11. At the T-junction, turn left and follow the path along the cliff top. The route continues towards the main headland at Berry Head.

12. Walk towards the entrance to the main fortifi cations on Berry Head. The apparatus on your left is a radio navigational aid, forming part of the UK’s Air Traffic Control system, which covers a range of 80 nautical miles.

13. At the junction at the fort gate, turn right into the fort. If all the walking and climbing has made you thirsty, stop for a pit stop at thedog-friendly Guardhouse Café. My Cocker Spaniel, Henry, received lots of fuss from staff and was given some doggy biscuits — well appreciated after our walk. There were several other dogs inside the café.

14. Walk to the end of the headland where you will discover more breathtaking and awe-inspiring views. At the end of the headland, the view encompasses the whole of Tor Bay and beyond to the red cliffs of the East Devon coast. In the opposite direction, you can look out back to Sharkham Point with Scabbacombe Head beyond. Berry Head lighthouse on your left was built in 1906. The lighthouse has a reputation for being the highest and lowest lighthouse in the country; the highest because it is built at a height of 60m, or nearly 200ft, above sea level, and the lowest because it is only 45m (15ft) high, to avoid being obscured by mist and low cloud.

15. When you’ve finished exploring the sights, return to the fort entrance and follow the path ahead. Bear right at the junction, following the sign to Brixham. Follow the path round the rear of old quarries as it becomes gravelled and descends through woods. Continue down some steps on your right which lead out on to a road. Turn right here. You’ll pass a hotel on the right. This was built as a military hospital during the Napoleonic period. It later became the home of the vicar of Brixham, Reverend H.F. Lyte, who wrote the famous hymn ‘Abide With Me’.

16. Keep walking straight along the road to the Shoalstone car park. Turn right here, walking through the parking area and down some steps, to a path above a swimming pool. Follow this path until it climbs back to the road. Turn right along the road. Keep an eye out for some steps opposite Devoncourt flats; go down these steps and walk to the end of Brixham breakwater. The breakwater — some 3,000ft in length — was built in 1893 and extended in 1909 and 1912.

17. When you reach the breakwater turn left and follow the path through the parking area behind the marina, signed to the town centre. Continue to the inner harbour.

18. Follow the path round to the right to return to the William of Orange statue at the start of the walk.

Brixham and the local area

The beach at St Mary’s Bay — which the coast path passes — to the East of Sharkham Point is dog friendly all year.

How to get there: Take the A379 south from Torquay and follow signs to Brixham.

Time: Three and a half hours.

Toilets: Public toilets in Brixham. There are also toilets at the Guardhouse Café on Berry Head.

Suitable for: A moderate-level walk suitable for most people.