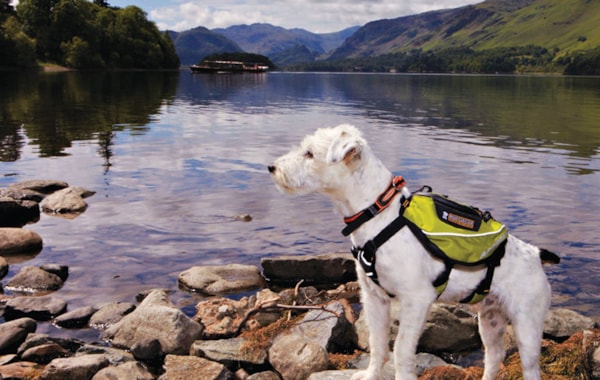 Covering 885 square miles, the Lake District National Park is the largest of England's national parks. It includes one third of the county of Cumbria from Caldbeck in the north to Lindale in the south and from Ravenglass in the west to Shap in the east.

It has more than 14 lakes and tarns although officially Bassenthwaite Lake is the only titled lake, the rest are ‘meres’ or ‘waters’.

This National Park provides acres of mountainous countryside and great expanses of water. The highest point in the county (and in England) is Scafell Pike. The summit attracts hordes of energetic and adventurous walkers each year.

There are countless tracks and paths around the area, passing many of the 16 lakes and many more tarns along the way. While some routes are more suited to intrepid, fit walkers and their dogs, the Lake District National Park website has a list of 39 open access routes across the park, providing exploratory opportunities for all.

The largest natural lake in England, Windermere can be enjoyed in a boat or from the water’s edge. The 45-mile Windermere Way circles the lake and offers fantastic scenery, although some sections of the path run close to the water’s edge while other parts on the road, so close control of dogs may be required. On the water, dogs are welcome on board all four of the Windermere Lake Cruises routes – they also offer a special ‘walkers’ ticket for those wanting to enjoy sections on the Windermere Way.

Further walking routes across the area include: The Cumbria Way, the Dales Way and the Pennine Way. There are many National Trust and privately owned estate grounds and gardens to be enjoyed with dogs too.

While the coast may not be the first thing you think of when visiting Cumbria, its shores offer more than you realise. The industrial past and present of this stretch of the coastline is clear but there are some real jewels along the Cumbrian Coast. Peil Castle on Peil Island is about 3.5miles from Barrow-In-Furness, it’s an English Heritage property and can be accessed via a boat in the summer. The boat is not operated by English Heritage.

CLICK HERE FOR FURTHER INFORMATION ABOUT CUMBRIA AND THE LAKE DISTRICT