There’s nothing quite like the British landscape — walkers exploring the countryside will encounter rugged coastline, green rolling hills, and centuries-old monuments waiting to be discovered.

One of the UK’s most recognisable ancient ruins — Hadrian’s Wall — runs along one of the National Trails. We headed north-west to the Solway Coast to discover the charm of one of the lesser-known sections of the Hadrian’s Wall Path.

The 84-mile Hadrian’s Wall Path stretches from England’s east coast to the west, from Wallsend in Tyne and Wear to Bowness on Solway, in Cumbria. Walkers can begin the trail at either end.

In the east, the trail follows a riverside route in Tyneside and winds through farmland in Tynedale. It descends to the rich pastures of Cumbria and eventually the marsh of the Solway Estuary in the west. Along the trail, walkers will stumble upon some of the UK’s most breathtaking views, encompassing rolling hills, moorland, and vibrant city landscapes. However, the trail is more than just a beautiful, scenic walk. It was inspired by the greatest monument from Roman Britain — Hadrian’s Wall.

The Hadrian’s Wall Path runs adjacent to parts of the famous Roman wall — a World Heritage Site. The remains of the wall are more evident on certain stretches of the trail. Hadrian’s Wall was the most strongly defended frontier in the Roman Empire. When built by the Romans as a defence fortification from Scotland, Hadrian’s Wall was 73 miles in length, running between the forts of Maia at Bowness on Solway and Segedunum at Wallsend. Roman heritage is still visible on many sections of the trail and walkers can explore numerous Roman forts, preserved masonry, and earthworks. John Scott, management plan coordinator for Hadrian’s Wall Path, recommended exploring the trail between Carlisle and Bowness on Solway.

He said this section was not as well known as central and eastern parts of the trail where the wall was more evident. “People will be blown away by the views at Port Carlisle — it’s a great place to explore. They will get a nice snapshot of the salt marshland. On a clear day, the views of the Scottish mountains in the background are startling" he said. 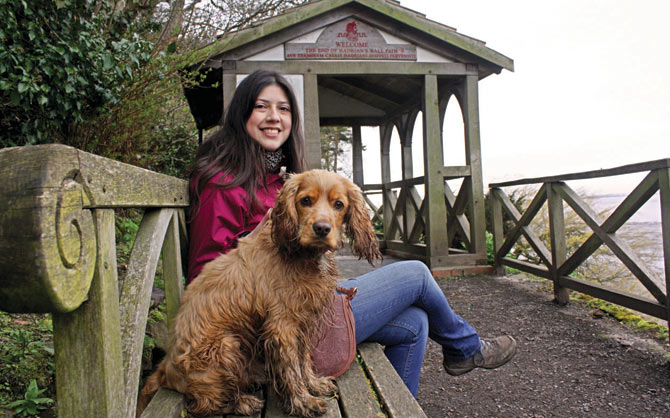 1. It is suggested that walkers start the trail at the Hope & Anchor Inn, which is on the left-hand side of the road into Port Carlisle.

There is no public car park in Port Carlisle but there are lay-bys in and around the village where walkers can leave their vehicles.

Hadrian’s Wall Path is well signposted; you will see signs on your right next to Bowness Marsh. Follow the signs straight on, making sure the marsh is on your right.

There is an area of grassy bank next to the marsh in Port Carlisle — great for off-lead doggy exercise as it is away from the road. The trail crosses the mouth of an old canal lock which was built in the 19th century. Only ruined brickwork remains.

Port Carlisle — originally known as Fisher’s Cross — was developed as a port in the mid-19th century to handle goods for Carlisle using the canal link. The canal was just over 11 miles long and had eight locks. On your left, you will see the ruins of an old railway line which replaced the canal sitting on the shores of the marsh.

2. Heading out of Port Carlisle, follow the National Trail along the edge of the marsh towards Bowness on Solway. The path runs along the road — I kept my Cocker Spaniel Henry on his lead as the road was quite busy with traffic going to Bowness on Solway. I took Henry on to the shores of the marsh where he enjoyed running around in the sand and mud. It was separated from the road by a wall/fence.

Make time to stop and take in the views overlooking the marsh. You will see Scotland in front of you; on a clear, bright day you might even be able to make out the Scottish mountains rising up into the sky in the far distance.

3. When you come into Bowness on Solway you will see a signpost welcoming walkers to the beginning/end of the Hadrian’s Wall Path.

Follow the sign pointing left — this will take you to an area known as the Banks which is 150 yards away.

When you get to the village hall, take the footpath opposite the hall on your right — you will see a brown Hadrian’s Wall Path sign on the wall.

Follow the path. After a short walk you will arrive at the Banks Promenade. Here you will see a Romanesque archway which marks the finish/start of the Hadrian’s Wall Path.

Bowness stands on the site of a Roman fort so you might be able to spot the outline of the Roman fort of Maia. This was the second largest fort on Hadrian’s Wall, measuring 5.8 acres. The unit was a military cohort of 800 Roman soldiers.

It was built over by the modern village but excavations in the 20th century established the outline of the fort’s defences.

Read the information boards describing the history of the Banks and the local area. Sit on the bench next to the archway and admire the scenery.

4. Follow the same footpath back to the village hall. You are now leaving the National Trail. Turn right walking further into the village. Turn left when you get to the King’s Arms. On the pub wall is an information board about Hadrian’s Wall country. Follow the road south. 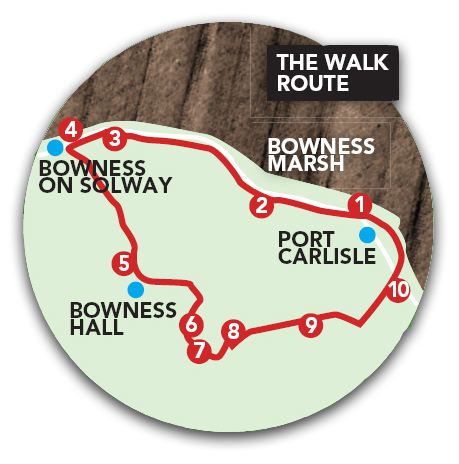 5. Turn left just before you get to Bowness Hall, which is located further along the main road on the right. Fields will surround you and some will contain sheep — keep your dog on the lead if he’s likely to want to give chase.

6. After a while you will come to a wide path on your left — you will see a cattle grid at the start of it. You will also see a yellow waymarker on the fence. Take this path and follow it straight ahead.

7. You will eventually come to some farm buildings. Continue along the path, following the yellow waymarkers. You will be surrounded by fields — continue straight on.

8. You will come to a large metal gate in front of you; turn right where you will enter a field. Turn left immediately and keep going straight.

9. When you get to the end of the field you will see a stile on your left. You might have difficulty negotiating the stile with a large dog. Once over the stile follow the path straight on.

10. After about a mile the path meets the main road at Port Carlisle. The Solway Methodist Chapel will be on your left — cross the road and head away from the village. You will spot a gate on your left leading to a footpath which will bring you back on to the National Trail.

The Solway Coast and local area

The Solway Coast is an Area of Outstanding Natural Beauty (AONB). It is home to a variety of birds, and seals and dolphins can sometime be spotted.

The traditional Solway practice of ‘haaf netting’ — a method of catching certain types of fish — can still be seen in the area today. Bowness marsh is tidal and occasionally floods, so make sure to check tide times before planning a trip.

If you want to stop for a drink or bite to eat at the end of or during the trail, the Hope & Ancor Inn in Port Carlisle and Kings Arms in Bowness on Solway are both dog friendly.

If you have time you can choose to walk more of the Hadrian’s Wall Path.

When you get back on to the National Trail in Port Carlisle at the end of the circular route, turn right heading away from the village.

About six miles from Port Carlisle is the picturesque village of Burgh by Sands. On the village green you will find a monument dedicated to King Edward I.

It marks the site where the English king was killed in July 1307 while on his way north for a last battle with the Scots.

How to get there: Port Carlisle is situated on Burgh Road off the A689 and the B5307 from Carlisle.

Off-lead opportunities: Some, but ensure dogs are on leads near livestock and roads.

Suitable for: There is a stile en route which people with mobility difficulties may find hard to negotiate.