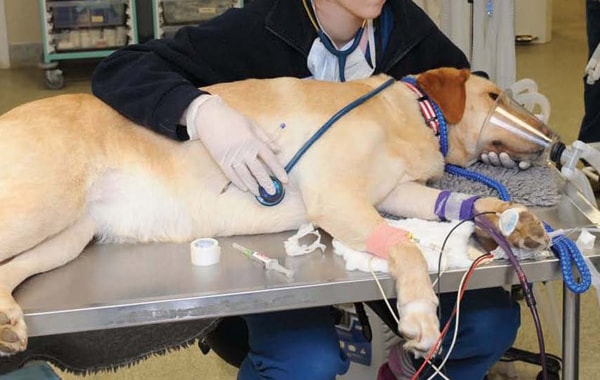 Bloat is a real veterinary emergency which requires fast thinking and rapid treatment to give a dog the best chance of surviving this life-threatening condition.

Acting quickly is key. It is important that owners of breeds particularly prone to bloat understand what it is and how to spot the warning signs. Here's everything you need to know about bloat.

Sometimes referred to as gastric dilation and volvulus (GDV), bloat is a serious acute condition which affects the stomach of some larger dog breeds.

It happens when the stomach is distended with gas which puts pressure on the diaphragm and restricts breathing. The stomach can twist around itself and pinch the connection with the oesophagus. Without treatment it can progress rapidly, causing previously fit and healthy dogs to deteriorate quickly.

It is important for dog owners to be able to identify the signs of bloat as soon as they develop in order to get immediate veterinary help. If you suspect that your dog could have bloat contact your vet for further assessment as soon as possible.

The main symptoms include:

When a case of bloat is suspected, a vet will investigate further to discover exactly what is going on.

This can include examining the dog thoroughly, feeling his stomach and checking the heart, circulation, and other organs. Blood tests may also be carried out. X-rays can show how dilated the stomach is and whether it has twisted.

How is bloat treated?

Treatment aims to relieve the gas build-up in the stomach. A vet will try to decompress the stomach by passing a tube via the mouth into the stomach to empty it. This can be difficult in more advanced stages, so in some cases a sterile needle is put through the dog's skin into the stomach to release gas and allow it to partially deflate. Once the stomach has been decompressed the dog will be stabilised with intravenous fluids and medication.

Surgery can then be carried out to twist the stomach back into its normal position. The vet will assess the stomach wall and spleen for damage at the same time and give relevant specific treatment.

There is a lot of conflicting advice as to whether using a raised feeding bowl reduces or increases the risk of bloat. Sally Everitt, scientific policy officer at The British Small Animal Veterinary Association, said there was not sufficient evidence on the subject.

"There hasn't been a trial to assess the height of feeding on the incidence of GDV in dogs, and the only evidence I am aware of comes from surveys looking at risk factors which are inconclusive," she explained. A study published in 2004 by the Journal of American Animal Hospital Association found that dogs who were fed a large volume of food per meal were at a significant increased risk of GDV.

A study published in 2000 in the Journal of the American Veterinary Medical Association said that having a raised feeding bowl was one of the factors associated with an increased risk of GDV. However a later survey in the same publication stated that although feeding dogs from a raised bowl was strongly discouraged, it had no detectable influence on GDV.

Dog breeds at risk of bloat

Some breeds are susceptible to bloat and the risk of it developing can also run in families. Middle-sized, large, and giant breeds with deep, narrow chests are most at risk.

Breeds that can get bloat include:

If you have a breed that is predisposed to bloat there are a number of things you can do to help avoid the condition:

2. Feeding and exercise times should be separated by at least two hours.

3. Encourage slow eating; putting a toy in the food bowl so your dog has to eat around it helps slow eating, and there are different types of bowls which encourage dogs to eat slower. If you have more than one dog, separate them at mealtimes to avoid competition and fast eating.

5. There is an argument for using foods that don't swell much, such as wet food instead of kibble. If using kibble, it may be best to pre-soak it.

6. Keep a close eye on dogs who are at higher risk of bloat and seek prompt veterinary attention if they display any signs.