How to cope in a canine crisis 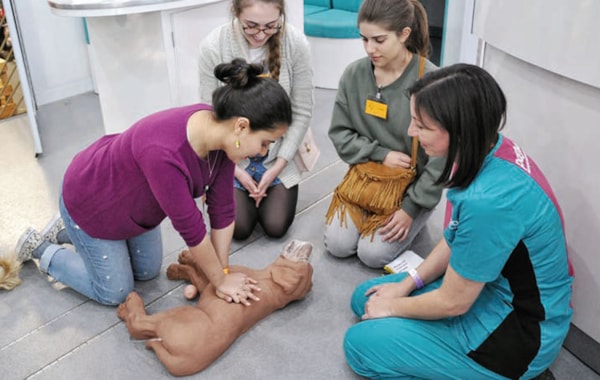 Would you know what to do if your dog started choking? Joanne Bednall tells us how attending a pet first aid course could potentially save a dog’s life...

When Janice Latreche spotted her puppy gasping for breath one day last summer, she knew exactly what to do. Because — by sheer luck — just a week earlier, the 48-year-old housing association community engagement officer had attended a pet first aid course run by PDSA. There, Janice had learned what to do if a dog starts choking, and she was able to put her newly acquired skills into practice. Realising that her Springer Spaniel-cross, Milton, had chewed one of her grandson’s action figure toys, and got it stuck in his throat, Janice, from Oldham, Greater Manchester, didn’t panic.

“I could see that Milton was struggling to breathe and remembered the skills I had learned on the PDSA course,” explains Janice.

“I tried to see if I could pull the plastic toy out but I couldn’t, so I used a technique, which is like an animal equivalent of the Heimlich manoeuvre — and it just popped out.”

As soon as the toy became dislodged, Milton was able to breathe and, after calming him down, Janice took him to be checked by a vet.

“If I hadn’t done the course, I don’t think Milton would have made it as I wouldn’t have known what to do,” adds Janice.

“I’m so grateful to PDSA for everything I’ve learned, and I think a pet first aid course is something all owners should consider doing.”

Since then, more than 1,000 owners, and those who work with animals, have signed up for these informative courses, which take place at community venues around Britain.

Initially funded by players of People’s Postcode Lottery, the courses have proved so popular that they are set to continue throughout 2019. While not intended to replace veterinary treatment, the courses are aimed at everyone, from ordinary owners to dog walkers, and groomers and boarding kennel/doggy day-care proprietors wanting to brush up on their know-how and be better prepared in an emergency. Participants learn how to be ‘first responders’ in case their pet is involved in an accident, suffers a seizure, starts choking, or gets injured.

PDSA vet Olivia Anderson-Nathan says: “Knowing your ABCs — Airway, Breathing, and Circulation — can help you assess a collapsed pet, and give CPR if necessary. And stemming bleeding using firm pressure or a temporary bandage can buy you valuable time until you can get to a vet.”

Contents of a well-stocked pet first aid kit should include:

Coping with a dog emergency

PDSA vet Olivia Anderson-Nathan offers a step-by-step guide to coping with an emergency.

For more information, dates, and locations of upcoming courses, and to book a place, visit www.pdsa.org.uk/petfirstaidcourse