My dog has cancer - what next? Vet Roberta Baxter explains all about cancer in dogs and reveals how new treatments are being developed all the time...

While it may seem more common these days, evidence suggests that even thousands of years ago dogs were suffering from cancer.

The good news for today's dogs, however, is that medical knowledge is developing all the time and, while some malignant cancers still carry a death sentence, many forms of the disease are now successfully treated.

Cancer develops when one or a group of cells spontaneously starts to divide and increase in number, unregulated by normal methods. We still don't fully understand why this happens; however we do know that certain viruses and infections, some genetic factors, various toxins and even some hormones can act as triggers.

Injured or abnormal tissues may be more likely to develop tumours too - in fact any area in the body where cell division is occurring particularly quickly will be more at risk of it getting out of control.

However, even when this happens, all is not lost. The body's anti-cancer cells (such as killer T cells), which patrol the blood, may be able to recognize and kill any abnormal cells, thus preventing the development of a tumour.

Various anti-cancer chemicals in the blood help to prevent tumours developing as well. It is only when the body's defences cannot recognize abnormal cells or are unable to remove them that problems occur.

Skin tumours are one of the most common forms of cancer we see, although many of these are benign. Fatty lumps or lipomas are particularly common in old, plump dogs. These benign masses feel soft and fluctuating and generally they grow slowly and cause few problems.

Some other types of skin cancer, however, are potentially malignant and most should be removed as early as possible so they can be identified and to try to prevent them spreading. For this reason it's always important to get lumps checked out promptly by a vet. The reproductive organs are particularly prone to developing cancer. In entire bitches oestrogen is a recognized trigger for the development of mammary tumours (breast cancer) and each season a bitch has increases the chance of her developing these tumours later in life.

Testicular tumours are not uncommon in old dogs but they are particularly prevalent in un-descended testicles so any dogs whose testicles don't descend should have them surgically removed. Uterine and penile tumours may be seen as well.

Tumours of the internal organs are less common. Those involving the spleen are the most treatable since this organ can be removed with few problems. Liver, kidney, bowel and lung tumours present more problems but may be treatable if they have not already spread by the time of diagnosis.

Those tumours that affect the heart or structures of the nervous system are particularly hard to deal with, as are bone tumours. In some cases the affected area of bone can be removed and a graft inserted or, if a limb is involved, it can be amputated with surprisingly good results - many dogs cope well on three legs.

How tumours cause disease

Obviously, tumours occupy space and can put pressure on other areas of the body thereby reducing their function. For example, tumours in the chest can cause breathing difficulties even if they are not within the lungs; brain tumours can cause reduced brain function and blindness; bowel tumours can cause bowel blockages; and skin or muscle tumours can prevent normal limb mobility. Bone tumours can also cause bone weakness leading to fractures, while tumours in the skin and underlying tissues can grow so fast that the skin cannot contain them and ulcerates, causing bleeding, infection, attractiveness to flies, and a host of other problems.

Other tumours cause disease by spreading throughout the body and damaging the tissues and organs where they grow. Examples include mammary tumours, which often spread to the lungs and affect breathing; lymphoma, which can cause cancer throughout the body; and hemangiosarcomas, which commonly start in the spleen but spread rapidly throughout the abdomen.

Tumours may release chemicals that have effects elsewhere: mammary tumours can stimulate milk production leading to mastitis, a number of tumours can cause electrolyte disturbances or hormonal conditions which lead to ill-health, and some lung tumours stimulate the formation of new bone in the limbs, which can lead to pain and lameness. 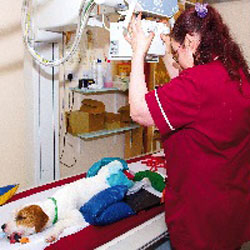 When tumours are removed, vets try to take a margin of apparently normal tissue around the mass to make sure they remove all abnormal tissue. However, this is not always possible as some tumours are close to structures that cannot be removed, such as the spine, or are located in areas where there is a limited amount of surrounding tissue (for example the lower limbs).

Some types of tumour respond well to chemotherapy. This is often used for those that have spread around the body and so cannot all be surgically removed, or those that are carried in the blood. In some cases chemotherapy can be used together with surgical removal or debulking (size reduction) of the primary tumour.

A variety of medicines may be used; some are tablets, others have to be given intravenously in a drip every few days.

The precise procedure depends on the type of tumour involved but the medicines used all work by being toxic to cells and so certain side effects are bound to occur. These may include immune suppression and an increased susceptibility to infections, anaemia, blood loss, and gastrointestinal upsets such as vomiting and diarrhoea, and general malaise is not uncommon.

However, vets generally only use medicines that have minimal side effects, preferring to avoid those that may severely affect an animal's quality of life.

The third main treatment used for cancer is radiotherapy. Like chemotherapy this can work well for certain types of tumour but can also be associated with side effects.

Although some types of cancer are curable, others are not. In these cases, the best that can be hoped for is that the treatment will slow the development of the disease and result in remission, or a temporary absence of symptoms of disease. For those dogs whose quality of life is adversely affected, euthanasia has to be considered. 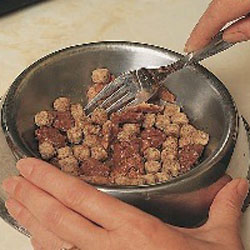 Unfortunately, there's really no way of avoiding cancer; its occurrence seems to be a matter of bad luck rather than bad management. However, giving animals a healthy lifestyle and diet, keeping them fit and avoiding obesity and stress, may help them to avoid a number of types of disease including cancer. And when problems do occur, the more quickly any early signs are checked out by a vet and a diagnosis made, the better the chances of being able to treat the affected dog successfully.

Spaying a bitch reduces her chance of developing mammary tumours. If spayed before the first season her chance of developing mammary tumours is less than one per cent. After the first season this goes up to around eight per cent and after the second season it increases to approximately 26 per cent. Bone tumours are more likely to develop at the site of a previous injury such as a fracture. New treatments for cancer are being developed all the time.