Why does my dog prefer the floor to his bowl? 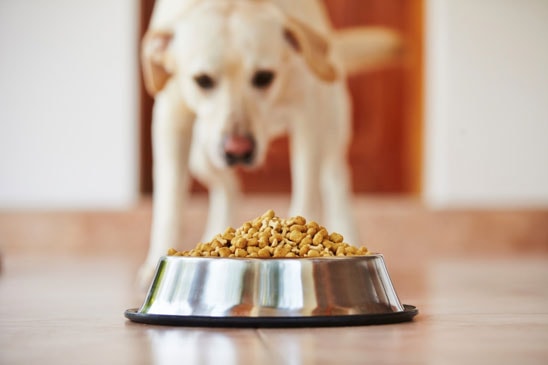 If your dog eats his food away from his bowl, there could be several reasons why. Behaviourist Claire Arrowsmith explains...

Q. Why will my dog eat his food off the floor but not from a bowl?

A. Behaviourist Claire Arrowsmith says: If your dog previously ate from his bowl, then it sounds as though he has made a negative association that has put him off doing so now.

You need to rule out pain and discomfort, so check his teeth are in good condition and that he isn't having difficulty bending or leaning into the bowl.

Sensitive dogs can be worried by the noise their ID tag makes as it taps against their bowl. Removing your dog's collar during feeding times, or choosing a different tag, can help - but it won't necessarily change the associations he has made in the short-term, so that will need addressing separately. Try moving your dog's bowl to a quiet area for him to eat, away from other pets or children.

If you are using a shiny metal dog bowl, try a plastic or ceramic version. A larger than necessary dog bowl can help, as can a dog bowl with lower sides. Some dogs who display fear of a bowl respond well to a flat plate or even a tray.

In the short-term you could continue placing your dog's regular kibble on the floor or in activity toys.

When he is hungry, begin by placing high-value treats into his bowl and leaving them for him to find and be tempted by.

Over several sessions add in a couple of pieces of kibble alongside the treats and see how much he is willing to consume.

Take your time and avoid placing any pressure on him. Waiting around watching him to see if he will eat will make it more likely that he will remain cautious.